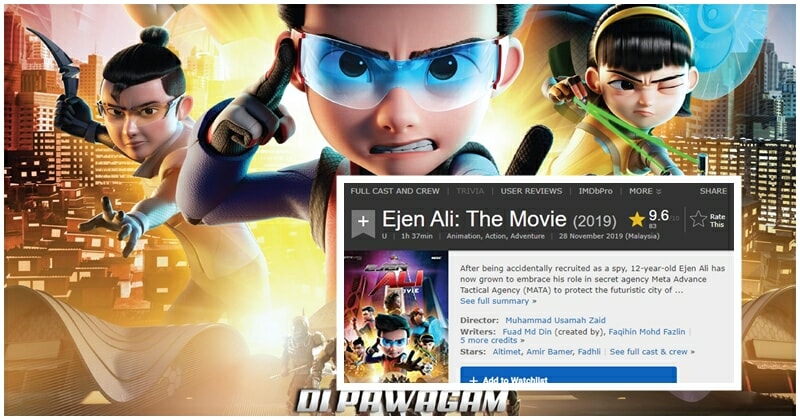 Ejen Ali has finally made it to the cinemas after being aired as a hit TV series three years ago.

The movie, a brainchild of creator Usamah Zaid Yasin, is not only proof of how far we have come in terms of animation, but it has also created many waves locally and internationally.

Going on to Twitter, one netizen mentions that Ejen Ali: The Movie is currently receiving rave reviews from the world’s most popular and authoritative source of reviews, IMDb.

What. Did Ejen Ali just score a 9.5 on IMDB????? Ok I have to sit down. Well done Usamah and Wau Animation. Well done.

Congrats to you guys and to Primeworks Studios.

Excuse me. I need to go cry. #EjenAliTheMovie

In his tweet, @AhmadIzhamOmar writes. “What, did Ejen Ali just score a 9.6 on IMDb? Ok, I have to sit down.”

Not believing what we were reading, we went on to visit the IMDb site to witness ourselves whether or not this is true. 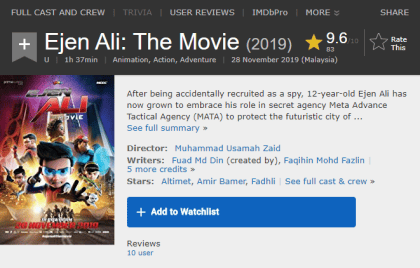 It is in fact not easy to get such a high rating, and from a notable review site at that!

The story which revolves around the adventure of a teen spy working for a secret agency called the Meta Advance Tactical Agency (MATA) named Ejen Ali, the movie seems to have a mission impossible-ish storyline to it.

Surely fun for the family, right?

Most who reviewed the movie on the site gave it nine out of 10 stars, citing that the movie is suitable for everyone.

One respondent mentions that the movie is “full of plot twists and does not mind if the movie is repeated all day!”

Now this is not the first time that Malaysia has produced quality work in the animation department, but we are sure that more masterpieces like this will crop up in the future for the world to take notice.

Surely worthy of your time, maybe it is about time that we give this local animation a chance the next time we have a hankering for a movie night! 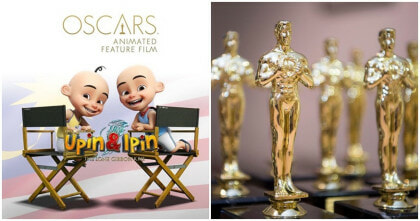