Malaysia has no shortage of kindhearted citizens who are willing to help another citizen in need. Most of the time, they go out of their way to assist as they believe that it contributes to their good karma, living by the saying ‘what goes around, comes around.’

A Malaysian girl took to Twitter to share her story of a kind uncle who seemed like he was rushing off somewhere, but decided to make time to help her and her father. Nebulaaa (@belldybala_) was on her way to a job interview with her father when the incident occurred.

“Today I had a job interview in Bukit Jalil. Of course, as always my father fetched me to the location. After the interview, as we were on our way home, my father’s bike ran out of petrol. He had forgotten to fill up the tank earlier. So we were forced to stop at a bus stop by the side of a fancy apartment building to inspect the bike.”

“How were we going to move my father’s legendary motorbike? The petrol station was quite far away. My father gave me some money to take the Bukit Jalil LRT home but I refused. I stayed and we brainstormed for 5 minutes on where we can find a bottle to carry petrol in.”

Nebulaaa took a picture to prove to her mother that she and her father were going to have a motorbike pushing marathon. 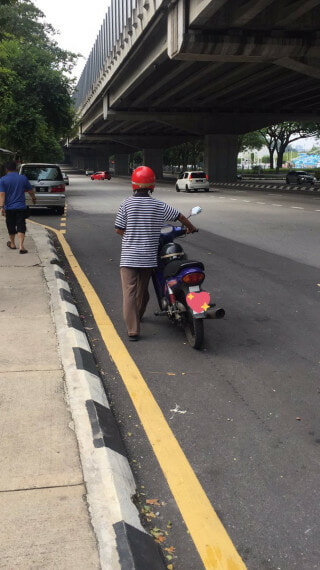 They had only gone a few steps when Karma decided to take action.
“A Chinese uncle approached us. He was rushing out of the apartment building towards his car, which was parked at the same bus stop we were at. He asked my father what had happened, so he told the uncle the entire story. The uncle then offered to go buy petrol for us even though he seemed like he was rushing. My father handed him some money but the uncle said ‘Aiyaa, after I buy the petrol ma.'”
The Chinese uncle told them that he would be back in 10 minutes, and in 10 minutes he did return.
“The uncle came back with a little barrel of petrol. Yeah, of course because we didn’t have a bottle on us. If you were to follow the petrol pricing, a little barrel of petrol for a full tank would be about RM7. My father handed the uncle a RM5 note. The uncle just said, ‘No need to pay me, me helping you today means that someone will help me one day.‘”

As Nebulaaa and her father rode home after the incident, her father bestowed some good ol’ fashioned words of wisdom upon his daughter.

“Maybe the kindness we’ve shown and the help we’ve given to others before this, we are now receiving back. Alhamdulillah. Do good onto others and others will help us when we need it.”

It’s sights like this that remind us that the 1Malaysia spirit is and has always been strong – we just need to see each other as human beings!  It’s really touching to see Malaysians making the extra effort for no other reason than the kindness of their hearts.

Also read: Bangladeshis Tip Grab Driver RM50 After 3 Others Refused to Pick Them Up Because They Were “Smelly” 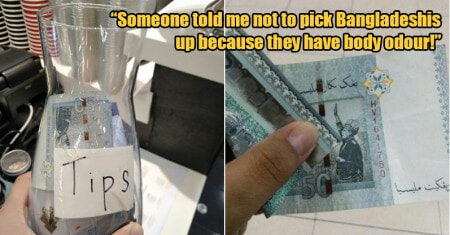