Always do proper background research when accepting an offer from someone, let alone a stranger! Better be safe than sorry.

As reported by Sinar Harian, a shocking case happened in Pontian, Johor when a 23-year-old woman was sexually assaulted, robbed, extorted and left in a palm oil plantation by someone she knew through Facebook after accepting a job offer to do a model photoshoot from him. Worse, the perpetrator even recorded molesting her and threatened to release the video if she reports him to the police!

Feeling safe because she was accompanied by her boyfriend to the proposed photoshoot, the victim drove all the way from Kuala Lumpur and arrived in Johor at around 12.30 pm on 23rd December 2019 (Monday). She was offered by the perpetrator on Facebook to be a model with a commission of RM3,000.

When in Pontian, the victim and her boyfriend picked up the perpetrator and were on their way to the proposed photoshoot location in Lima Kedai, Gelang Patah. When they arrived there, the perpetrator, who was sitting in the backseat, suddenly brought out a parang and placed it on the boyfriend’s neck.

The boyfriend was then forcefully locked inside the bonnet of the car before the perpetrator went back inside the car. He then sexually assaulted the victim while recording using his mobile phone. What a despicable human being!

After molesting the victim, he then brought the couple to a palm oil plantation in Pontian, left them there and drove away with their car, personal belongings, smartphones, wallets and more.

The Chief Police of Iskandar Puteri, Assitant Commissioner Dzulkhairi Mukhtar in a press statement said that,

“According to the victim’s testimony, the suspect threatened to viral the sexual assault video if she made a police report”

He further iterates that the case is being investigated under Section 392, 397, 377C and 354 of the Penal Code and the police are on high alert searching for the suspect.

Hopefully, they can find the perpetrator and bring him to justice soon! What do you think of the whole incident? Are cases like this more common than we think? Share your thoughts with us in the comments section.

Also read: Beware: Desperate Guy Pretends to Be A Woman to Scam M’sian Girls For Nudes 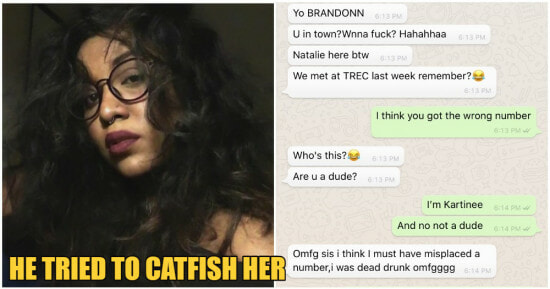