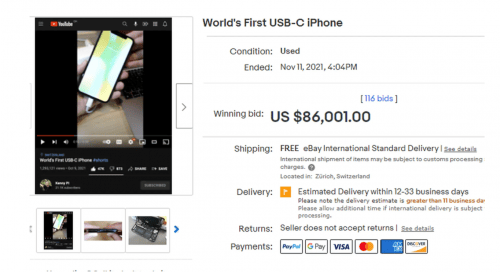 Will the iPhone ever switch from the lightning port to a USB-C port? Apple has already used USB-C for their iPad but decided not to do the same with the iPhone. However, this does not stop Kenn Pillonel, a robotics engineering student to take up the challenge and modify an iPhone X with the USB-C.

What’s more impressive than the whole modification is that the modified phone was sold on eBay for USD 86k (about RM360k)! As quoted by The Verge, Kenn Pillonel explained that a user will be able to use the port for both charging and transferring data. He, however, warns the new owner not to use the phone as their main device or even update the OS because the phone might break.

The phone was listed for auction on eBay with a starting price of just USD 1. By the end of its first day, the bidding was already over USD 3,000 before skyrocketing to tens of thousands. At the end of the bid, a total of 116 bids were made.

Since the prototype has now been sold, Pillonel will now focus on improving the USB-C iPhones’ fast-charging, waterproofing, and adding support for USB-C accessories. He also made the design open-sourced, and with the prototype released now, he hopes that it will be a project that everyone can work on.

Hopefully, Apple will decide to include the USB-C port in their future iPhones so we don’t have to carry so many cables with us when we go anywhere.

Also read: YouTube Is Removing ‘Dislike Count’ On All Videos, Users Say It Takes Away Freedom Of Speech