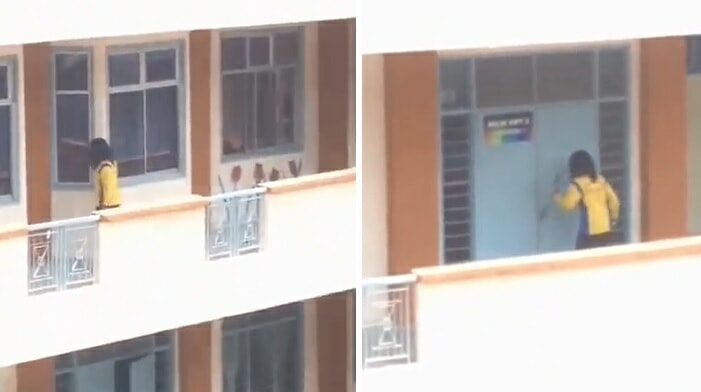 What are Malaysian schools famous for? Being haunted of course.

A terrifying video was shared to us that captures just that.

The video was shot by a student in the opposite block showing a girl from SMK Cheras who was allegedly possessed.

As cliche as it sounds, she was seen with her face covered by her black hair roaming in the school’s corridor. The beginning of the video shows her holding onto a pair of scissors and snipping it aggressively.

She thumps on the windows and then kicks one of the classroom doors to force entry.

Imagine how mortified the students inside must be!

After struggling with the handle, the door breaks open. THANK GOD they had a gate that stopped her from entering.

She proceeded to throw her scissors before picking it up again and breaking the classroom windows with what seemed like her bare hands.

It was said that two male teachers restrained her down and authorities were called.

This is why you should allow handphone in schools.