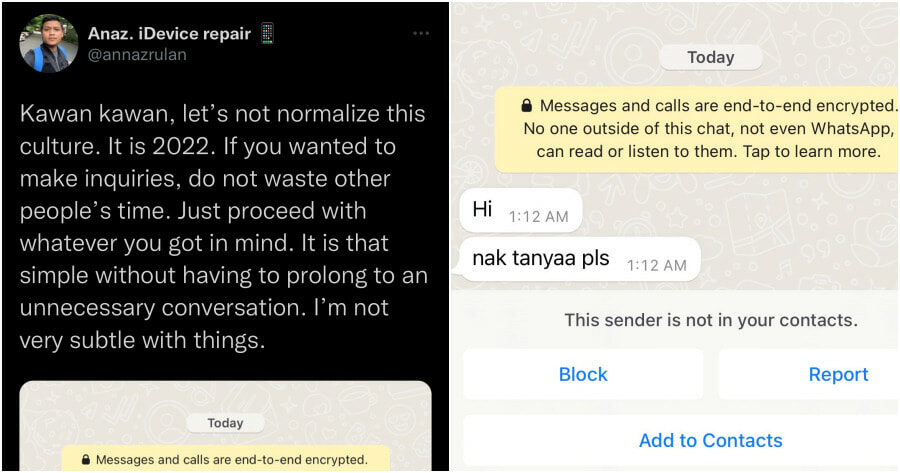 When you get a message, one of the most frustrating things is when you it’s from a stranger who does not introduce themselves and does not specifically say what exactly they want from you.

This can be even more frustrating when you’re a business owner as you would have to respond to them back just to ask them what exactly they are looking for you for.

Recently, a Malaysian business owner who repairs smartphones took to Twitter to share his frustration over the issue. 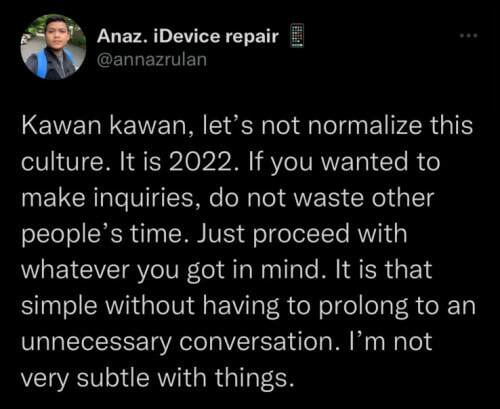 In the tweet by Anaz, he wrote, “Friends, let’s not normalise this culture. It is 2022. If you wanted to make inquiries, do not waste other people’s time.”

“Just proceed with whatever you got in mind. It is that simple without having to prolong to an unnecessary conversation. I’m not very subtle with things.”

Along with his post, Anaz shared a message he received from a potential customer who messaged him without any proper introduction and without stating what service they wanted from him. 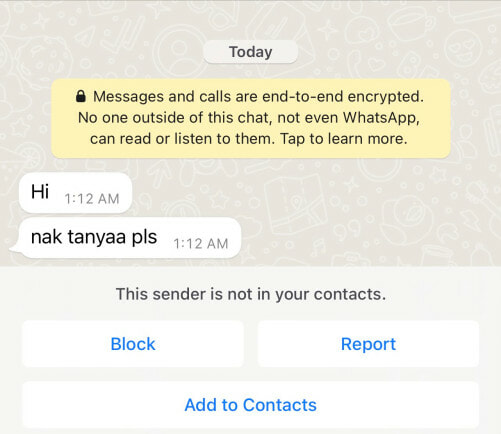 In a follow up tweet, Anaz said that although he has no qualms over the short greetings, he just wishes that customers would be more straight forward and direct with their messages.

“Actually the OP is just a reminder in ‘general’. I really have no qualm over short greetings as such. For instance I still proceed to respond. So, more reasons for you guys to be using my service“, he added. 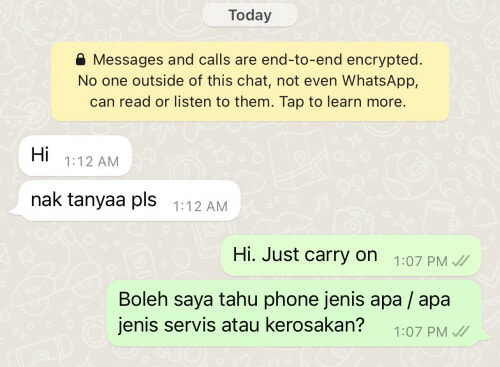 Malaysians were divided on the matter

Anaz’s tweet has gone viral and currently sits on over 15,300 likes and 17,800 shares at the time of writing. A couple of users slammed Anaz for complaining about what appears to be a small issue.

“Bro, in Malay we call it adab (being respectful). Maybe they thought you were busy“, commented a user.

Another said that, “(People) have their own way to create a conversation, and won’t let the message get turned down or be rejected“. 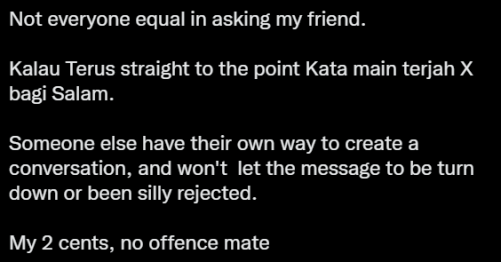 However, on the other hand, netizens, especially business owners, shared the same frustrations as Anaz and said that they would much prefer a direct or swift conversation when it comes to work.

“For me, if you want a message, just tell what you want. No need for an introduction. Sometimes it’s a waste of time.”

Another user commented, “Sometimes it’s not that we don’t want to reply but we’re busy and sometimes we have no time to entertain people. If you just go straight to the point, (then) we don’t have to prolong the conversation“.

“Agreed. For me, I prefer when they ask directly without me having to ask them first. The worst is when they don’t reply but bluetick us instead“, said a netizen.

What are your thoughts on this? Is it a big deal for you? 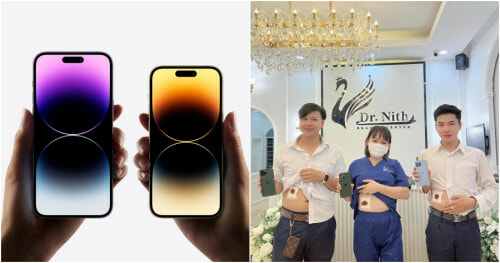