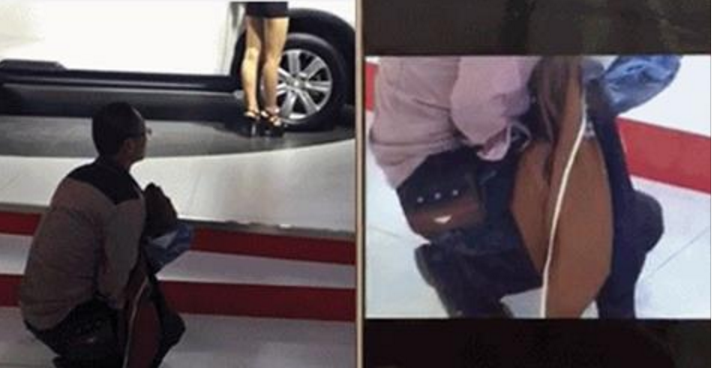 Yep the title said it all.

There’s no denying that if you’re heading to the local auto show in your city, chances are you’ll be pretty excited or at least aware of the amount of car show models present at the show.

Auto shows are famous for multiple things, mainly the cars and the models. And in certain cases there are men who have been known to cross the line, such as obscene camera angles when they take photos of the models or some touchy touchy behaviour while posing with them. However, most have been able to keep it in their pants.

Not this dude though.

A pair of gifs have recently surfaced and went viral on Chinese social media, Weibo, as reported by Shanghaiist.

The gifs show one very shady Chinese man bizarrely squatting on the ground at an auto show.

You might think that the man was tired of standing or maybe he’s just taking a closer look at that nice rim job. Ayyy.

However, a netizen who filmed this showed us otherwise.

Here is a closer look and concrete proof that would convince you that this man is indeed doing his dirty deed.

Netizens who stumbled across the video were disgusted at this man’s obscene act, especially when he’s doing it outright in public!

“Wait.. He got the BALLS to squat at the front row pleasuring himself but no NERVE to ask one of the ladies out?” one wrote.

But who knows? Maybe he’s just really REALLY into cars!