There are people in the world who want to help animals and think that they are, but unfortunately, they are not.

Most of the time, these are people with good intentions but lack a sense of realism.

As showcased by the Malaysia Animal Association, a number of cats were found dead after a man, who is believed to be mentally unstable, had hoarded them in an empty building unit in Tanah Merah, Kelantan.

They wrote, “At least a dozen locked up cats starved to death in an empty premises in Taman Humaira, Tanah Merah, Kelantan. The cats that died of starvation can been seen decaying in the empty, upstairs premises and are suspected of enduring dehydration based on the dry, decaying corpses that turned into dust. According to the witness, the perpetrator who often picks up cats and brings them to the empty premises without the knowledge of the public is a man with mental problems.”

The authorities came to know of the situation after a business owner downstairs had heard the whining sounds of cats and spoke to the witness.

The Malaysia Animal Association urges the general public to stop the man from taking anymore cats, if he is seen doing so, in order to prevent this situation from happening again.

It is understandable to want to take a stray home, but the necessary care should be taken to ensure that they are fed, happy and healthy. Stray cats may have it hard on the streets but with the freedom also comes their ability to survive.

We genuinely hope that the man gets the help that he needs.

Also read: Bomba Saves Kitten Stuck In Engine, Here’s How You Can Check If There’s A Cat Sleeping Under Your Hood 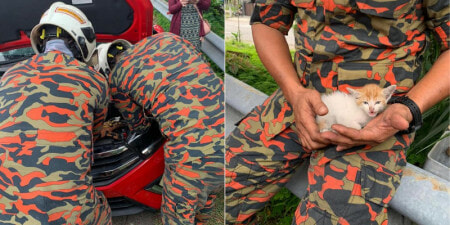