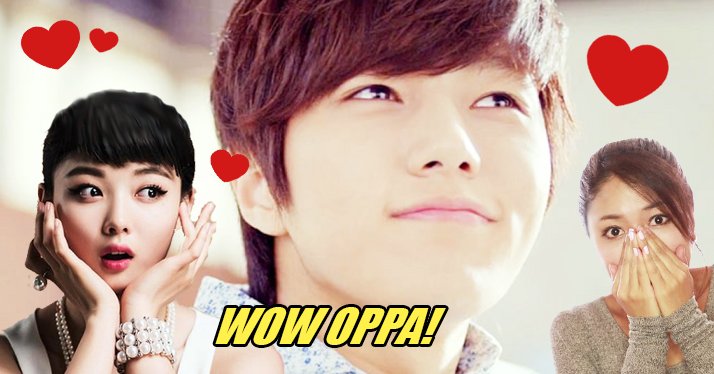 Korean dramas are typically filled with cliche scenes and unrealistic situations. However, as much as we say ‘I hate this show’, our eyes are still glued to the screen anyways.

The shows definitely have a certain charm to them, and more than half of the time, we find ourselves melting over the Oppas on screen, secretly wishing our Malaysian boys could do the same thing!

Check out these things that got most of us flailing over and wishing that it could actually happen.

1. Give us a piggyback ride

We often see the Oppas giving the ladies a piggyback ride in various occasions. Either she is drunk, she hurt herself, or she’s tired. Sometimes, she even makes up some lame excuse when she’s completely fine, just to be on Oppa’s back.

2. Grab our wrist to stop us from storming off during an argument

In the middle of a fight, sometimes we get so angry that we just want to get away from the heated situation. Of course, running away from the problem won’t solve it which is why girls really wish our Malaysian boys could grab our wrist before we storm off just like how Oppa would. Plus, it shows that he cares ma <3

3. Tie our shoe laces for us

Seeing a man go on his knee for whatever reason will definitely make a girl melt – what more if he actually did that just to help us tie our shoe laces. However, most of the time, Malaysian men wouldn’t purposely volunteer themselves in this situation. Because ego mah!

But trust us, any girl will give you infinite brownie points for doing it!

4. Hug us from the back when we least expect it

What makes relationships exciting are random surprises. We don’t need fancy dinners or expensive dresses, backhug is enough to make our heart melt. Though in reality some of us will probably freak out because, let’s face it, Malaysia isn’t exactly the safest country.

5. They JUST KNOW how to get you to stop being mad at them

It’s a well known fact that girls are hard to please. No means yes, yes means no, maybe means no and the list just practically goes on! But for some reason, Oppa always seem to know what the girl is thinking about and is able turn any frown upside down.

Even if it means letting you hurt them…

6. Appear out of no where with an umbrella to save you from the rain

The knight-in-shining level for K-dramas are too dang high! Just when you think you’re stuck in the rain…

7. Kiss us when we look into their eyes

Most girls are still very shy when it comes to initiating intimate physical contact with guys. We don’t always dare say things like ‘kiss me’ out loud so we resort to looking into the man’s eyes in hopes that he gets it. Unfortunately, Malaysian men don’t understand this signal.

8. Being a badass to everyone else, but only letting his guard down when he’s with you

He is probably the biggest badass in the whole school. Everyone thinks that’s he’s a cold person but when it comes to you, even a simple slap on the back is ‘painful’ when it didn’t actually hurt him!

These Oppas are not afraid to show their real side, the cute and sweeter side, around you. It’s moment like these that you can’t help but feel like the most special girl in the world <3

9. Put his jacket around us when we’re cold even if we didn’t ask for it

Yet another unexpected gesture that will totally sweep any girl off her feet. Unfortunately more than 50% of the time, Malaysian guys are too oblivious to offer their jacket to the lady. I’d know, I’ve been there!

10. Seemingly being the most perfect guy ever

Every Oppa in every Korean drama seems to be the perfect man which every girl has ever dreamt of.

He is either rich, handsome, tall, gentlemanly, or funny… or just the whole package!

It’s like the heavens decided to bless us with sweet dreams every once in a while.

11. Most importantly, being a total heart throb but he only has his eyes on you

Let’s face it, in this time and day, it’s hard to find a true and faithful love.

And unfortunately, we can only get men like that in Korean dramas because these are very unrealistic actions which not even the Korean actors themselves would do.

So, all we can do to fulfill our fantasies is to catch these handsome Oppas on our screens! Watch your favourite Oppa (or even get new ones) through the various channels dedicated to all things Korean on Astro!

All these shows are showing at the SAME day or even same time as Korea. So that means you’re watching the show as other Koreans are watching it for the first time too! Cooler than most people out there! 😉

Don’t worry if some of these show times are overlapping because you can always watch them on Astro GO and On Demand.

So, you can actually watch it any time and anywhere you like!

Ready to treat yourself to charming Oppas all day? I know I am!

You can check out Astro’s website and Chingu for more info too. Get yourself the Oppa you deserve.