A total of 11 green turtles were found to have been butchered and the flesh of these turtles are believed to be used as food following the discovery of the carcass of the unfortunate animal in the waters of Pantau-Pantau, Pulau Bum-Bum, Semporna, Sabah.

The carcass of the turtle, which had begun to rot, was found at 6am today by security forces conducting Khazanah Integrated Operation.

Sabah General Operations Force (PGA) Brigade Commander Abdul Rani Alias, as reported by Metro, said they found rubbish in the waters together with members of the Sabah Wildlife Department and Sabah Forestry Department who were involved in the same operation. He elaborated,

“Besides that, we found two sacks containing cooked turtle flesh, turtle carcasses and cooking utensils. However, the inspection around the location did not find the suspect who carried out the activity.”

Abdul Rani said all the findings, including cooking utensils, estimated at RM8,200, were taken to the Semporna District Police Headquarters (IPD) for further action.

Also read: Female Turtle Found Dead In Terengganu, Allegedly Drowned When It Was Trapped In A Net 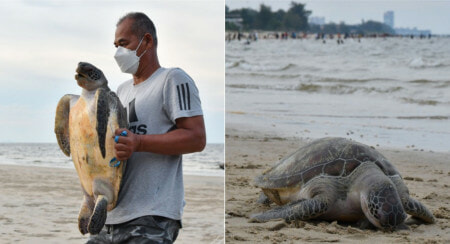