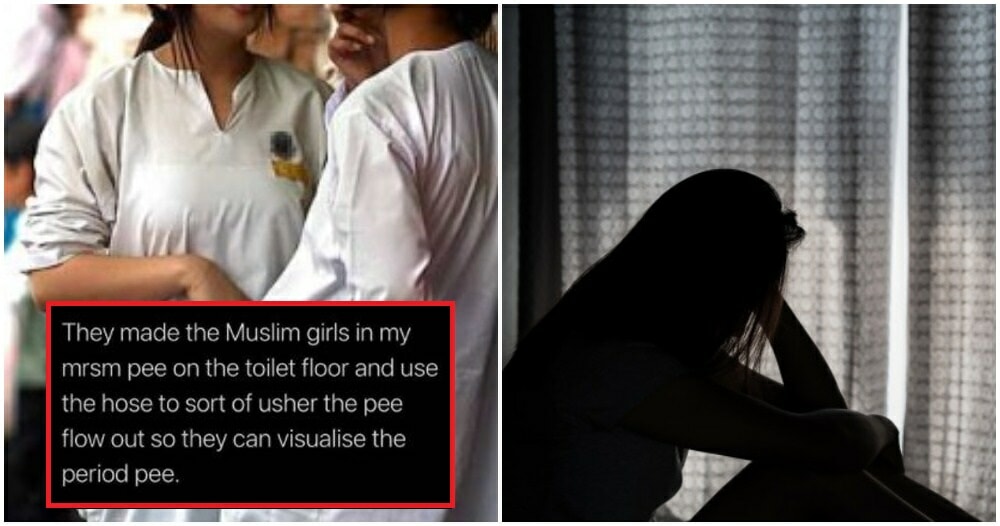 TW: This article discusses matters that can be disturbing to some readers. Reader discretion is advised.

The fact that this heinous act is still happening to our students without any action being taken against the perpetrators is disgusting!

With Malaysians celebrating the month of Ramadhan, the month has brought forward a disgusting practice many female Muslim students are still going through in order to “prove” that they don’t need to fast. It all started when a Twitter user asked the Minister of Religious Affairs, Datuk Dr Zulkifli Mohamad al-Bakri his opinion on certain schools that force their female Muslim students to smear their private parts and show the blood to their school prefect or teacher as proof that they won’t be able to pray or fast.

She shared that she was also a victim of this practice as during her university orientation week, she was given a tissue to wipe the blood as “proof”. Left with no choice, she used the tissue to wrap her used pad and handed it to them. 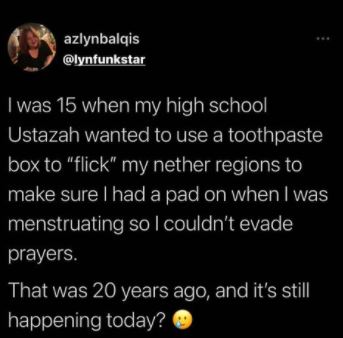 Another girl revealed that the Ustazahs (female Muslim religious teachers) would touch the bottom of the female students’ buttocks to check if whether they were wearing pads.

“I despised this from the bottom of my heart and have decided never to send my children to those schools.”

In one school, they made the Muslim girls pee on the toilet floor and use the hose to “usher” the pee to visualise the period urine. One student was in a boarding school where the Ustazah would make the girls on their periods’ line up and make them take off their underwear in front of her to prove it. 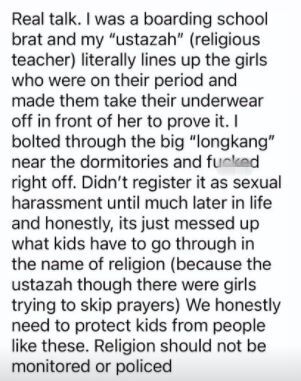 “I didn’t register it as sexual harassment until much later in life and honestly it’s just messed up what kids have to go through in the name of religion. We honestly need to protect kids from people like these.”

It’s heartbreaking that not only girls were the victims of these practices.  A male student told Nalisa that he was aware his female friends went through this as the “spot checks” were conducted in the school main hall in plain view of everyone. 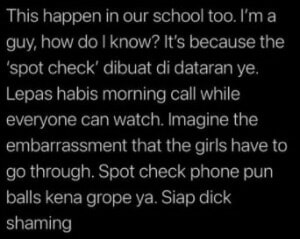 “They would grope our balls in the name of phone spot checks. We would even get penis shamed.” 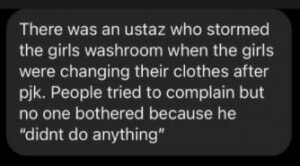 Parents complained about this Ustaz (male Muslim religious teacher) to the Ministry of Education but no actions were taken. In fact, the Ustaz is still in the school and has even been promoted to the Head of Discipline role. A female student said while she was in her primary school, she didn’t have much knowledge about periods and she was shamed in front of her entire class by a teacher when her period came unexpectedly one day. 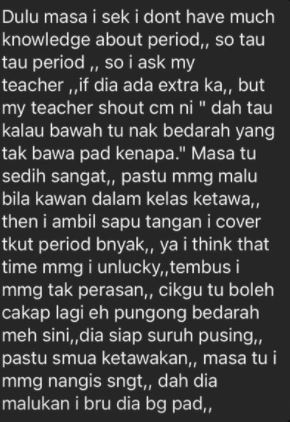 When she confided to her teacher, instead of comforting and helping her, the teacher instead yelled at her in front of the whole class, “If you know you’re bleeding down there, why didn’t you bring your pad!”. She was so embarrassed as her classmates were laughing at her. Out of desperation, she used her handkerchief as a makeshift pad but unfortunately, she started bleeding again and it showed on her uniform. The teacher again decided to embarrass her and said “Eh, your butt is bleeding, show everyone.” Only when she started to cry inconsolably did the teacher give her a pad.

Another netizen shares that a female student who didn’t pray one day decided to join her friends waiting at the side of the prayer area. A male teacher was suddenly in the area and asked why they didn’t join their friends praying. He then asked them while pointing his rattan, “Are you really having your period? Want me to check you one by one?”.

“It was so gross that a teacher would say that to his students. The teacher wasn’t even fired, he just got transferred to another school.”

One girl told the heartbreaking story of her friend who started menstruating at a relatively early age of 11. During primary school, the girls used to wear a bralette and her friend would get teased by both male and female teachers when her nipples would show over her baju kurung. Her friend didn’t come to school for weeks after that traumatising incident.

When she came back, she wore an extra T-shirt underneath and a long headscarf. Her friend also refused to participate in sports even though she was actually quite an athletic student.

“She became a shell of her former self and transformed into this hovering loner.”

WORLD OF BUZZ has reached out to the Ministry of Education for a statement on the sexual abuse that so many female students have encountered over the past years. Some of the younger generations are still going through it. If you or anyone you know have experienced similar situations like these and would like to share them, please don’t hesitate to reach out to us. Your identity will be protected for your safety.

Something MUST be done about this, enough is enough! How much more will our students suffer in silence just because some teachers choose to abuse their power. We should all take a stand to make sure our future daughters and sons never have to suffer in silence again! 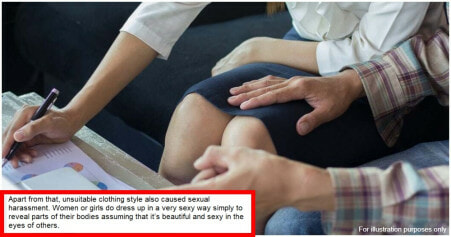