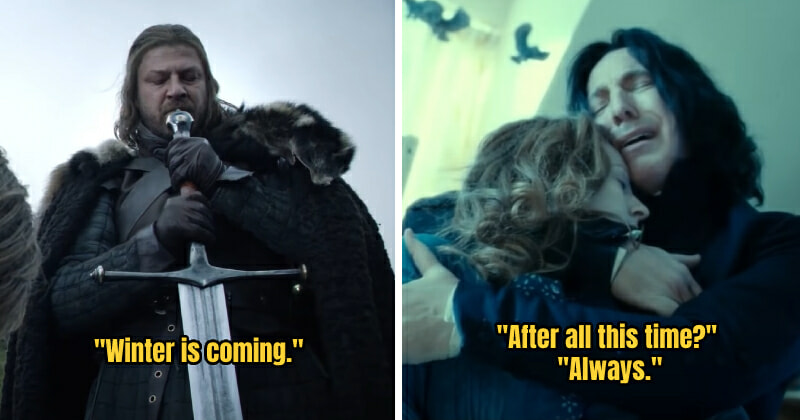 Not everyone has watched all films and TV series that are considered classics. But for each of these stories, there’s a big chance that even non-viewers know at least one scene so phenomenal that they are often referenced outside of these stories.

Pretty much everyone knows about the Joker’s interrogation at the hands of Batman in The Dark Knight or the harrowing “You’ll float too” opening scene from IT. But in our humble geek opinion, here are some of the most iconic scenes ever made in movie and TV history!

But of course, before we proceed, major spoilers abound!: 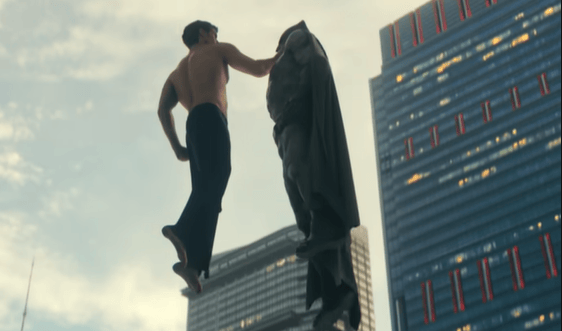 The pretext for this scene in Justice League was quite surprising especially for DC Extended Universe (DCEU) fans, as the Justice League tries to resurrect Superman after his death in the previous movie, Dawn of Justice: Batman v. Superman. The plan seemed to backfire on them at first as Superman proceeded to violently incapacitate the Justice League after his rude awakening.

Saving Batman for last at the receiving end of his curb stomp, the Man of Steel proceeds to lift him by the head and taunt him with the same first words Batman said to him during their first encounter: “Do you bleed?” Just goes to show that not even the entire Justice League could hold a candle to DCEU’s mightiest superhero! 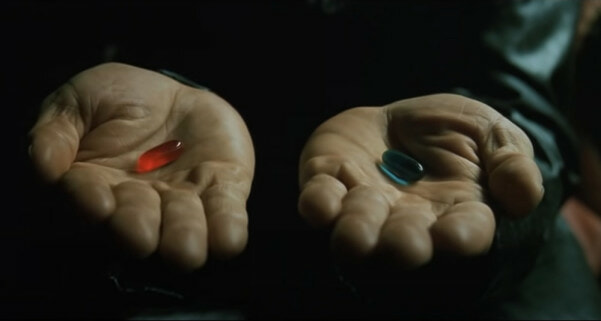 In this quintessential cyberpunk film, the most memorable scene is definitely when Thomas Anderson aka Neo first meets Morpheus, the enigmatic leader of a resistance movement trying to free mankind from the restraint of the Matrix. Here, Morpheus offers Neo one of two pills to consume: the blue pill to make him forget about his encounter with the resistance group and continue his normal life or the red pill to reveal the truth about the Matrix that has confined him his entire life.

After swallowing the red pill, Neo is roped into an adventure where he must end the war between humans and machines after learning that mankind is trapped in a computer simulation to keep humanity passive under the control of sentient machines.

3. Snape reveals his memories through the Pensieve (Harry Potter)

This shocking scene is from Harry Potter and the Deathly Hallows – Part 2, the final film in the award-winning Harry Potter film series conjured by J.K. Rowling’s epic novels. After dying at the fangs of Voldemort’s snake, Nagini, Harry obtains Snape’s memories to be viewed through the magical stone basin, Pensieve.

Here, it is revealed to Harry that Snape’s supposed betrayal towards the main cast was part of a years-long plan outlined between him and Professor Dumbledore to help him work as a double agent amongst the Death Eaters. This shows that all of his actions leading up to him murdering Dumbledore were actually to protect Harry from Voldemort after the death of his parents.

The late Alan Rickman’s portrayal of Severus Snape in this film will “always” be immortalised among die-hard Potterheads! 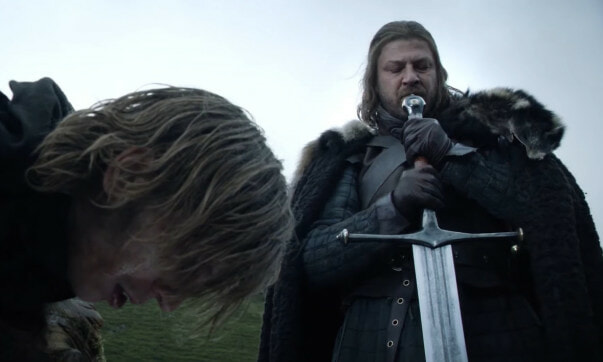 The phrase “winter is coming” is repeated numerous times throughout the fantasy drama, Game of Thrones and subsequently referenced in popular culture to the point of it becoming an internet meme! To understand the significance of this phrase, we need to trace it back to the very first episode of the Game of Thrones series (which ironically enough is also titled “Winter is Coming”).

One of the first uses of this famous phrase is during Ned and Benjen’s conversation about a Night Watch deserter who told them of a White Walker sighting. The White Walkers are a supernatural ancient race of undead humans who were last seen during a very bad winter many years ago. Therefore, Ned likely said “winter is coming” as a foreshadowing of the existential threat the White Walkers would pose towards mankind much later in the series!

And speaking of Game of Thrones…

5. King Viserys passes on the throne to Rhaenyra (House of the Dragon)

While this entry is very new compared to the others in this list, this scene from the Game of Thrones prequel, House of the Dragon is just as iconic on account of it foreshadowing the calamity that will afflict the Seven Kingdoms! After suffering the loss of his wife and his newborn son in the first episode, King Viserys called upon his daughter Rhaenyra to reveal the prophetic dream experienced by Aegon the Conqueror.

Aegon called this dream “The Song of Ice and Fire” (just like the book!) which tells of a terrible Great Winter that will signify the end of the world itself. Upon revealing this prophecy to his daughter, the King announced that he will entrust the Iron Throne to Rhaenyra so that all of Westeros will be able to withstand The Long Night as seen in Game of Thrones!

Speaking of House of the Dragon, are you as hooked on this epic prequel series as we are? Wanna immerse yourself in an epic hunting adventure akin to those conjured by George R. R. Martin’s fantasy world? Then we have just the quest for you!

Every Friday to Sunday from 9 to 25 September, Astro will be holding a House of the Dragon Hunt where you can take part in an epic search for dragon eggs! 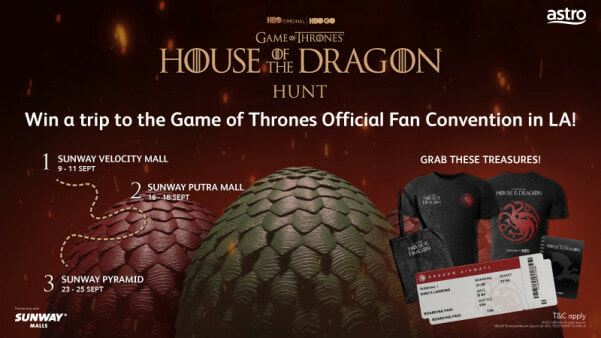 Dive into the world of House of the Dragon through this epic hunt filled with dragon eggs, riddles and even a replica of the famous Game of Thrones dragon, Viserion, courtesy of Astro! By joining, you stand a chance to be one of the lucky few adventurers to win big and exclusive prizes!

“Such awesome prizes! But how do I join?”

Participants will need to fulfil the following requirements and steps to join this Hunt!:

1. Check in at one (1) of the following locations below: 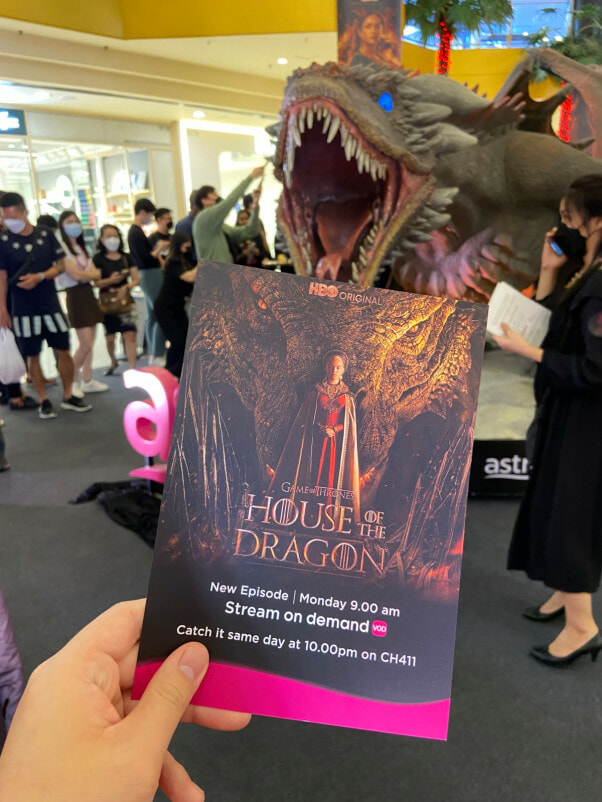 2. Answer questions at the location and count the dragon eggs.

3. Take photos with the dragon eggs and the Game Of Thrones dragon, Viserion.


For more info about #HOTDHuntAstro, visit this link.

This contest is open to new and existing Astro Movie Bundles customers only! Not on Movies Pack? Then get the latest offer at only RM59.99/mth for 6 months.*