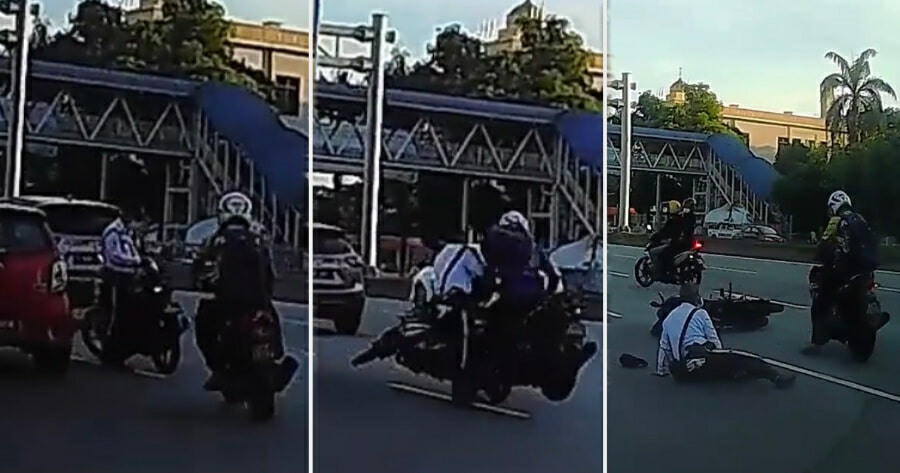 A dashcam footage of an accident in KESAS highway has recently gone viral as the video showed the most unfortunate of incidents; a motorcyclist manoeuvring through traffic and inadvertently crashing into a traffic police officer of all people! Thankfully, both individuals didn’t suffer any injuries or damages to their vehicles.

Shared by a netizen on a Facebook public group called ‘DashCam Owners Malaysia’, Syah Mizie posted the video which has since gone viral with over 2,300 likes and 1,300 shares. You can watch the video here:

In the video, you can see the motorcyclist riding a Yamaha Y15 manoeuvring through slow traffic at a merger in KESAS highway and was looking to his right to spot any incoming vehicles in order to merge into the highway. However, by doing so, the rider didn’t see the ‘abang polis’ that was standing at the merger with his motorcycle to man the traffic and inadvertently crashed into the officer.

While the rider could definitely be charged for reckless driving and not paying attention to the road thus crashing into the police officer, the police officer seen in the video have since decided to not file any report against the rider.

As reported by Sinar Harian, the Subang Jaya Police Chief, Assistant Commissioner Abd Khalid Othman commented on the incident which took place at 7.20am last Thursday (27 October 2021) and said that the police officer seen in the incident sympathised with the motorcyclist for being in that unfortunate situation and won’t be filing any report against the rider. Furthermore, as both individuals did not suffer any injuries or damages to their vehicles, the police officer actually carried on his job manning the traffic at the location after the accident!

Furthermore, Abd Khalid said that the police is grateful and thankful for the concern the public has shown towards the officer in the video. The Subang Jaya police chief further asserted,

“Hopefully this relationship reflects the close relationship between the police and the community, thus creating a safe environment,” 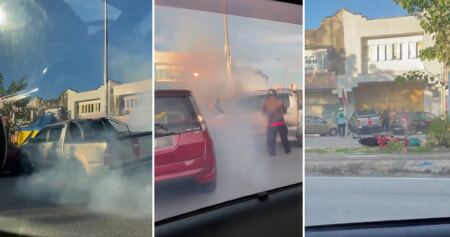