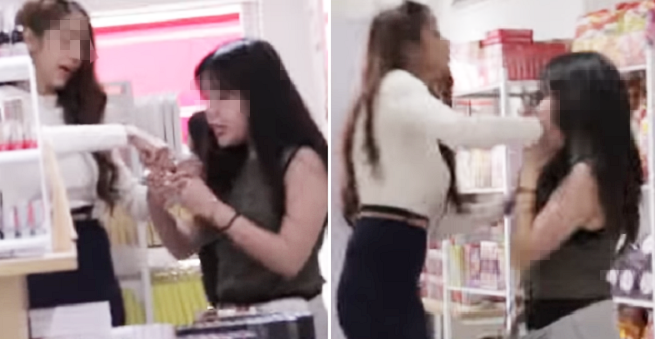 It is common knowledge that most girls (and maybe even some guys!) love their makeup and would go to great lengths to get their hands on their favourite makeup item. But would you resort to a physical scuffle to snag the item that you want?

Recently, video footage of two girls fighting over ONE mascara in a cosmetic store surfaced on the internet. Wow, hardcore makeup addicts!

In a video shared by Ashley Tan, the two girls dressed respectively in white and black are seen to be arguing as one of them points out that she meant to purchase the mascara and had just put it down to look at other items. The other girl disagrees and says that since she put it down then she has the right to take it.

This escalates into a full blown argument where the girl in white demands that the second girl hands the mascara back to her, but the girl in black refuses to do so as it is a limited edition mascara. Serious drama!

She says,“I want this, I always buy, I always use this.”

The first girl says repeatedly, “I do not care whether you want it or not.”

The fight caught a few people’s attention with shoppers in the store checking out the commotion.

At the end of the video, the two girls got into a physical brawl and the video cuts to a stop.

The video has yet to go viral on social media but we believe many netizens will start speculating about the authenticity of the footage. Some people also commented that it may be a marketing gimmick from the cosmetic brand or store itself. But, were you convinced that it was the real deal?

“Do they really need to fight over make up? Girls.” one netizen commented.

“Tak tau lah. But looks kinda staged to me.” wrote one netizen.

In case that was indeed a marketing gimmick, that’s sure one way to be noticed or get attention, right?

Regardless it’s real or not, the scene sure was amusing! Watch the video below: