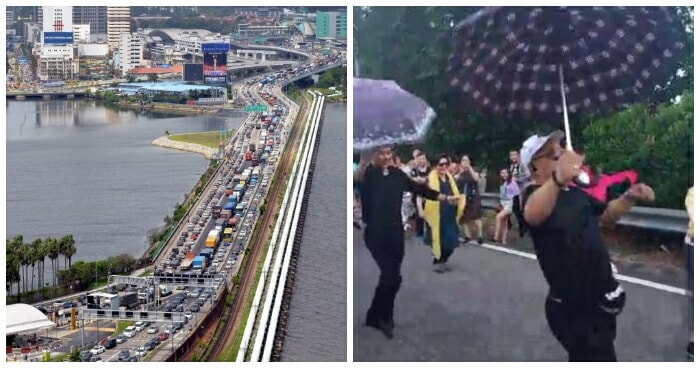 Traffic jams – whether you’re the driver or the passenger, they never get any easier to deal with. Well, what happens when you’re stuck in an eight-hour crawl? For these tourists from Mainland China, they had a pretty creative solution: dance and sing in the streets!

Oriental Daily reported that a bus filled with Chinese tourists were caught in a massive jam yesterday afternoon (March 18) along the Malaysia-Singapore Second Link Bridge, which stretched to a jaw-dropping eight hours. As Singapore is having school holidays this week, the usually congested roads were made worse by droves of Singaporeans heading to Malaysia for a vacation. 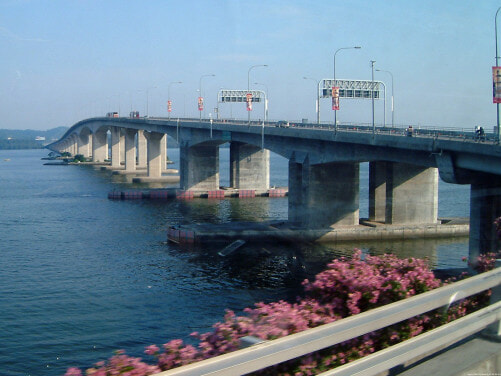 Rather than sit and wait idly in the bus, a group of middle-aged tourists disembarked from the bus, picked up their umbrellas, and started a good ol’ Chinese parade all on their own! Cool way to amuse themselves! In a video captured by a tourist guide, the fun-loving group can be seen merrily marching down the street, dancing and singing – almost as if they aren’t stuck in a slow crawl towards the Peninsular. Where can we get us some of that positive juice?

The tourist guide behind the recording even provided some amusing commentary to the video, asking lightheartedly: “Is this how one promotes the (Malaysia-Singapore Second Link)?” Indeed, the efficiency – or rather, lack thereof – of the link bridge has been a point of contention among frequent travellers for some time now.

In another interview with a separate tourist guide named Thomas, he added that the speed and efficiency of checkpoint staff left much to be desired, as there were only two buses being let through every half an hour. He cited a recent experience of his, during which he was in charge of escorting a Mainland Chinese tourist group from Singapore to Johor Bahru. Although the original estimated time of arrival was noon, the bus ended up being stuck on the bridge for three hours, and was only able to reach Johor at 11pm, before finally arriving at the final destination of Kuala Lumpur at 3 in the morning! We’d be half dead by then, to be honest.

To that end, Prime Minister Tun Dr Mahathir Mohamad has called for at least three to four more bridges connecting Malaysia and Singapore to be built. According to Malay Mail, he pointed out that Penang, despite only needing to connect the island and mainland, already has a third bridge in the works, whereas Singapore, with its far greater traffic flow, only has one causeway and one bridge.

He claimed, however, that Singapore does not want any more bridges for the time being, for reasons that were beyond his understanding.

Dear readers, if you’re a regular commuter along the causeway or the link bridge, tell us: do these struggles speak to you? Let us know in the comments if you have any creative solutions of your own for passing the time!

Also read: Heading to Singapore for the School Holidays? You May Want to Think Again! 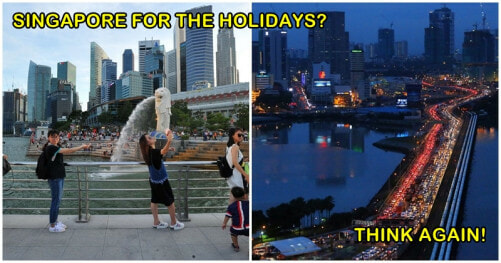