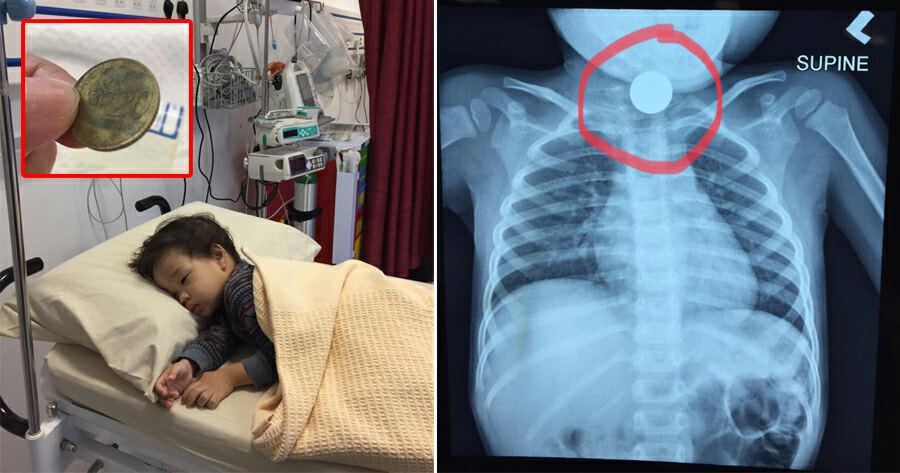 A Malaysian mother shared how she and her husband had to anxiously wait a total of 24 hours at different hospitals before doctors could remove a 20 sen coin that was stuck in their toddler’s throat.

The story was posted on a Facebook page where the mother explains that her child, Reza, had accidentally swallowed an object at about 11pm one night. She realised he was choking on something after he came into the room looking weak and having difficulty breathing.

She tried to hit his back to get him to cough out the object but it didn’t work, so she called her husband, who came and tried the same thing. Reza then started crying before he vomited the milk he had drunk earlier. However, only milk came out while the object was still stuck in his throat.

Spoiled x-ray machine and no equipment 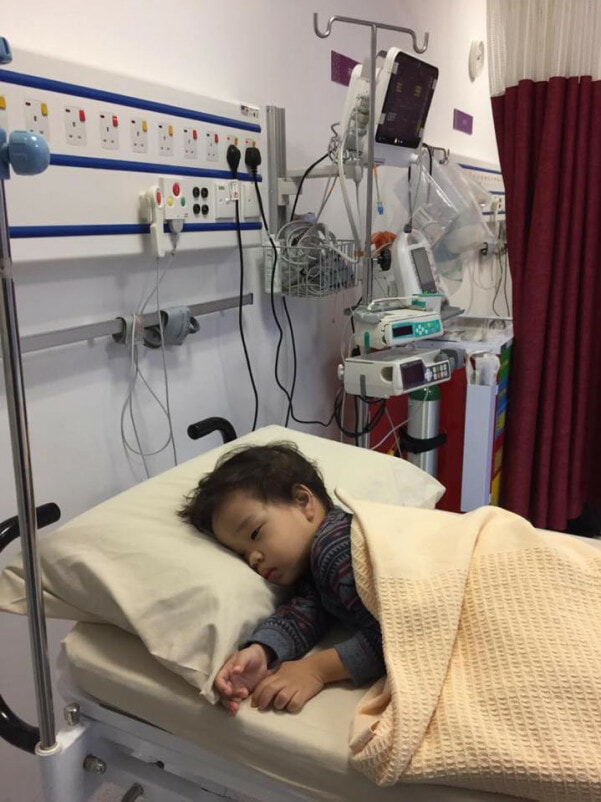 At 11.30pm, they decided to bring Reza to a clinic. On the way there, Reza started vomiting again, and once more when they reached the clinic. However, the doctor said they couldn’t treat Reza as they claimed that their x-ray machine wasn’t working. They were given a reference letter to An-Nur Specialist Hospital in Bangi.

The hospital had an x-ray machine but because the doctor was on call, they had to wait for an hour for the x-ray nurse to come. X-ray results then showed that there was a 20 sen coin stuck between the boy’s respiratory tract and the esophagus! 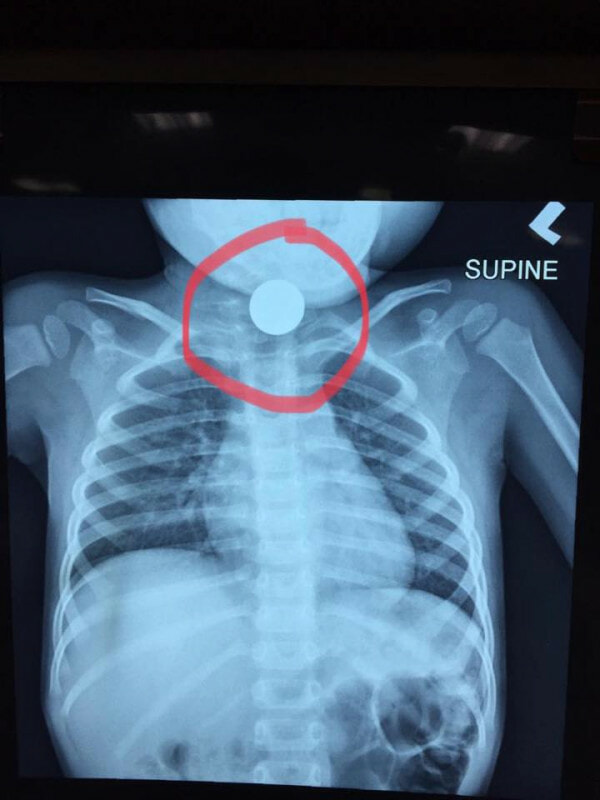 At 1.30am, a doctor arrived and told them that the hospital did not have the proper equipment to remove the coin. Apparently they had ordered the tool but it had not arrived yet. Reza was then referred to KPJ Kajang Specialist Hospital.

No more space in the hospital

After a long journey, they finally arrived at KPJ Kajang and Reza was brought to the emergency ward where medical staff were told that the boy was choking on an object. However, the receptionist did not even look at the x-ray and straight away told them that the hospital was full and told them to go to another hospital.

At this point, Reza’s parents became very frustrated and angry and began scolding the staff. They asked to see the manager and a woman came to them.

“A woman came and explained to me that KPJ does not have a child surgeon,” Reza’s mother said.

“What about the hospital being full? If they had said from the beginning that they didn’t have a child surgeon, we would have understood and went straight to another hospital.”

Eventually, Reza was brought to the critical zone in KPJ where a doctor checked Reza’s heart and oxygen levels. The doctor explained that everything was under control except a little breathing difficulty. This happened at 5am. 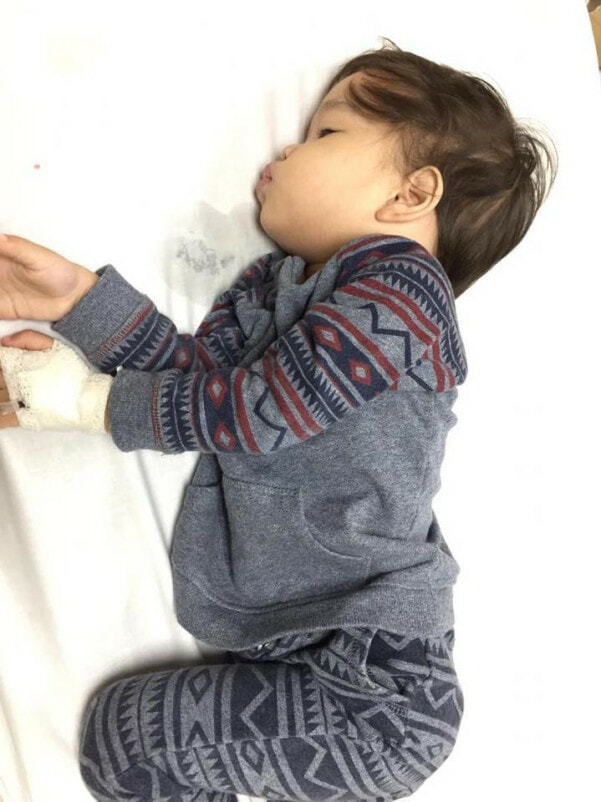 Another x-ray was scheduled at 8am to check if the coin had moved but its position was still the same. They were then referred to Hospital Kuala Lumpur (HKL) as KPJ Kajang did not have enough equipment for the operation.

At 3.30pm, Reza was brought to HKL where a few doctors attended to him and scheduled his operation at 6.30pm. But because Reza drank some water, they had to delay the operation.

Finally, at 10pm, the coin was successfully removed! 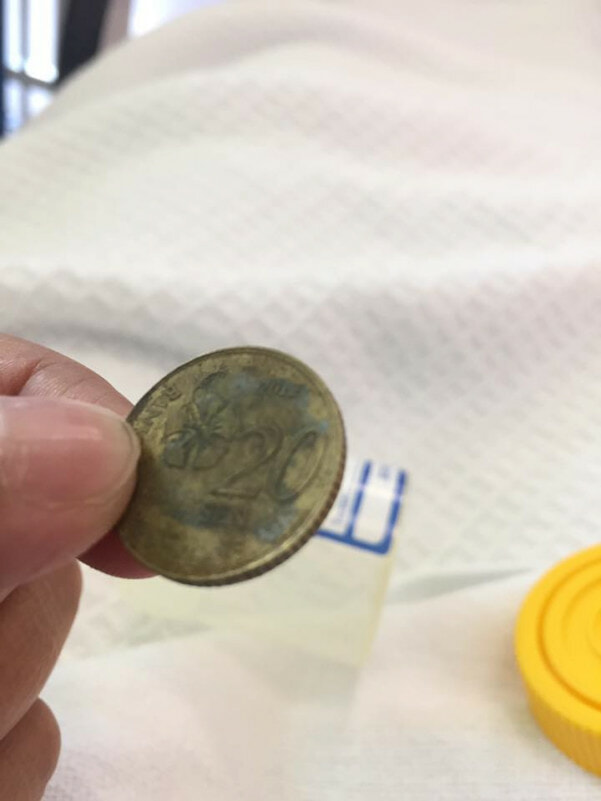 Reza’s mother then advises parents to go straight to big hospitals as she’s afraid what happened to them would happen to others. She then expresses her gratitude to KPJ Kajang and HKL staff for serving them well.

Thank God Reza is okay now! It’s time Malaysian hospitals step up their game and be properly equipped for any emergency. 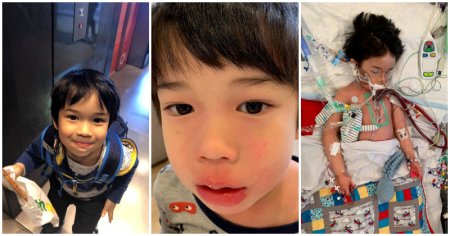