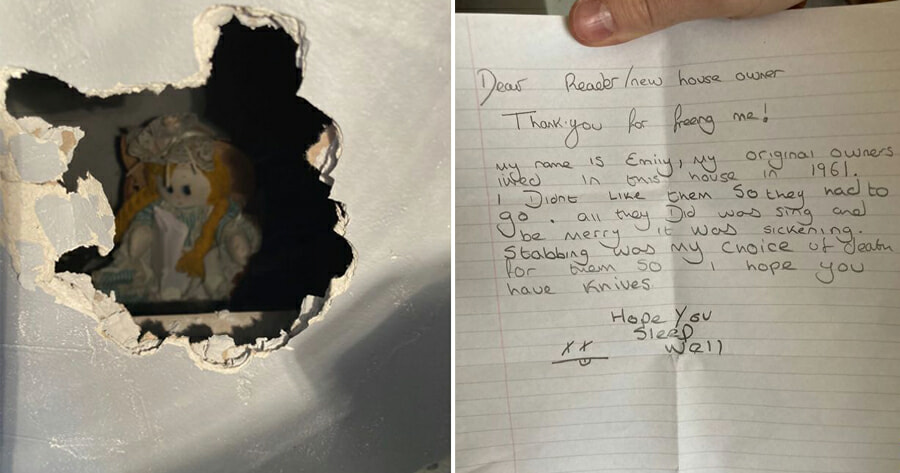 It was a horror movie moment when a man in the UK discovered a doll with a creepy note hiding behind the walls of his new home.

Jonathan Lewis, 32, a primary school teacher from Walton, had just got the keys to his new house when he noticed a wire peeking through the plasterboard. He said he knew there was a space under the stairs and decided to hammer through the wall.

Little did he know, that he would soon discover a pair of eyes staring back at him. 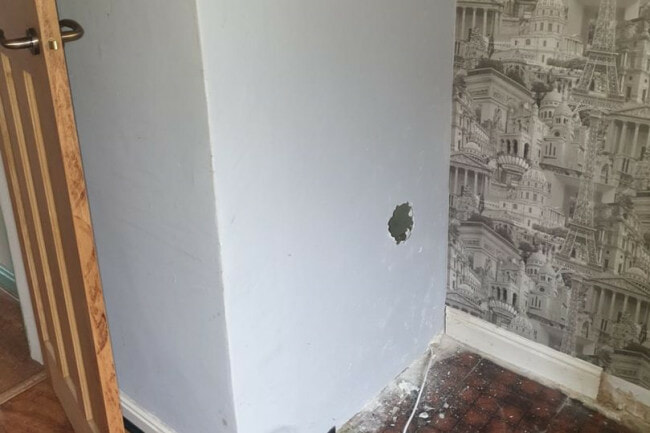 “I’ve just bought the house and I got the keys on Friday. I kind of knew there was this void underneath the stairs that had been plaster-boarded up,” he told ECHO.

“There was a wire coming out where the previous owners had the fridge but I didn’t know where the wire was plugged in so I knocked through a bit of the plasterboard to see what was there.”

“I knocked through a hole about the size of a fist, shone a light in and there was a doll just sitting there.” 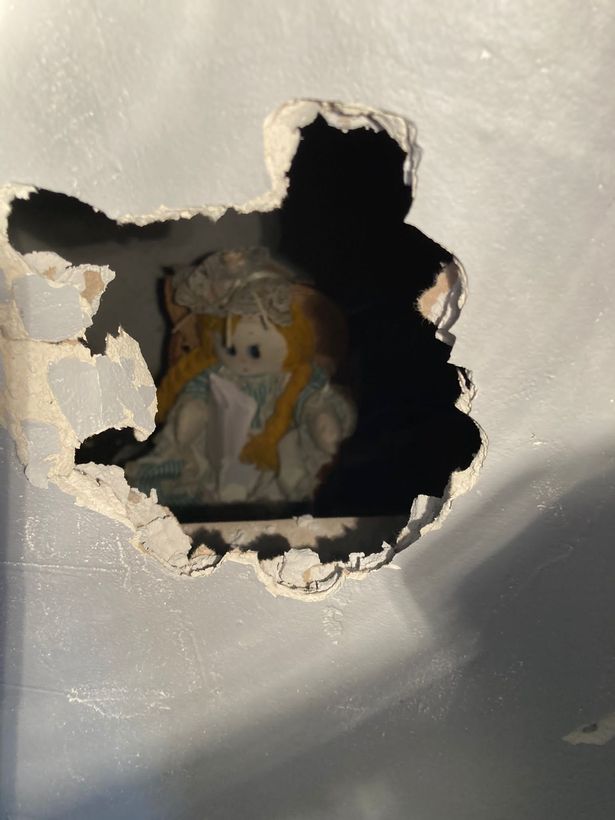 The doll even came with a note which read:

“Dear reader/new homeowner, Thank you for freeing me! My name is Emily. My original owners lived in this house in 1961. I didn’t like them so they had to go. All they did was sing and be merry. It was sickening. Stabbing was my choice of death for them so I hope you have knives. Hope you sleep well.” 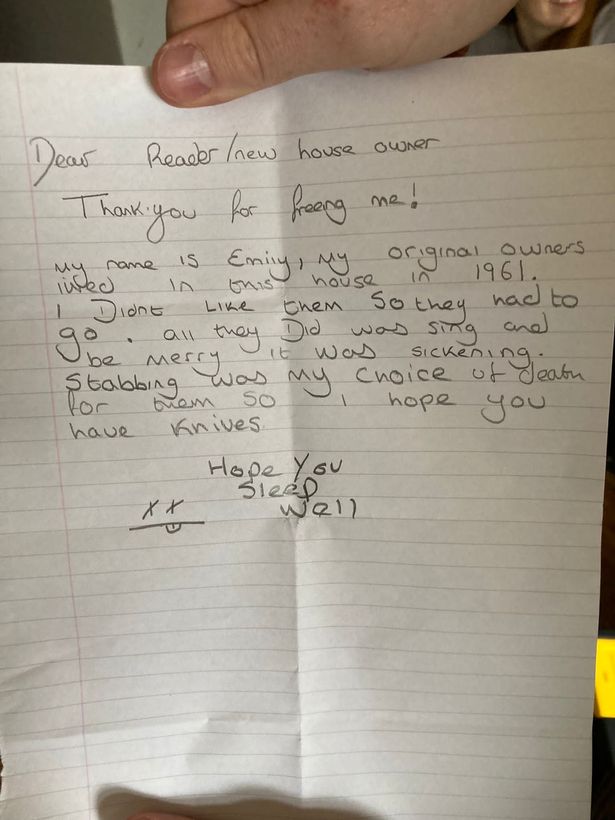 The discovery of the doll and letter crept Jonathan’s friends out, who urged him to get out and sell the house. But Jonathan wasn’t fazed by the spine-chilling letter and suspects that it was just a prank.

“Some of my friends have told me to put my house back on the market and move out but I think it’s just a laugh,” he said.

“I’ll be honest, I found the whole thing hilarious. I’d probably do the exact same thing.”

He said that the letter was dated 1961, but the estate agent told him that the kitchen was only done about four or five years ago.

“I think it must have been put there then because the paper doesn’t look very old and looks relatively recent,” he said. 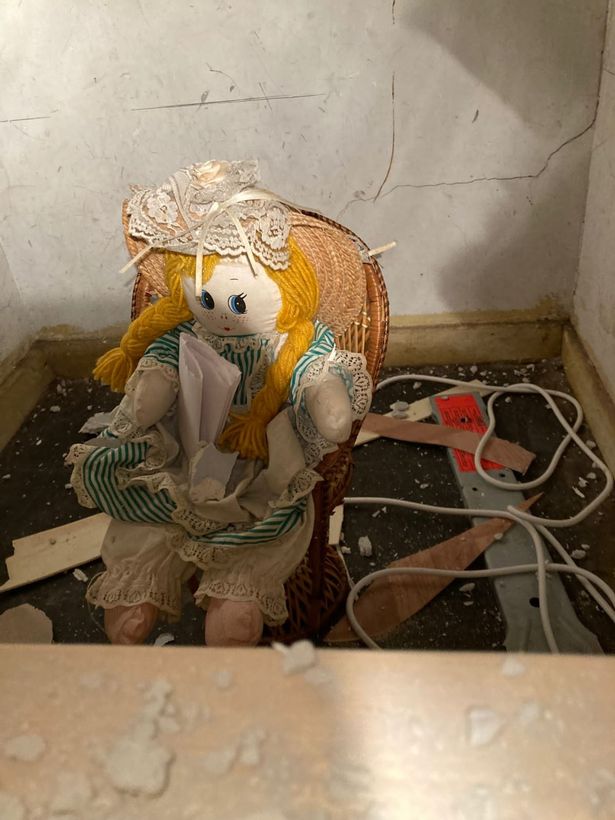 News about Jonathan’s discovery led the former owner of the house to come forward and explain that it was all a prank that she and her family decided to pull.

The 48-year-old woman, who wishes to remain anonymous, said that her family was in the middle of redoing the kitchen in 2015 after having a few glasses of wine when they thought it would be a really funny idea.

“One of my girls wrote the letter and we put it in the wall and just forgot about it,” she said, according to ECHO.

“It was a case we never expected to move on and we forgot it was there until we saw the article. Maybe we watched too many horror films at the time, I can’t remember.”

She reassured Jonathan that it was all a joke and that she didn’t mean anything sinister by it.

She said that the note was dated 1961, but the house wasn’t built until 1964 and the only things that have died in the house were a hamster and some fish.

“We wish Mr Lewis all the best in his new home. We lived there for 25 years and I brought up my kids there, we have nothing but happy memories in there,” she said.

What a relief! What would you have done if you found a doll and a creepy note behind the walls of your house? 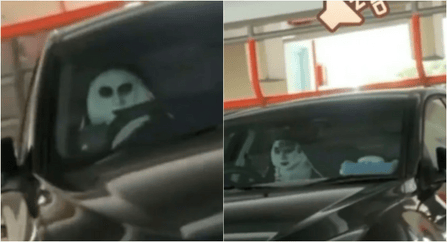