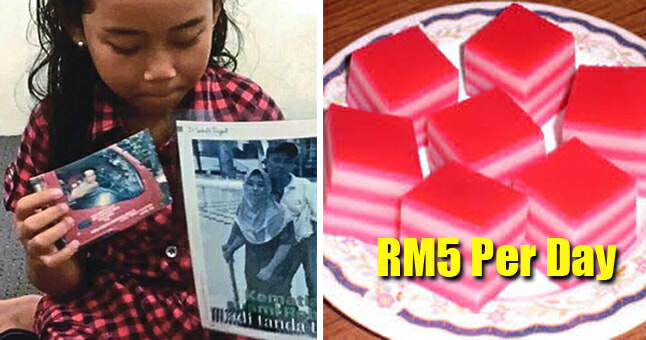 For most children, childhood means waking up at 9am on weekends or holidays to watch their favourite cartoon on television. Not to mention, having our parents serve us breakfast. Ah, that’s the good life. But things aren’t the same for 9-year-old Siti Sirna Mohd Rashid. 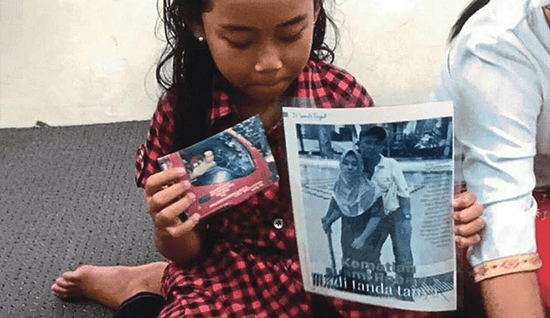 Siti wakes up at 3am to help her neighbour sell kuih. She also helps peel the potato skin and wash all the cooking equipment. It’s a tough job for a small girl if you’d ask me. For all that effort, she gets paid with just RM5 per day and she has been doing this since the start of her school holidays.

“This money (RM5) can lighten the burden of my mother and family,” said Siti.

Her family plunged into poverty when her father, Mohd Rashid Sharudin, the sole breadwinner of the family tragically passed away in 2012. His body was discovered floating in a mine in Puchong.

According to her mother, Rohaya Md. Isa, 46, her husband whom was a taxi driver did not come home for three days. They went looking for him but came home disappointed. The incident happened just a day before the commencement of the Ramadan month that year.

Rohaya said that the whole family was watching the news on television for the fasting announcement.

“However, something else came up on the news when we see the dead body of my husband was carried away by the police,” said Rohana. I can only imagine the magnitude of shock and sadness when they saw the news.

They went to Kuala Lumpur Hospital to identify the body of the deceased. It was the darkest moment of their life. Adding insult to injury, they weren’t able to pay for the autopsy fee which costs RM800. As a result, the autopsy report was kept from them until now. Till this day, they are kept in the dark on the cause of death of their father and husband, according to The Reporter.

Rohana accepted the fate of her husband, and shoulder the burden of the family. She placed all hope on her children, age between 9 to 21 years old. She receives monetary aid from zakat and also Social Welfare Department monthly.

She couldn’t work because she needs to take care of them. She also recounted the times when someone brought one of her children to Subang to beg for money. Fortunately, her neighbour saw and brought the child back to her mother. Thank goodness it didn’t turn into another case of kidnapping.

Being the youngest of the 5 children, Siti Sirna admitted that she misses her late father dearly. She doesn’t mind working hard to help out her mother.

“When my father was still around, he would bring us to jalan-jalan. Now its different, my brother would bring me to Dataran Merdeka when he is on leave,” said Siti.

The family is currently living in Pangsapuri Seri Keyan, Taman Pinggiran USJ according to Harian Metro. If you wish to contribute to the family, you can do so through Pn Rohaya Md Isa’s Maybank account. The number is 102054584535.

Guys, I think it’s time we stop complaining and start counting our blessings as well as being grateful for what we have.