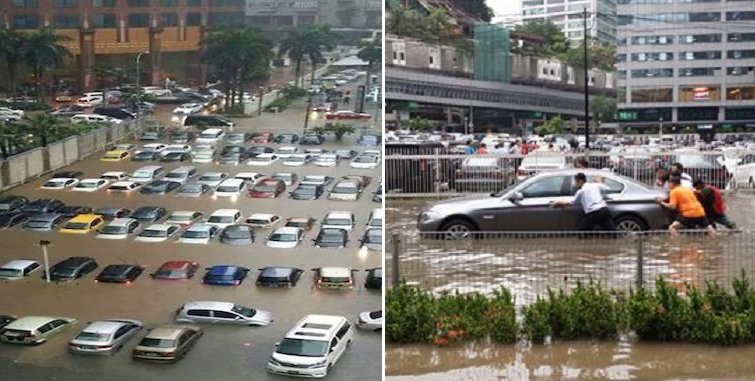 To make matters worse, heavy rain has been pouring about 5pm-7pm which is when traffic is highest, aka peak hour from everyone going home from work.

The downpour has caused havoc around Klang Valley where you can see cars transforming into submarines. Hundreds of cars submerged in an open car park in Kuala Lumpur.

What’s crazy about it was that the flash flood happened only after 30 to 90 minutes of rain, emphasis on the flash.

People from the Klang Valley may want to rethink their decision before driving their car out because chances are, you might end up with the same water diving experience. Or, get stuck in a massive traffic jam that last hours!

If you do drive, I suppose you’ll just have to make sure that location isn’t prone to flood. Orrrr whip your car keys out at the first sound of thunder and drive your car to safety.

Unfortunately, car insurance does not cover flood occurrences so a whole lot of people are probably banging their head against their mud-filled car.

The first disastrous flash flood occurred last week when some Malaysians were caught by surprise, having almost the whole of their car underwater. If I didn’t know any better, i would’ve thought the UM gate was part of a water feature.

No it’s not a typo from el Niño.

Climatologist and Oceanographer Prof Dr Fredolin Tangang from Universiti Kebangsaan Malaysia said, Malaysians would have to brace for a wetter monsoon at the end of this year due to the effects that stem from the La Niña phenomenon, as after the strong El Niño ‘the system will overshoot and move to a La Niña condition’.

So what is La Niña?

In a very layman term, it means a cooling phases after the El Niño effect.

No one is sure how long with this weather in Klang Valley will persist nor if another flood will happen. You’ll only just have to decide whether to risk driving out or not! Or go out as a whole in that matter!

All I know is we’d better pray to the angry rain God so he doesn’t punish our sorry ass again for complaining about Malaysian’s weather.