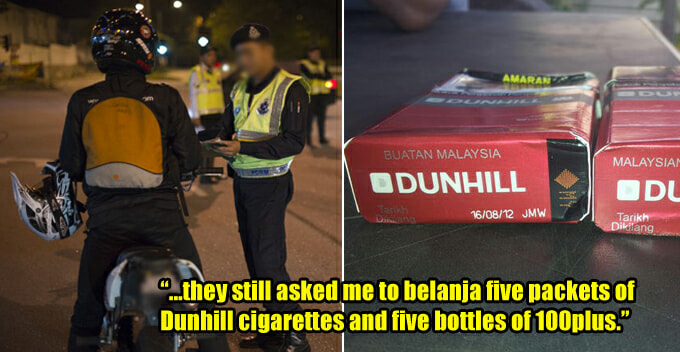 This is the reason why people are having a hard time trusting the police.

A Malaysian named Mohd Hairry Hussain recently shared on Twitter about his encounter with some dirty policemen. Apparently, he was on his way home at night when a group of policemen stopped him and a Bangladeshi man who was riding beside him without wearing a helmet. Both of them were hauled to the side of the road although Hairry didn’t violate any rules. 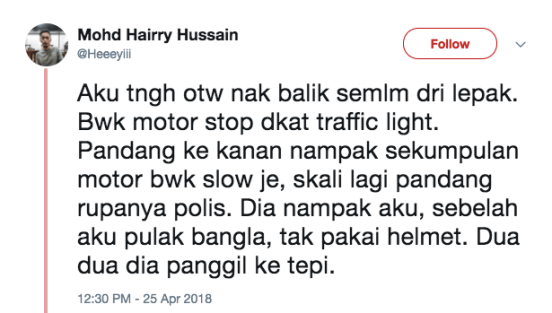 Here’s the translation of what he wrote.

“He (policeman) asked me to take out my IC, license and road tax. He then asked me if I took anything. In other words, he was asking whether I had taken any drugs. I said no, then he asked why my face was sunken, body so thin, and eyes half closed.”

“He then asked me to undergo a urine test. I said can, because I didn’t take anything.”

The dodgy policeman then ransacked Hairry’s bag and wallet. His phone was even taken away from him! He wanted to stop them but he didn’t want the policeman to think bukan-bukan, which could cause a bigger problem for him.

After failing to find any prohibited item, the cop then asked again whether he had taken any drugs, and whether he’s willing to undergo a urine test. Hairry gave the same answer and the cop suddenly asked about where he lives.

“Before they let me go, they asked me whether I wanted to belanja them anything or not. They were really pushing it even though I didn’t do anything wrong and they still had the cheek to ask me to belanja them five packets of Dunhill cigarettes and five bottles of 100plus.” 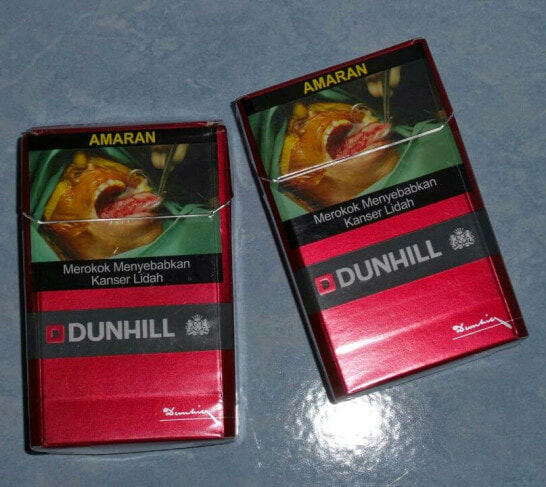 “I said the cigarettes are too much, I can only belanja drinks. As for the Bangladeshi, his road tax had expired for seven years and he doesn’t have a driving license. His people (Bangladeshis) came to help him and they would most probably kena pau even worse.”

After going through this eye-opening experience, he urged everyone to be careful while on the road because these dirty cops are constantly preying for their victims. He wasn’t worried about getting his urine tested because he was clean, but he was worried that the cops might put something in his bag to frame him.

Netizens were enraged after reading the post and urged him to lodge a police report.

“If no action is taken, you should just lodge another report at Bukit Aman police headquarters. Please take down their uniform ID number and their names so that they can easily be identified,” a netizen said.

You can read the original tweets here.

We hope these corrupted cops will be hauled to court and get prosecuted because they are tarnishing our police force’s reputation! 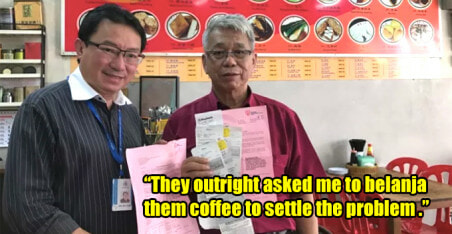