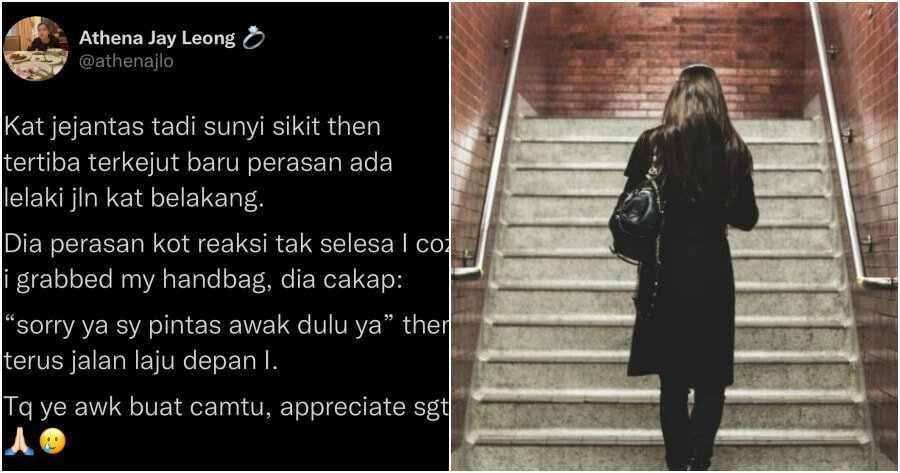 If you are a woman or if you are just someone who has walked alone before, chances are that you have probably felt worried for your safety while walking.

Recently, a Malaysian woman took to Twitter to talk about her experience walking alone along a quiet pedestrian bridge.

“sorry ya sy pintas awak dulu ya” then terus jalan laju depan I.

In the tweet, Athena shares how she was suddenly surprised when she realised that there was a man walking behind her.

Feeling scared, she instinctively pulled her handbag closer to herself, which the man behind her noticed. 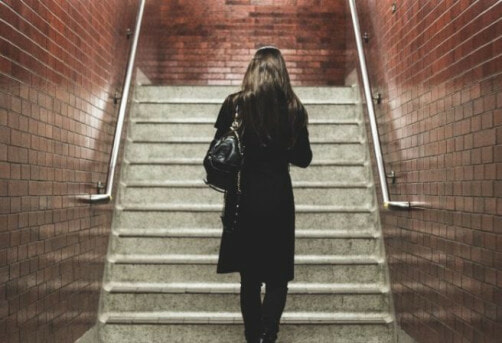 Sensing that she was uncomfortable, the man proceeded to apologise and stated that he will cut her path and walk in front of her (so that she would not have to worry too much about whether he has ill-intent).

Then, she concluded the tweet by thanking the man and saying that she really appreciated the gesture.

While there were many netizens praising the man for being considerate and saying that that is the least men can do to protect women, there were also many who thought that Athena was overreacting and that it was too much to ask for a man to have to be so careful even while just walking.

Meanwhile, the women in the comments section agreed with Athena on how they also appreciate it when men are considerate, it was also nice to see some men defend her saying that “The onus is on us (the menfolk) to give the assurance”.

“This is why I always cut the women in front of me when I walk or ride my motorcycle behind them. I know that women feel uncomfortable when there are men behind them. Anything can happen. Sorry to all girls for not being able to feel safe while walking alone”, said a user.

However, there were also some who pulled out the “not all men“ card saying that it was wrong of Athena to react the way she did as it is unfair for her to assume that all men who walk behind women have bad intentions.

“It may not be all men but we don’t know which men. So if the shoe fits, wear it?”

Last but not least, there were many users who thought that asking men to act the way the man Athena encountered did was to take away their freedom, to which one netizen replied, “Appreciate it. Women have never been free since the day we were born.”

“We’re wrong regardless of whether we’re careless or careful. We seem to always be wrong,” added the netizen.

What do you think of the whole situation? Let us know in the comments!

Also read: M’sian Shares Horrifying Experience of Stranger Trying To Break Into Her Car Before Unzipping His Pants