Interior design is probably the most exciting part about buying a new house and moving in. And it’s only natural for us to share our efforts on social media, especially when we’re proud of how far our new home has come!

Despite the various praises Hanis received from fellow celebrities and fans alike, Instagram user @eqienura, questioned Hanis’ decision to place a mural on the ceiling and the logistics of doing so.

In her comment, she writes: “Hopefully you didn’t use wallpaper for the ceiling, if yes, good luck sis. A certified ID (interior designer) will crack their head to solve site issues, structure and mechanical issues first and ID comes later, and deco comes last.”

“I hope your followers can differentiate between Interior Design and interior Deco. Because people need to be aware what happen if you simply use wrong material and finishes on places where it isn’t suitable just to make it look appealing to the eye.” 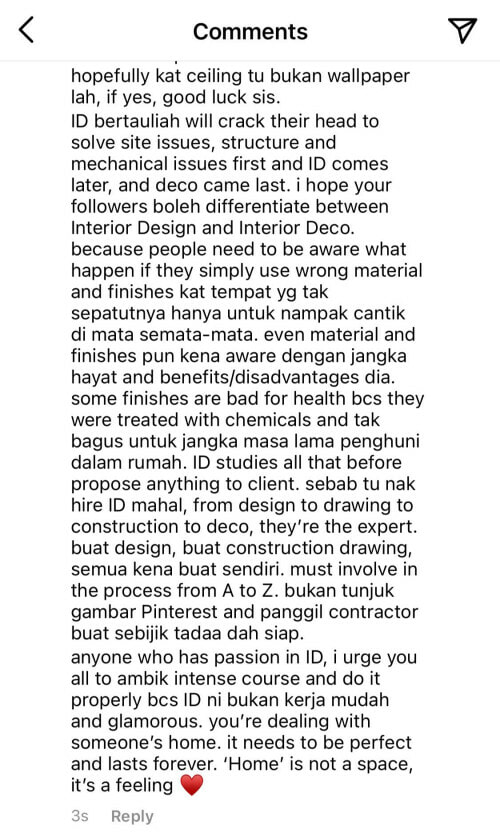 Eqienura Mokhtar encouraged Malaysians to be wary of what materials they use, as they could cause health issues or other disadvantages. She also urged aspiring Interior Designers to do intense courses and to study properly because Interior Design is a difficult job and holds a lot of responsibility.

In her Facebook post, she doubles down on her concerns regarding the wallpapered ceiling, asserting that it will cause issues in the long run due to the humid and enclosed nature of the toilet, as she has and still is working on a house from the same site as well.

“Sure, you have the money and you can decor your house as you pleased but please, if you not an expert don’t show bad example to your followers/fans and the saddest part is that they have no idea that thing can’t work on wet humid enclosed area, and then they will influence people to follow similar decor,” she writes.

The actress had also personally messaged Eqienura saying that she never claimed to be an Interior Designer and that she had used the hashtag #decorkeknis to ensure that her fans wouldn’t misunderstand. However, Eqienura points out that her husband’s post misleads fans to think otherwise.

In his caption, he writes: “This is how our house looks like after six years before @haniszalikha transformed it. She designed everything, before asking me “what do you want?”. I only asked for a foosball table but didn’t get it, she said it messes up the Interior Design and that there was no space…”

Eqienura also made a separate post warning fellow Malaysians who plan to design their own homes in the future.

“If you want to design / decor the interior of the house or whatever, don’t waste your money on putting wallpaper on the ceiling. It’s beautiful but useless if next year the wallpaper starts peeling off. Not only that, all fungi with bacteria will get trapped beneath the wallpaper, creating mold that is very harmful and toxic for your health!”

WORLD OF BUZZ has reached out to Hanis Zalikha for further comment but due to confidentiality matters, they have decided to withhold their thoughts.

So, what do you think?

Also read: Malaysian Celebrity Advises Women to Let Husbands Have Hobbies, But on One Condition 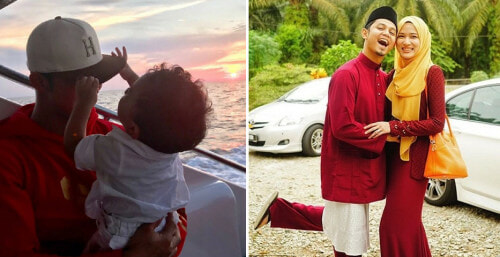