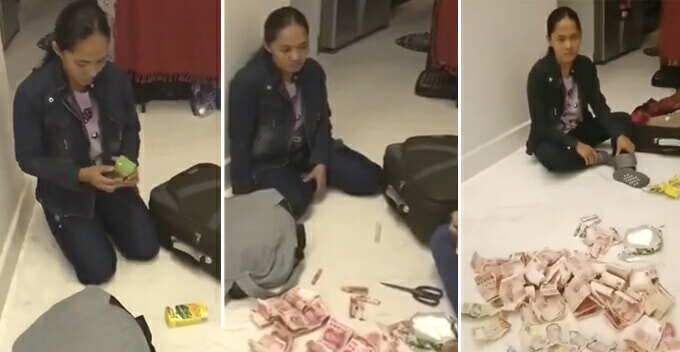 Well, this maid has certainly gone the extra mile to conceal the money.

On 6 March, a netizen named Nicole posted two videos on Facebook exposing how her maid tried to smuggle a huge amount of cash back to her home country. Luckily, she was able to see through the maid’s trick before she got on the plane.

According to China Press, the maid in the video had just finished her term of service in the country and was ready to return to her home country. However, just before Nicole gave her a ride to the airport, she noticed the maid was behaving strangely and decided to take a look at the packet drinks that the maid insisted on bringing along with her. That’s when the maid kena kantoi.

Here’s the video of the confrontation that took place in their Selangor home.

As you can see from the videos above, the maid had emptied the packet drinks and stuffed the money from the bottom and sealed the boxes to avoid detection. The banknotes consist of Singapore Dollars and Chinese Yuan, which Nicole suspected was stolen this month (March 2019) during Chinese New Year.

It was understood that Nicole and her husband had given their child an ang pau that contained RM6,000 worth of Singapore Dollars. Sadly, the ang pau was replaced by another one that contained only RM10. The maid was the main suspect but she didn’t confess and the employers didn’t know what to do with her.

In the videos, the maid didn’t confess to taking the money and instead, buat bodoh when she was questioned. Nicole said she only wanted to keep the videos as evidence and to raise awareness but since the maid wasn’t cooperative, she might take legal action against the maid.

Well, the maid reaped what she sowed. 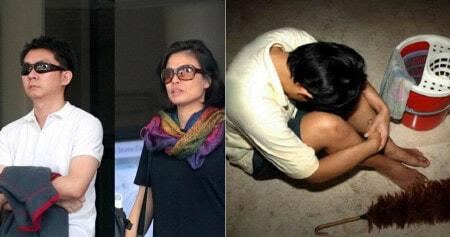