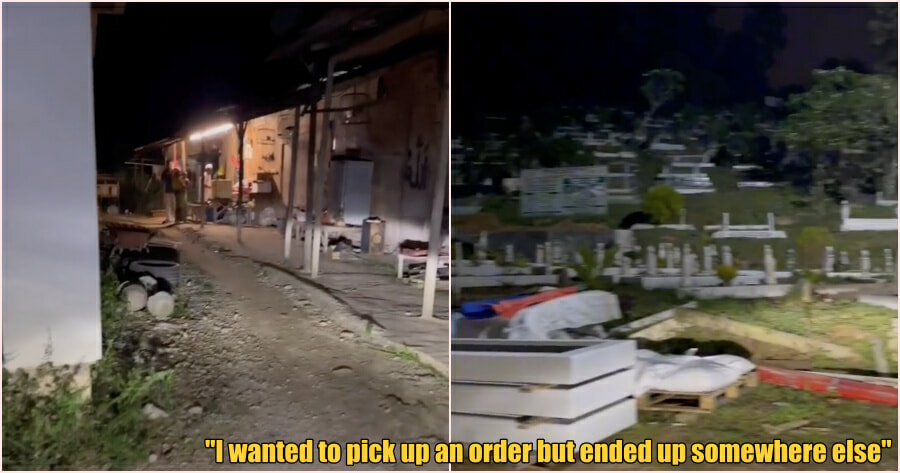 Recently, a story about a Malaysian YouTuber who pranked a food delivery rider to deliver food to a memorial park made headlines. But what happens if the same situation happened on accident and at night?

That is what happened to a Malaysian food rider named Angah who uploaded what had happened to him in a series of TikTok clips.

On the first clip which he uploaded on 5 October, Angah said that he was going to pick up his last order for the night but he could not find where the vendor was located. 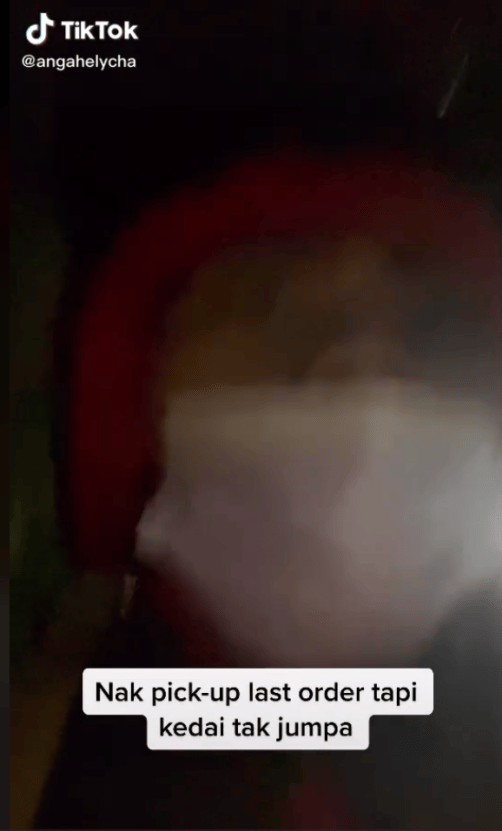 Spookily enough, the second clip that Angah uploaded showed him in a Muslim cemetery. The caption of the video reads, “I wanted to pick up an order but ended up somewhere else.”

He explained in the clip that he had gotten lost and was unsure how he had ended up there. He then turned around and hastily exited the burial ground on his motorcycle.

“I think I went the wrong way. There was an intersection just now.”

Angah turned back to the intersection and tried to take the other road. However, he ended up on a small dark path. 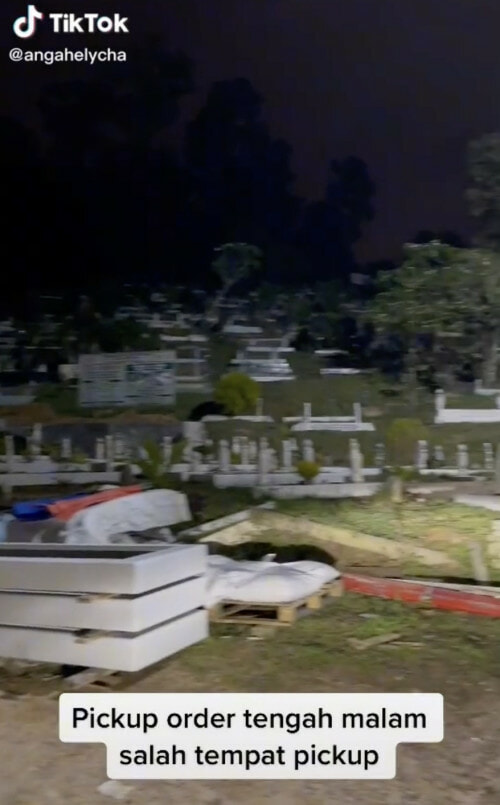 Fortunately, as shown in the next clip, Angah managed to find the small restaurant which was hidden in the dark next to another building. The clip also showed that the road to get there was hilly and rocky and Angah had struggled to get his motorbike up the hill. 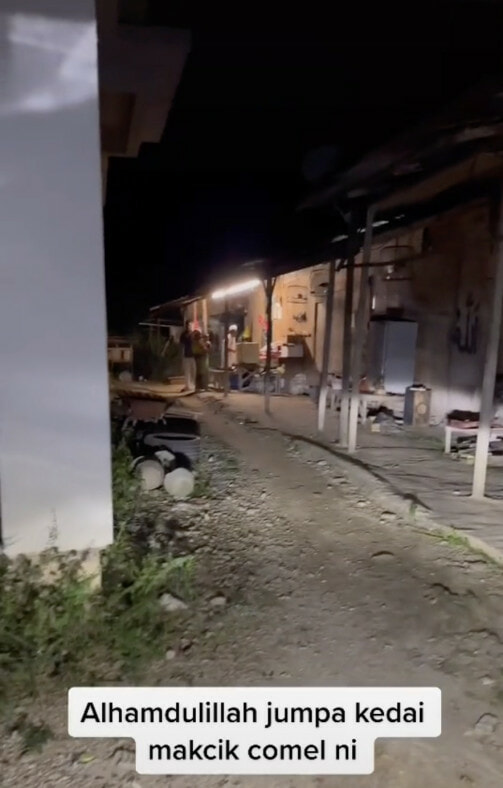 In an interview with mStar, the 25-year-old explained that it was his first time picking up an order from that restaurant.

“The incident happened around the Pantai Dalam area. It was my last order for the night and was around 11pm.”

“At first I called the restaurant, the man said that there will be an intersection once I arrive. I didn’t see that there was a small intersection, that’s why I got lost,” he added.

“That’s how I reached a cemetery, it was a Muslim burial ground. I was shocked at the time, it was already late at night. I was not thinking about any supernatural disturbance, I was just worried it was a prank,” he said. 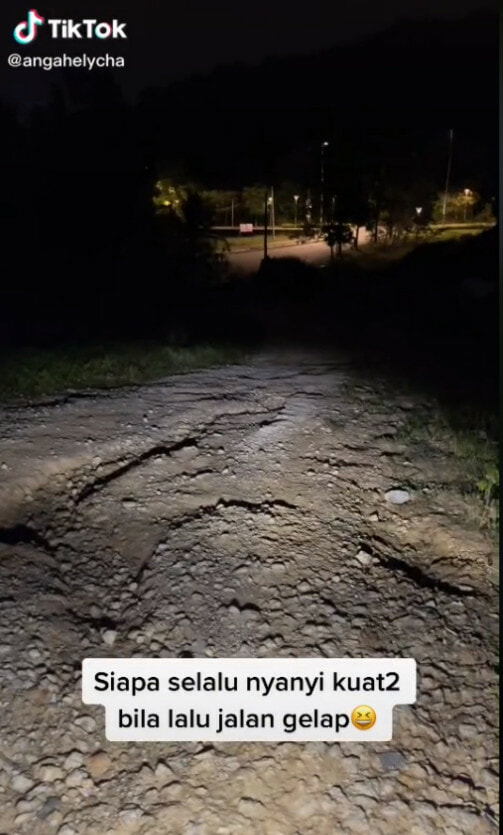 Thankfully, Angah said with relief that he managed to collect and deliver the food without any disturbances. “I have yet to face any strange disturbances. This was the first time I ended up in a graveyard, however, I have once gotten lost in an estate.”

“Actually I’m more afraid of people than ghosts. I’m scared of getting robbed and all. In the past, I had received a prank order. When I reached the drop-off area, it was just dark and there wasn’t even a house there.”

Some netizens pointed out a dark figure under the tent

The video has garnered plenty of attention and currently has over 495,000 views on TikTok. Some commented that they had seen a dark figure under the tent.

A user said, “did anyone see what is underneath that tent?”

Whilst another said, “you guys can pause and see under that tent and zoom closely. are my eyes broken?” 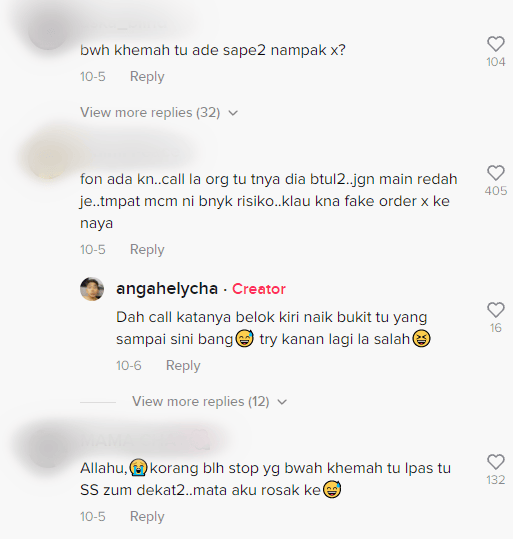 However, Angah said that it was merely a chair.

“I just shared the video for fun. A lot of comments said that they saw a ghost under the tent at the cemetery. It was just a chair. Nothing else. Some also said they saw a Pontianak, I was amused reading the comments,” he said.

Watch the series of videos on Angah’s TikTok. 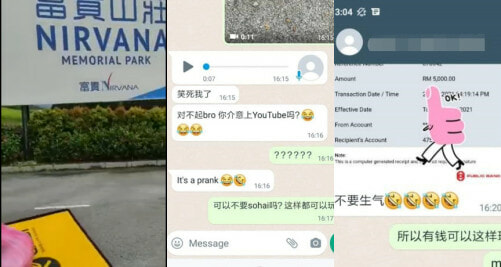