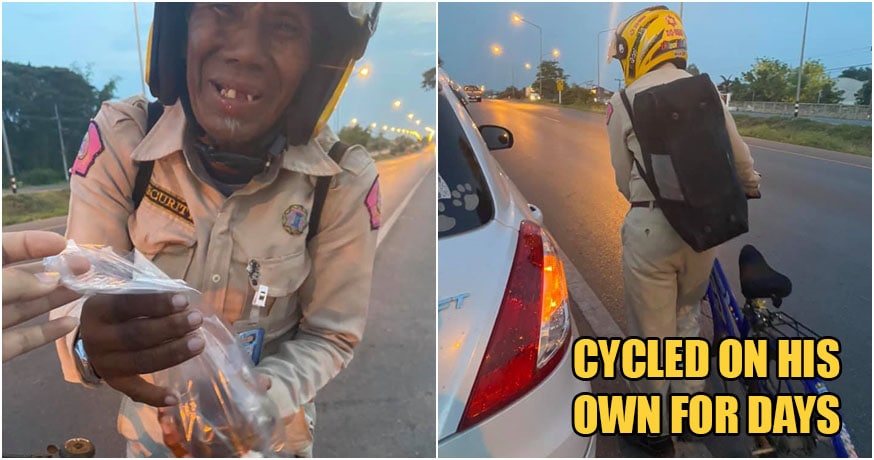 While it may be a difficult reality to face, it is inevitable that with a looming economy downturn as a result of Covid-19, more and more people may wind up losing their jobs and sources of income. However, for some people, losing their source of income can lead to some incredibly dire situations.

In a heartbreaking story that was recently shared over Thai social media by netizen Wipaporn Rungchot, where an elderly grandpa who was recently laid off from his job as a security guard was left with no choice but to cycle back to his home village.

What makes this all the more tragic is the fact that the elderly grandpa had no money on hand to buy any food or water for himself during the length of the difficult trek.

Beginning his journey from Rayong, the elderly grandpa had hoped to cycle back to Ubon Ratchathani, which is located over 630km away and would take upwards of days to reach!

Still dressed in his uniform, Ms Wipaporn said that the elderly man looked exhausted from cycling such a long distance and appeared frail. She even found out that the old man had problems with his vision.

“He had no money to treat his eyesight.” she said.

Despite the fact that some kind passer-bys had bought him a meal, it was apparent that the elderly man’s health was not in good shape, and Ms Wipaporn expressed her concern over his condition.

It is said that the old man is still trying to make his way home, and Ms Wipaporn has no idea as to his whereabouts at this time after she giving him some money to help him along his journey.

We hope that those in Thailand who encounter this elderly grandpa will lend him a hand and help him get home!