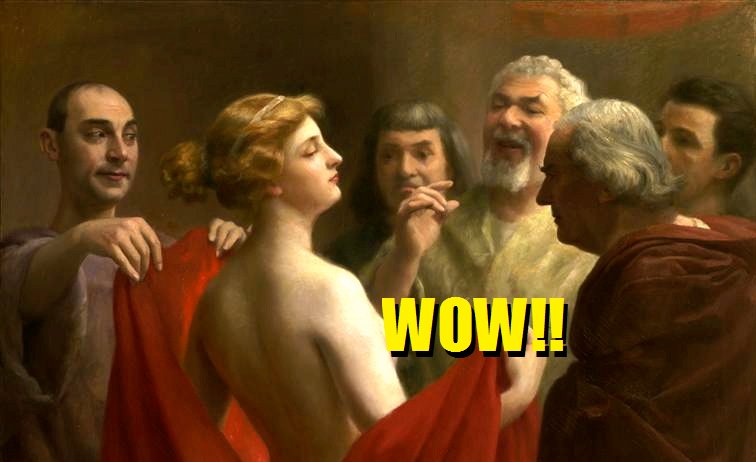 According to Greek legend there was a famous prostitute who managed to avoid a death sentence by showing the judges her boobs and arguing that it would be a crime against the Gods to destroy something so beautiful.

Before you ask, yes there are paintings of this. And yes, they’re amazing.

The courtesan named was named Phryne and she was indeed a renowned beauty, and was indeed was put on trial for a capital crime.

While the exact details of what went down that day in court aren’t known in full, one of the more popular recollections of the trial state that Phryne tore off her robes in the middle of the courtroom to show the judges her breasts. Her reasoning was that only the Gods could sculpt a body so perfect and as such, killing or imprisoning her would be an affront to them. 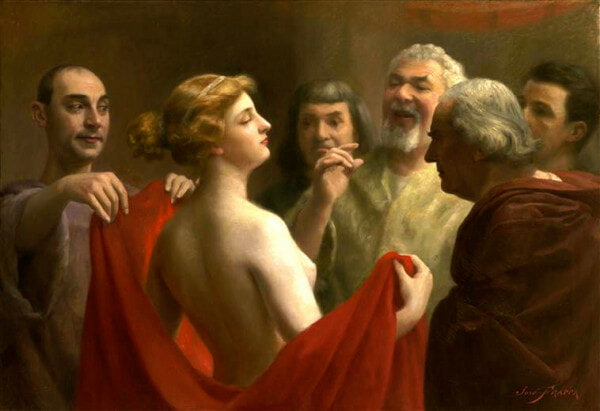 Other versions of the tale suggest that Phyrne’s legal representation is the one who removed or advised the removal of her robes, though their arguments for doing so were basically the same. That it would be a crime against the Gods themselves to not allow that beautiful body to walk free and that Aphrodite would be very angry if they destroyed something crafted in her image.

But this is actually a very interesting case of Values Dissonance – the capital crime she was accused of was blasphemy. In Ancient Greek society, exceptional beauty was a sign of favor from the gods, and they took the idea that beauty indicated goodness with great seriousness. They even called their nobles Kaloi k’Agathoi, “the Beautiful and the Good.”

So by showing off her great physical beauty, Phryne was being very clever indeed, her argument essentially being “How could I possibly commit blasphemy if the gods have given me this body?“

”If these tits are legit, you must acquit.”