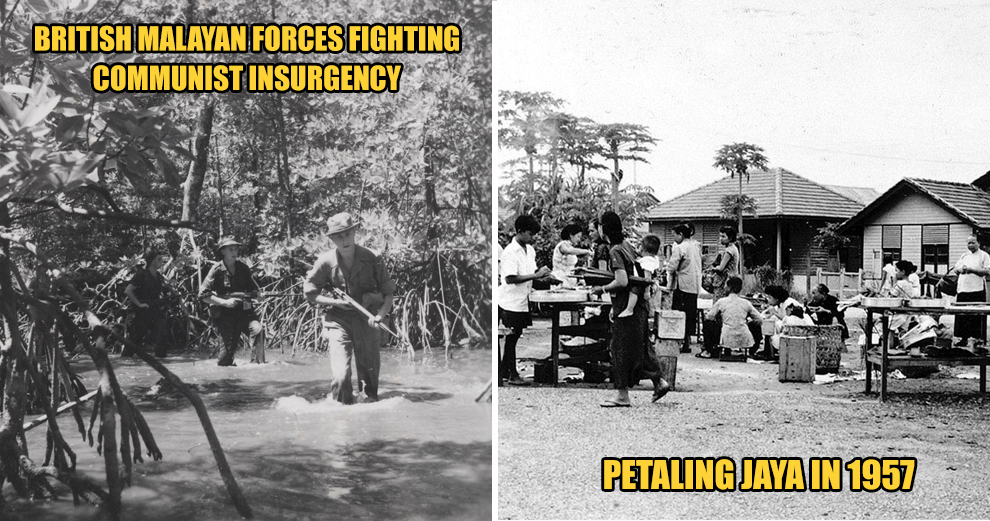 One of the most urban locations in the whole of Malaysia, it’s hard to fathom that Petaling Jaya only got its “bandaraya” status in 2006. However, did you know that the city actually holds a major significance in the fight against communist insurgency in pre-Merdeka Peninsular Malaysia?

In fact, Petaling Jaya’s origin actually has a direct connection with the Malayan Emergency, one of the most intense timeframes in our nation’s history! Here is the untold story behind the founding of Petaling Jaya that many Malaysians don’t know about. 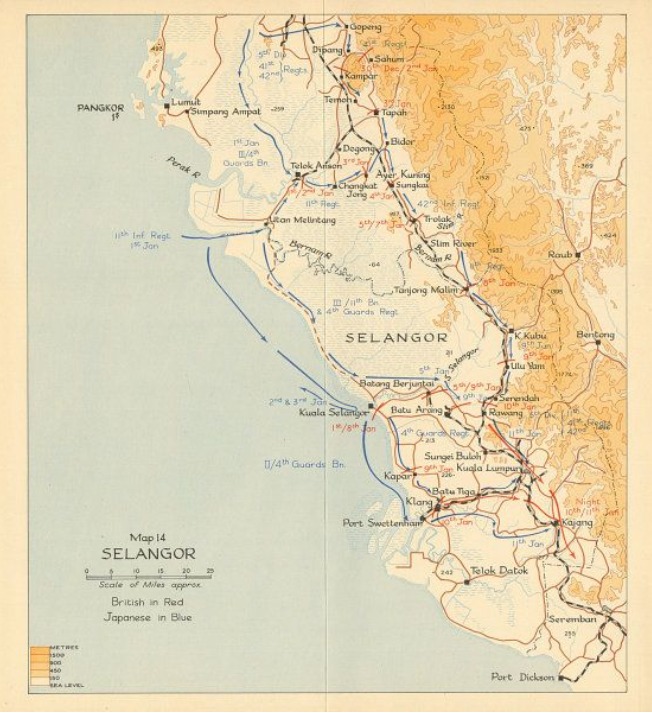 According to MBPJ’s executive summary, prior to the 1950s, the area now known as Petaling Jaya was a 1,200-acre rubber estate called the Effingham Estate. So how did a rubber estate become one of the most urbanized cities in our country? The answer lies in Petaling Jaya’s opportune geographical location.

Specifically, its proximity to Kuala Lumpur, the regional economic hub of the British Empire in Southeast Asia since the 1850s. As explained by Mother Earth Travel, Kuala Lumpur was the administration centre of the Federated Malay States after World War II which consisted of: 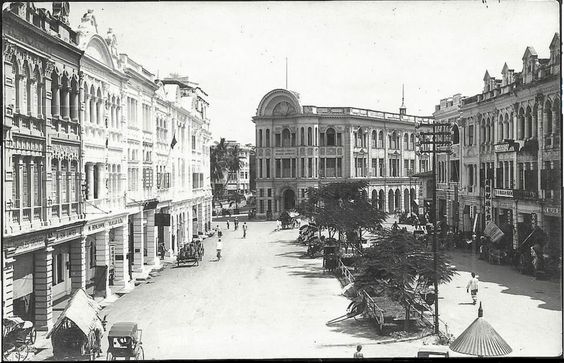 That’s why the British administration decided that a satellite town was the most logical solution to an overcrowded Kuala Lumpur. So what is a satellite town? The Oxford Dictionary of Architecture defines it as:

“Towns that are self-contained and limited in size, built in the vicinity of a large town or city to house and employ those who would otherwise create a demand  for expansion of the existing settlement, but dependent on the parent-city for population and major services.”

However, that was just one of the reasons Petaling Jaya was founded and growing exponentially in the 1950s. The main reason has something to do with the shift in the world’s geopolitical climate after the end of World War II which saw Eastern and Western Blocs struggling to become dominant global forces. This period was also known as the Cold War.

2. Communist insurgency and the Malayan Emergency 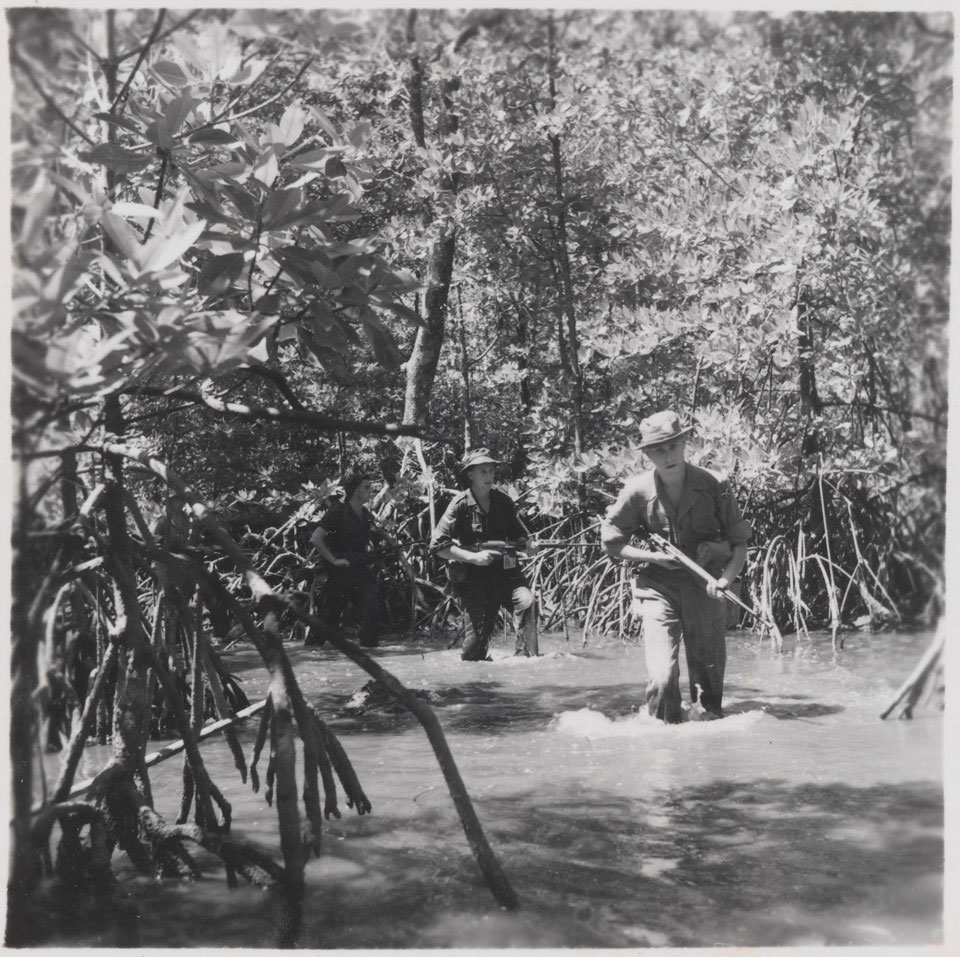 Between the 1950s and the 1980s, Southeast Asia was a region that was heavily impacted by the Cold War through proxies which saw its peak during the Vietnam War. Prior to that infamous war though, Malaya was seen as the main battleground for stopping the spread of communism in the region by the Western Bloc, specifically by the British.

At the end of World War II, the newly independent Indonesia allied themselves with the Eastern or Communist Bloc with President Soekarno bestowing tremendous influence on the now-defunct Communist Party of Indonesia. This is why Indonesia was heavily against the formation of Malaysia which led to the infamous Indonesian-Malaysian Confrontation or the “Ganyang Malaysia” operation in the 1960s. 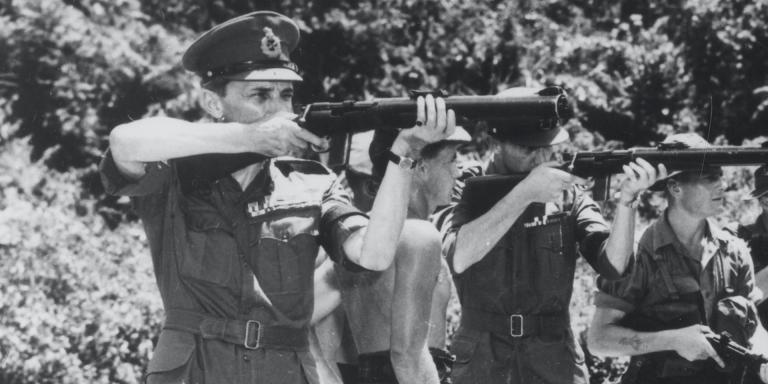 Seeing how communism had a stronghold in Southeast Asia through Indonesia, the Western Bloc decided to stop communist propaganda from spreading to the Malayan locals. At the same time, the Malayan Communist Party (MCP) sought to seize the opportunity of Japan’s surrender during World War II to stake a claim on Malaya through a series of guerilla attacks.

Australian War Memorial recounted the events of the Malayan Emergency which killed 15 Australian servicemen who were stationed in Malaya to aid the anti-communist cause of the British here:

Although they only had a few thousand members, the MCP was able to draw on support from the locals, especially the Malayan Chinese due to these reasons:

The fact that MCP relied heavily on guerilla tactics and communist sympathizers in Malayan rural areas, the British–through a newly appointed High Commissioner–believed a relocation of the Malayan Chinese population to a new urban area is the best way to curb support for the party. 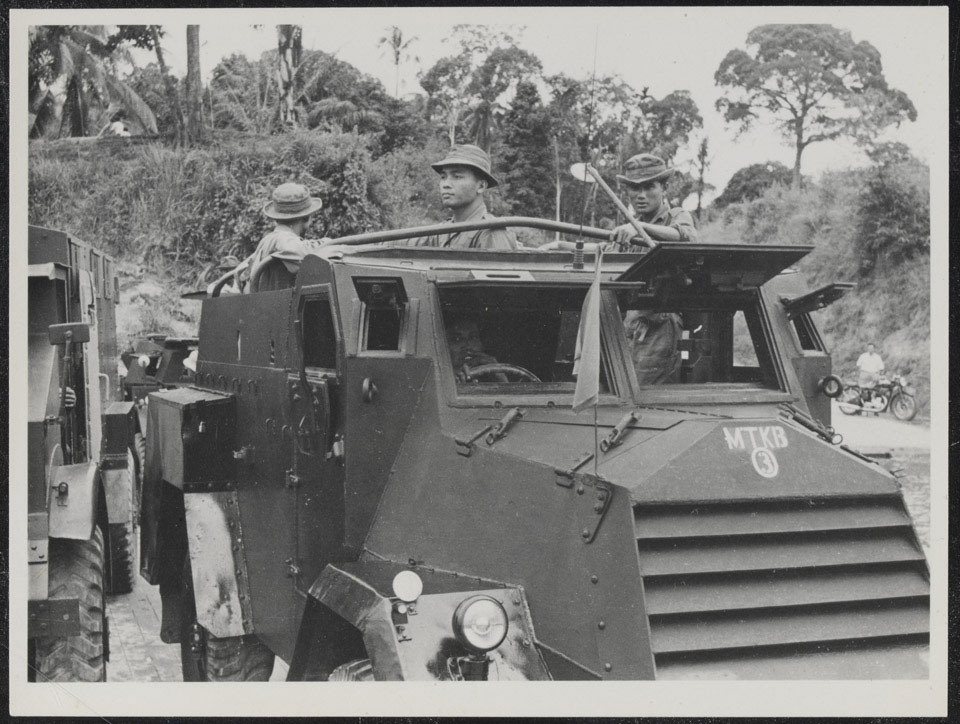 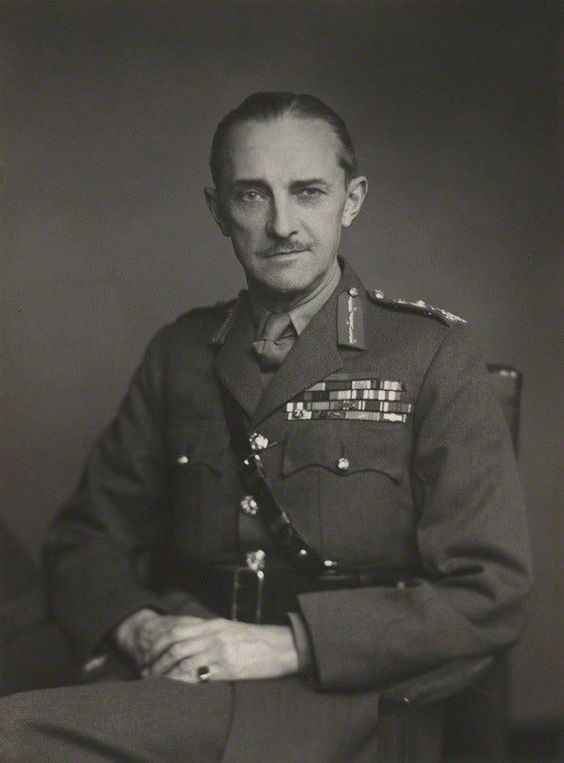 Sir Gerald Templer, dubbed the “Tiger of Malaya” was appointed British High Commissioner in Malaya by Winston Churchill on 22 January 1952 to specifically deal with the Malayan Emergency. He worked closely with Robert Thompson, the Permanent Secretary of Defence for Malaya and concentrated his efforts on intelligence rather than sheer military force.

His famous words regarding the Malayan Emergency is referenced in the book End of Empire here,

“The answer (to the uprising) lies not in pouring more troops into the jungle, but in the hearts and minds of the people.” 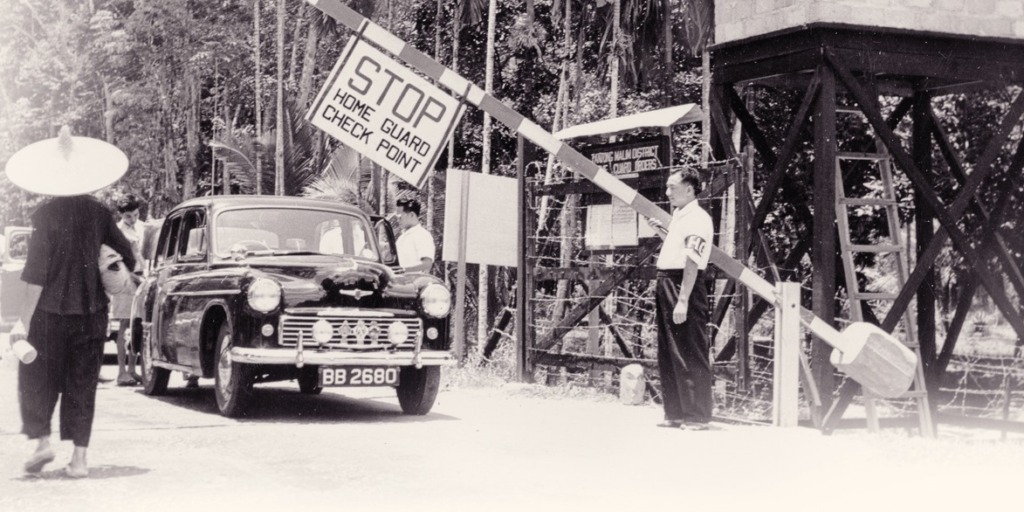 A guarded checkpoint during the Malayan Emergency | Source: National Library of Singapore

These were his policies during the communist insurgency which proved highly effective:

The major decision he made as High Commissioner was relocating Malayan Chinese away from the jungles to newly built towns that were fenced off from the surrounding area. This limited the reach of the guerilla communists significantly.

One of these newly built towns was Petaling Jaya. 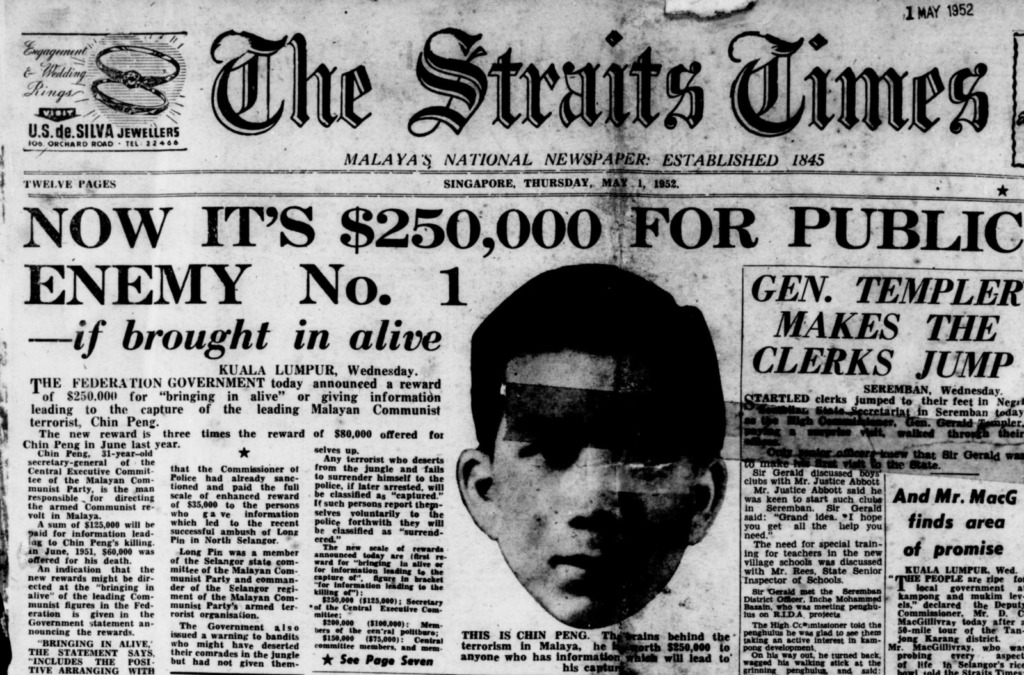 A reward for Chin Peng’s capture in the media | Source: National Library of Singapore

4. From township to city, this is how Petaling Jaya got its name and became the hub it is today 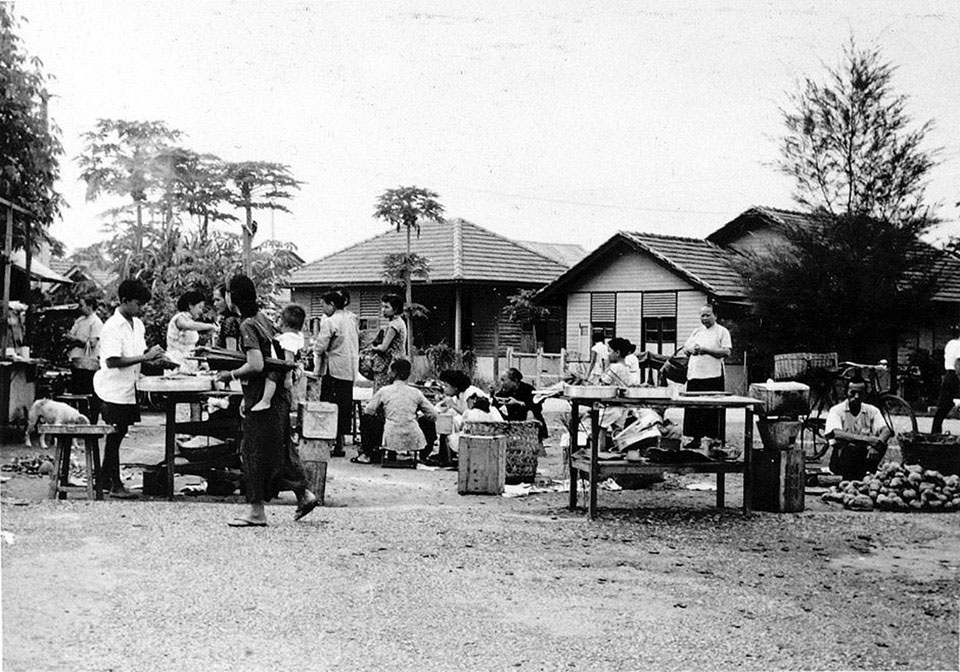 The Effingham Estate was seen as the perfect location for a new town to relocate the rural ethnic Chinese to as it could also be a satellite town for Kuala Lumpur due to its close proximity. It started off as a town measuring just over two square kilometres, with its first two main roads simply called “Jalan 1” and “Jalan 2“.

According to Mother Earth Travel, this little pekan, or town in Malay, was the predecessor of what was to be known as ‘PJ Old Town‘ today. The name remains unchanged and it now includes Sections 1, 2, and 3 of Petaling Jaya. 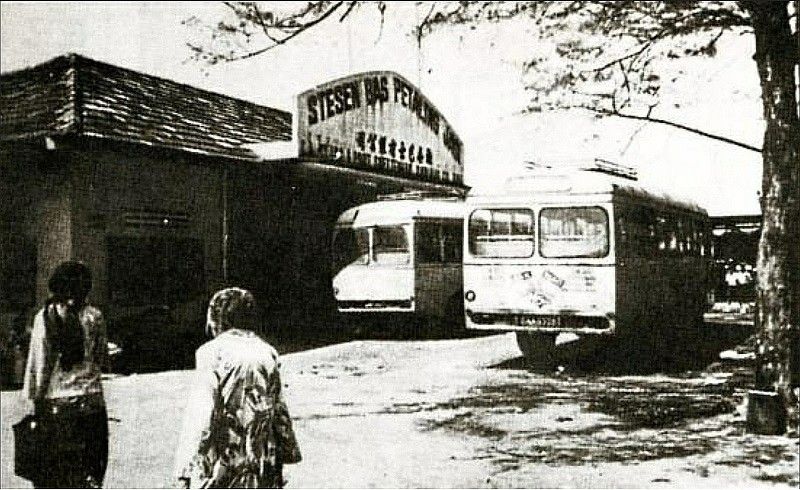 By 1952, the new town began to take shape when 800 houses were built and another 200 under construction. In fact, mass migration to the town started even before the town was officially named ‘Petaling Jaya’ in 1953.

Speaking of which, the reason it was named Petaling Jaya was due to its location in Selangor’s Petaling district and how it was an overnight success.

Hence the addition of the suffix “Jaya” to Petaling which literally means success in Malay. 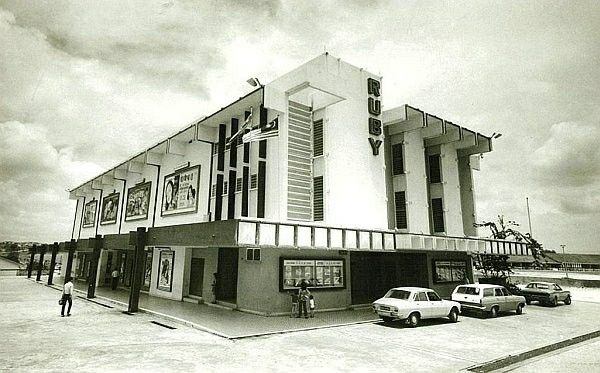 Petaling Jaya began to grow to become more than just a satellite town, with the below being the key years for its growth: 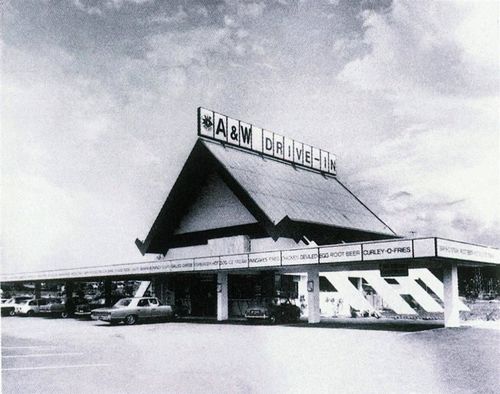 Fast forward to the present day, the city of Petaling Jaya is one of the most important economic and administrative hubs in our country. Who would’ve thought this urban city had such a unique origin right?

Know any other unique facts about Malaysian cities that the majority don’t know about? Share your stories with us in the comments section!

Also read: Here’s What ‘SS’ & 3 Other Selangor Area Acronyms Stand For & How They Came to Be 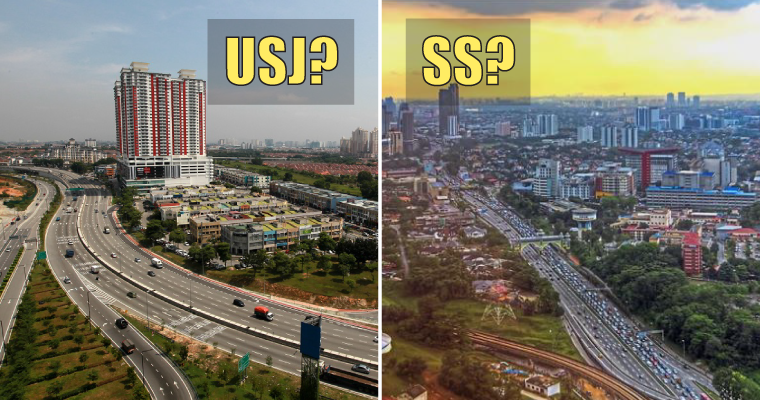