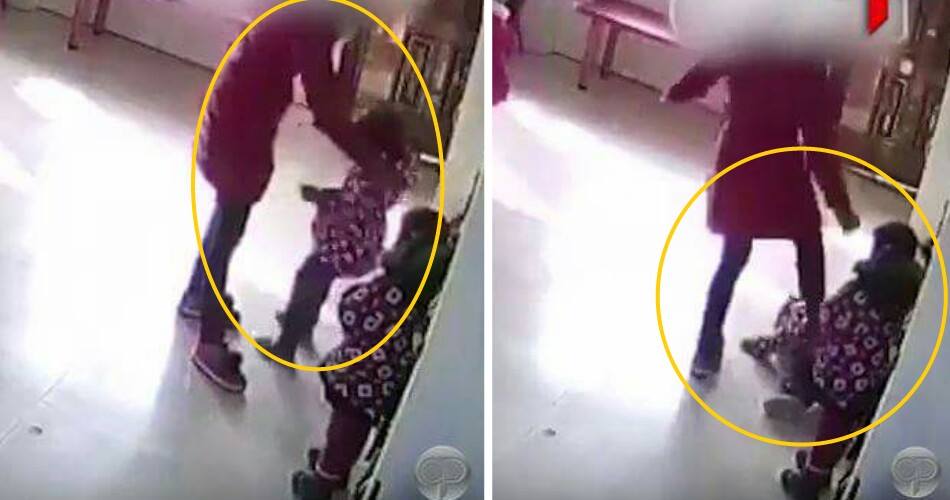 Children are the future. Therefore, we do our best to make sure they grow up better than we were to make the world a better place. That would mean giving kids lots of love and guidance.

But one kindergarten teacher must have not gotten the memo as she was caught abusing her own students!

A CCTV footage depicts the teacher slapping, hitting, kicking, and pulling the hair of two children in a kindergarten located in Anhui, China on December 22, Daily Mail reported.

The teacher slapping and kicking the poor child.

The horrible teacher was reportedly teaching the class how to dance for an upcoming show for Christmas.

Apparently, the two abused children could not memorise the dance routine, hence received their punishment through the assault.

And the two girls were only FOUR OR FIVE years old!!!

The teacher had pulled the two girls aside when they failed to dance accordingly the first time and kicked them.

Then, she continued with the dance practice but the two girls still could not cope with the routine. So, the impatient teacher pulled them away again and started slapping and poking them. 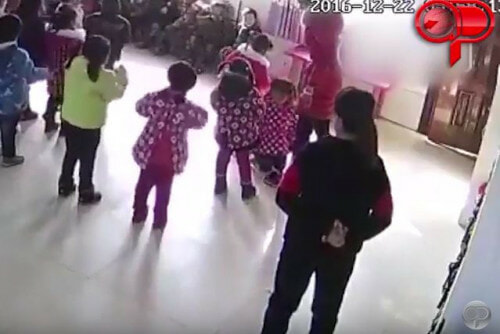 Another teacher standing by the side watching the abuse.

Worst of all, there seem to be another teacher in the same room. But she didn’t stop the aggression at all!

The young students must have told their parents about the abuse, so the parents demanded for the CCTV footage to be released. After watching the solid evidence of the despicable incident, the parents decided to sue the school.

The horrible teacher has since been fired and the school is currently negotiating with the parents on compensation for the children’s trauma.

The teacher poking the child’s head.

Of course, such an outrageous incident sparked the anger of netizens from all over the world. The comments section was filled to the brim with angry remarks.

“Wow! She really doesn’t like children. Makes me wonder why she has a job in a school with that attitude.”

But not only were they upset with the abusive teacher, they were also enraged by the lack of initiative by the other teacher.

“The worst thing about this is that there appeared to be other adults in the room and they didn’t intervene. Also, those weren’t just slaps, at least one was a punch.”

“The other teacher should have got the sack as well, she ignored the incident she is just as guilty.”

Indeed, the other teacher should have been punished for obviously letting the horrid teacher hit those kids.

Watch the terrible actions of the teacher here: