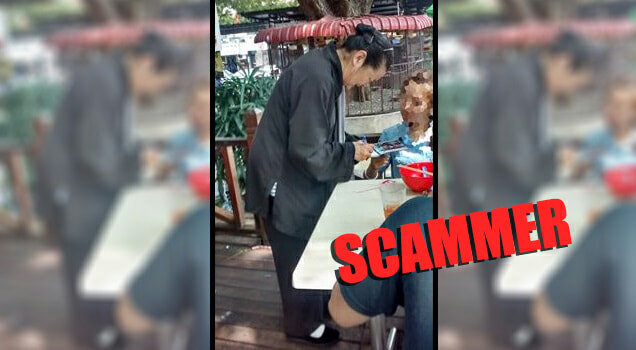 Most scams are lowest of the low. They prey on genuine people for money, hoping to strike some sympathy in them then conning them for their money.

Facebook user Ivan Cheah and his friends experienced the unfortunate incident and shares his story in hope that no one else will encounter the same scam. The lady has been operating around the area for a long time so beware!

He wrote in a post mentioning a 60-70 year old lady who’s around 5’2 and walks around with a hunch. She is usually seen dressed like a monk, in a black long sleeve traditional chinese clothing, white socks and black shoes. She will target the general public in that area, but her main victims are students or young adults.

He elaborates on her plan in his post, where he writes:

“Modus operandi:
How she usually perform her scams:
She normally walks around SS15 Asiacafe area and Starbucks/McD, this is due to the large amount of students there, students are more likely to fall into her scams as they are more naive and lack experience.

FIRST METHOD: She will walk towards you, and hand you a cheap amulet(just a cheap plastic laminated paper and a cheap keychain), first she will tell you it’s free of charge, then she will ask you to give her some money for her to eat. If you refuse, she will start scolding and insulting you, one friend of mine told me she once hit him hard on the shoulders, HARD.

SECOND METHOD: She uses this method more according to my friends. I’ve seen her using this method with my own eyes. She will show you some photos of some poor kids from disaster zones and ask for donations. According to my friend, if you gave her RM5, she will ask for more, minimum is RM10, and if you pretend not to have any money, she will actually SEARCH THROUGH YOUR WALLET AND TAKE THE NOTE WITH THE HIGHEST VALUE, if you have RM50, she will take RM50 and write RM50 on the paper, even if you refuse. THIS IS ROBBERY, and a lot of students actually just let her walk away with it because they feel bad if they ask it back.

What you can do:
If you ever come across her, just reject her, even if she tries to guilt trip you into doing it. She does not need the money, she is a full time scammer / swindler and she has been operating around SS15 for some time already, probably affiliated with a syndicate.

You can also call the cops, but I high doubt the police will have time to deal with this.

Last but not least, SHARE THIS OUT, let everyone know her for who she really is!”

A user commented that he encountered the same ordeal, confirming that the lady will so shamefully take your wallet to grab money from it. So everyone beware!