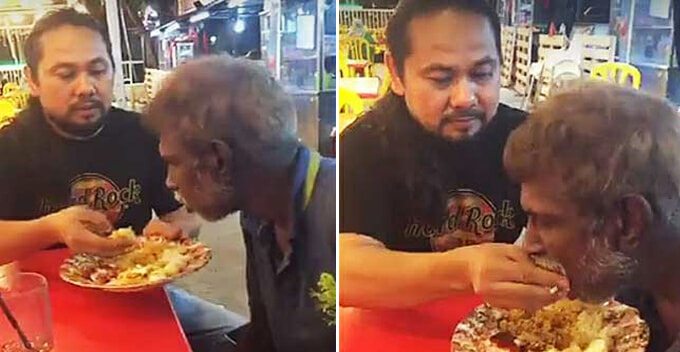 This heart-warming video aptly reminds us why Malaysia is such a unique and beautiful country.

In this over 2-minute video taking place at a food court, a Malay man with a ponytail was seen holding a plate of nasi campur feeding an Indian senior citizen with his hand, something that only a mother would do to her sick child. 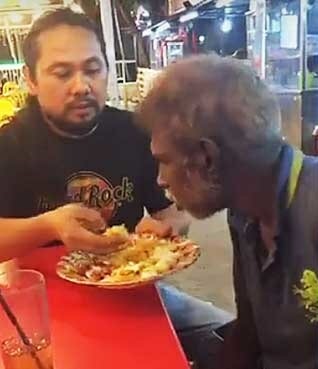 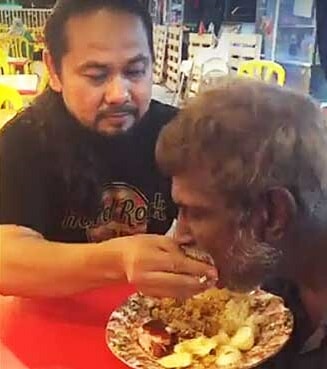 The old man was dressed shabbily in a polo t-shirt and shorts with no shoes. His shaggy grey hair and unshaven beard suggested that he was homeless although it can’t be confirmed.

Most people will go out of their way to avoid homeless people but this man did not. Instead, he took it a step further by feeding the man some food!

The Malay guy skillfully scooped up some rice with his hand and gently pushed the food into the old man’s mouth. Then he waited for the old man to finish swallowing the rice before feeding him another serving.

After being fed a mouthful or two, the old man gestured that he didn’t want anymore food presumably out of shyness since couldn’t maintain eye contact with the Malay man for more than seconds.

When the Malay man continued to feed him more food, he willingly accepted the food and washed down with a sip of drinks on the table.

While waiting patiently for the man to swallow the food, the Malay man cheekily said to passer-by:

“Have you eaten yet? Come here, let me feed you too.”

After the Indian man swallowed another serving, he waved his hand again saying he didn’t want anymore food. But the Malay man insisted on feeding him and said:

“Have you eaten yet? No right? Come, just one more serving.”

At this point, the Indian man stood up and walked away while politely gesturing that he’s had enough of food but the Malay man hoped that he can at least feed him another serving.

So he followed the Indian man with the plate of rice for a few pace while asking:

Seeing the Indian man strongly rejecting the food and pacing further away, the Malay man stopped persuading him and proceed to washed his hand. He placed the unfinished plate of nasi campur on a table.

The friendliness and love showed by the Malay man struck a chord with netizens who complimented the man’s kindness and patient.

“It’s hard to find someone like you. You are an example and a good role model for our young children.”

“Brother, now you’ve become my hero. There’s so much racism issues in Malaysia right now and you’ve set an example for all the other Malaysians to follow.”

Honestly, this video has restored some faith in humanity and Malaysians are proud to have a citizen like you.