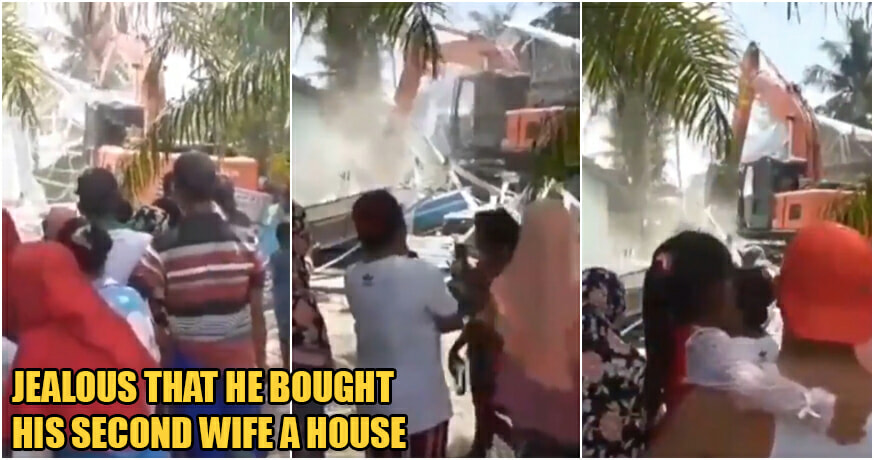 Polygamy, while a hotly contested issue in many Southeast Asian cultures, has been advocated by some communities as being a viable means of starting and maintaining a family institute. Bearing in mind virtues of honesty and transparency, families from polygamous marriages have been known to exist in relative harmony despite facing doubts from naysayers.

But not every polygamous relationship works out that way, and for one woman in Indonesia who happened to be in a polygamous triangle, she wasn’t the least bit enthused by it at all. Just recently, a viral video was shared within Indonesia when it was found that a man’s first wife, known only as M, had hired an excavator and sent it to his second wife’s new home to have it demolished.

As reported by Indonesian daily Tribun News, the incident was said to have taken place in Desa Mangga Dua, a village located in North Sumatera, Indonesia. From local sources in the village, it was revealed that the man’s first wife had apparently discovered that he had bought his second wife, a much younger woman, a brand new home.

Likely spurred by jealousy, she then sent an excavator to the site of the new home and had it demolished.

In video footage recorded of the incident, villagers gathered around the site of the home after the excavator can be seen tearing down the facade of the home. Some had even called for the man’s second wife to leave the home immediately. She is said to be three-months pregnant at the time of the incident.

The authorities are reportedly investigating the case, but at this point in time, no further mention as to what had transpired was revealed to the press.