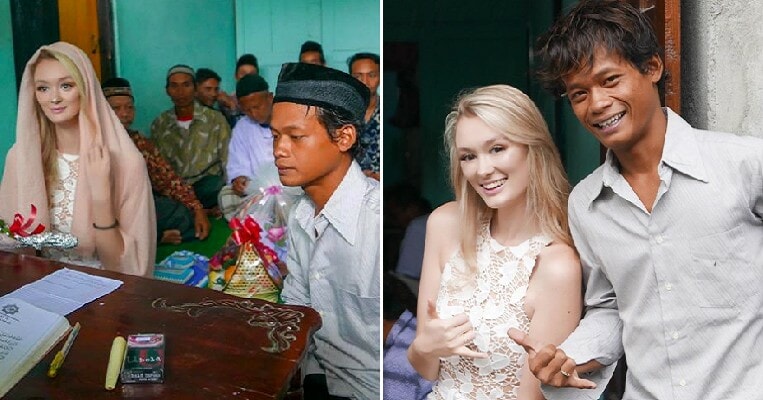 Love can be difficult enough to find in your own country but this lucky couple from two countries far apart managed to fall in love and got married! Indonesian social media has been abuzz recently when news of a 26-year-old guy from Magelang, Indonesia married a 21-year-old girl from Manchester, England. 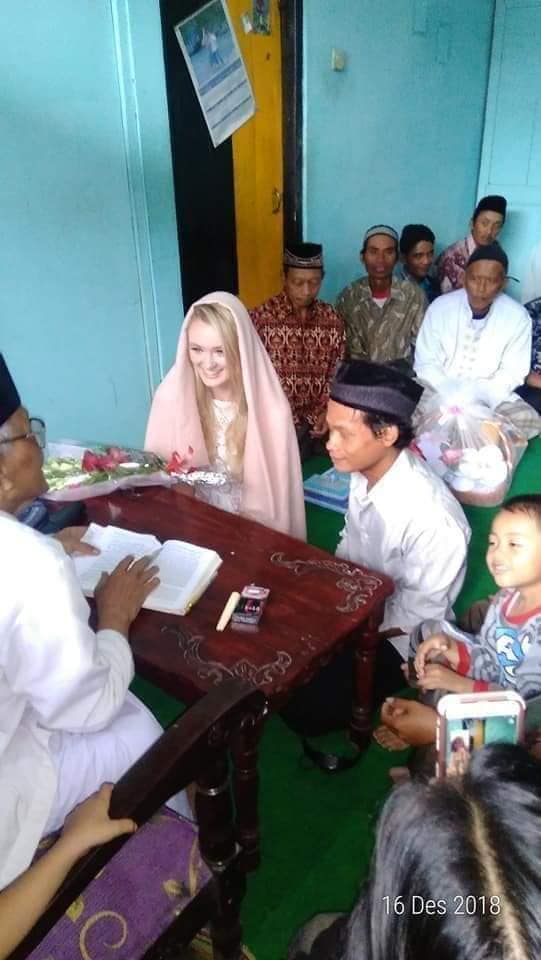 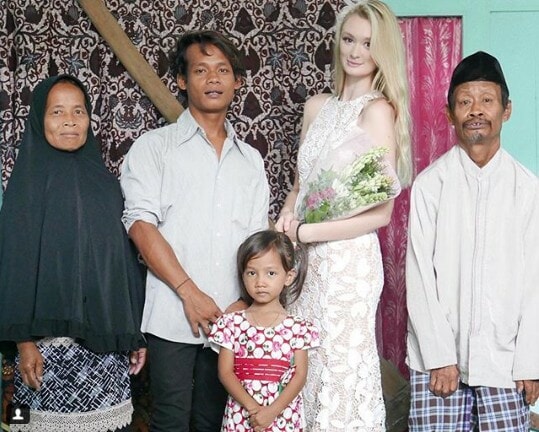 According to Okezone, the guy’s Instagram account is known as Karna Radheya and the girl has been identified as Polly Alexandria Robinson. They had been together for some time before the happy couple decided to tie the knot in a simple Muslim wedding ceremony on Sunday (Dec 16).

Photos of their ceremony went viral on social media showing Polly smiling happily while clad in a modest white dress and a pink shawl covering her head. Meanwhile, her husband, Karna is next to her listening solemnly to the wedding officiant. 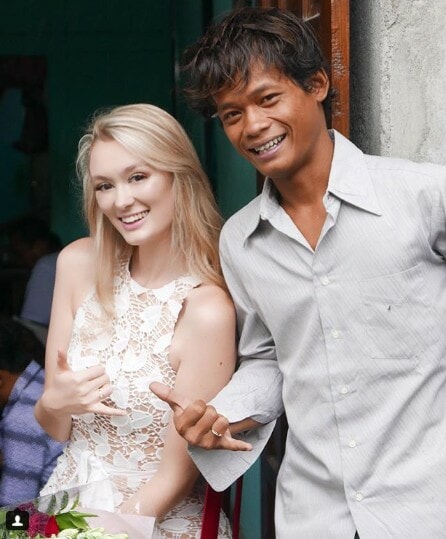 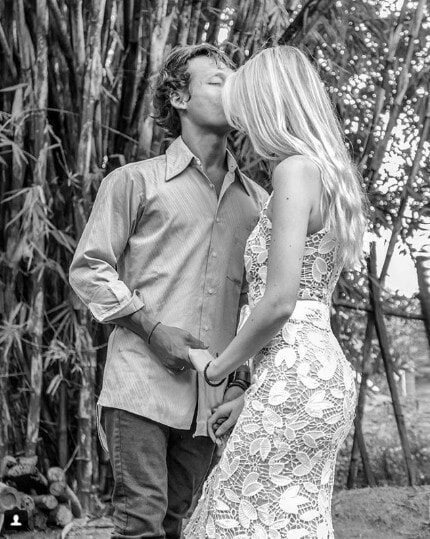 Apparently, the couple had met each other over a year ago in Bali in August 2017. At that time, Karna was working in Bali when he met Polly and both of them hit it off, based on a report by Tribun Jogja. This led to many other meetings and as they got to know each other better, they fell in love.

After about one and a half years of having a long-distance relationship, they decided to take it further and got married in a blissful ceremony on December 16. At first, Karna said that he couldn’t believe this beautiful girl would fall in love with him. Other people would also brush off their relationship but over time, the couple said their bond grew stronger and they were ready to take it to the next level. 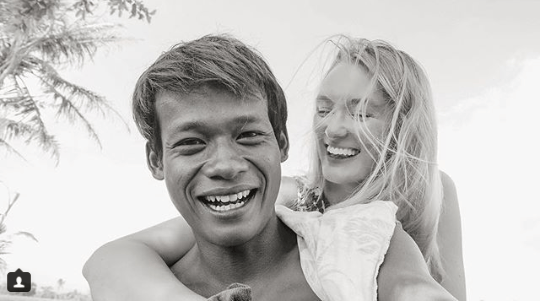 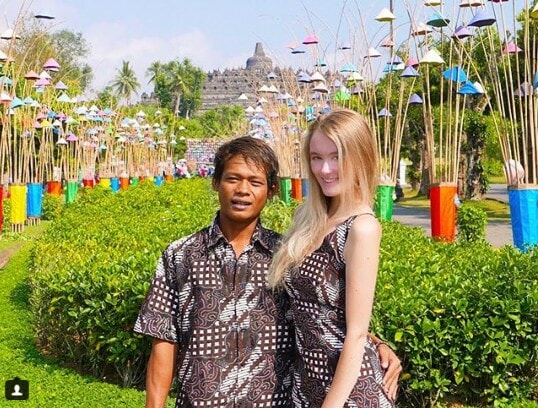 He said, “This is fate. I never asked for a foreign wife but God has decided that Polly should be my wife and I am truly thankful for this.” Polly also decided to convert to Islam six months before their wedding as she really wanted to marry Karna and he said that he was in the process of applying for citizenship for his wife.

The couple had their wedding in Magelang and it was attended by Karna’s family and although Polly’s family were not in attendance, it was reported that they had given her their blessings as well. After tying the knot, Karna and Polly headed back to Bali, where they are living now. Karna is also a certified surf instructor and owns a restaurant in Bali known as Luku Kitchen. 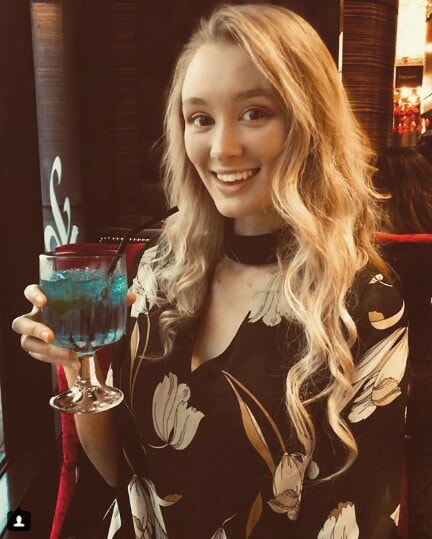 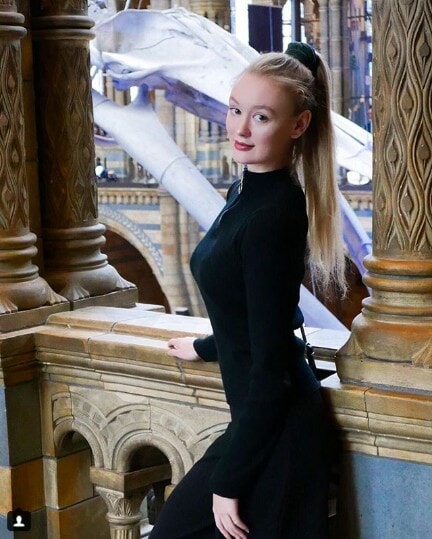 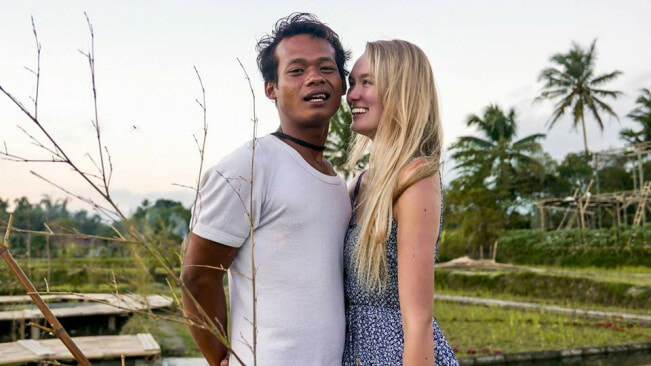 Karna said that he did not expect their marriage to go viral and photos of his sweet moments with Polly have also been circulating. “My only intention is to make our relationship halal. But since our story has already gone viral, I hope it will be an inspirational tale for netizens,” he added. Well wishes and congratulatory messages have been pouring in on both Karna and Polly’s social media accounts, with many netizens wishing them a happy marriage.

Stay sweet and have a loving marriage, Karna and Polly! 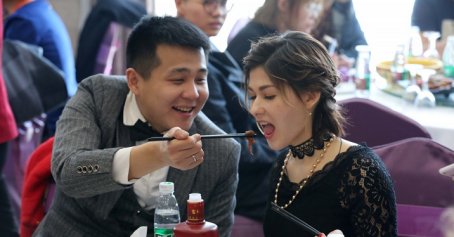