Let’s admit it, we’ve probably tried out Tinder at some point and for those of us who are lucky, we end up with a pretty decent date. However, one guy probably had one of the worst first dates ever because he was robbed by his Tinder date.

According to The Star, 34-year-old Foong Wei Chieh thought he was invited by his Tinder match, 24-year-old Mizan Qistina to her condominium at Cova Suites, Kota Damansara for sex. Without suspecting anything, the victim went up to her condo unit to find her already naked.

Much to his horror, another man who was allegedly her ex-boyfriend entered the unit after that and “an altercation ensued”. The robber reportedly went down to Foong’s car and stole his wallet too. After cleaning out Foong, the girl went to an ATM (Automated Teller Machine) and withdrew all his money.

It was reported that Foong’s handphone and RM1,500 case were taken from him as well. Fortunately, the authorities were quick to identify the accused but only the girl got caught and her accomplice still remains at large.

Following that, Mizan was found guilty of robbing her date by using a weapon (knife) and she was sentenced to six years in jail.

The sentence against Mizan Qistina Razali was passed by sessions court judge Mohammed Mokhzani Mokhtar today (31 January 2019) after ruling that the prosecution proved that the case was “beyond reasonable doubt”.

FYI, this case was investigated under Section 397 of the Penal Code and if found guilty, the accused can face up to 20 years imprisonment and whipping.

Prior to the prosecution, the accused’s lawyer, Norhasham Hasan argued that his client was a “young offender” and requested the court to give a lighter sentence. He also mentioned that it was her first crime. The lawyer was quoted as saying,

“My client was influenced by her ex-boyfriend. She needs to support her family, as her father is no longer working.”

Nonetheless, DPP Asyhraf Ashy’ari Kamaruzaman insisted on a heavier sentence because it was an intentional crime and she used a dangerous weapon.

Well, we’re glad that the accused was given an appropriate punishment but we hope that the man who was involved in the crime will soon be caught too. As for us, let’s be a little more careful when we agree to go on a date with a stranger. 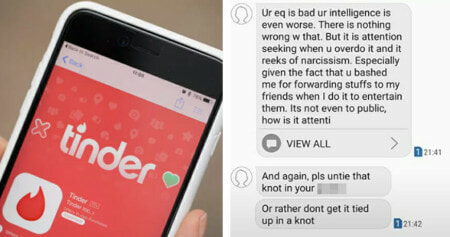