Former Terengganu Menteri Besar and Barisan Nasional (BN) Terengganu chairman Datuk Seri Dr Ahmad Said was today spotted breaking election rules when casting his vote at SK Teluk Kalong in Kijal, Terengganu. Ahmad Said, who is BN’s candidate for Kemaman was spotted wearing a shirt sporting the BN logo at the polling station, though he creatively tried to cover the party logo by putting a face mask inside his shirt’s pocket right below the BN logo.

Said shared several photos of him casting his vote at SK Teluk Kalong earlier today on his official Facebook page, which clearly shows that he is wearing a blue BN shirt while being inside the SK Kalong polling station. A closer look at the photos shows that the top half of the BN logo is still visible despite the strategically-placed blue face mask inside his pocket.

Ahmad Said, who is also the Terengganu State Legislative Assembly Representative (ADUN) for Kijal was among the earliest voters present at the SK Teluk Kalong polling station, arriving at around 7.55am, 5 minutes before the polling station opened. He was accompanied by 20 of his family members, including his wife Toh Puan Seri Norliza Mahmud and his 71-year-old mother-in-law Selamah Ngah.

In case you’re not familiar with election rules, wearing clothings bearing any political affiliation involving party logos, emblems or symbols within 50 metres of the polling station is an offence under Section 26(1)(g) of the Election Offences Act 1954. Any individual that fails to comply with this Act may be punished with a one-year imprisonment, fines less than RM5,000 or both upon conviction.

So, what do you guys think of the whole situation? Share your thoughts with us in the comments and stay tuned to WORLD OF BUZZ for the latest GE15-related news as it happens today! 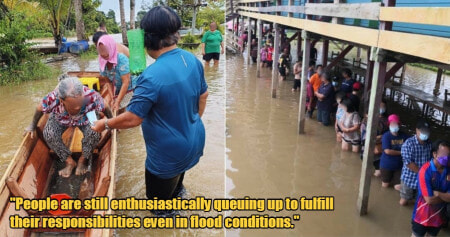