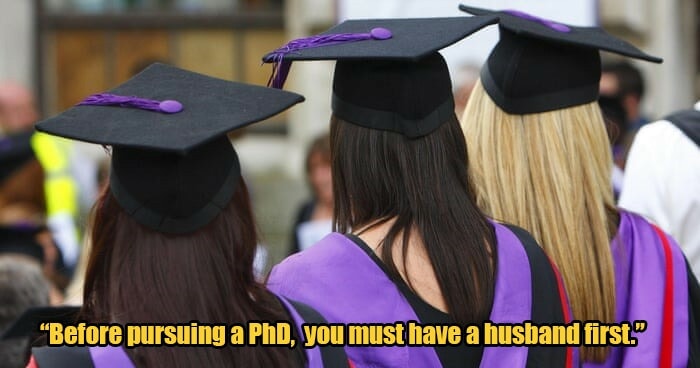 This is such a misogynistic and sexist statement!

A person on Twitter recently came under fire as netizens roasted him for posting a sexist statement on the social media platform. The person – who implied that he was an educator – gave a piece of advice to his ex-students, particularly his female students. He said,

“To my beloved ex-students: If you want to continue Masters, make sure you’re engaged (to a potential suitor) first. Then, if you want to pursue a PhD, you have to make sure that you already have a husband. If you don’t, you will become an old maid.”

Obviously, his “statement” didn’t sit well with the netizens even though we aren’t sure if the tweet was meant to be a joke or not because it’s obviously not humourous to anyone. Under the educator’s tweet, many netizens decided to give their two cents as they strongly disagreed with his statement.

One netizen said that for an educator, the person made a really dumb statement; meanwhile, another person fired back as she said that there’s no point in marrying if women were to end up with husbands like him. True that! 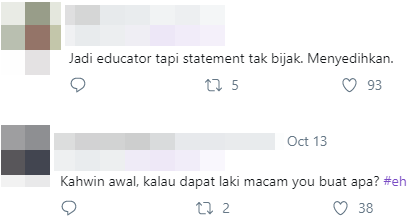 On the other hand, another person shared that she has no problem being an old maid who has money to spend on anything she likes. Yass, gurl, das the attitude!

One more netizen revealed that at 32 years old, she’s pursuing a Masters, and she doesn’t give a hoot about being called an old maid. You go, girl!

I really hope the guy actually realises the problem with his tweet and change his attitude towards life… as well as women. #FingersCrossed

That said, to women who are pursuing their higher education, whether it’s Masters or PhD, I want to stress that no matter what the society says, just remember: You’re doing amazing, sweetie!

Also read: International Influencer Calls Local Singer Out On Twitter For Sexist Comments, Tells Her To Cover Up 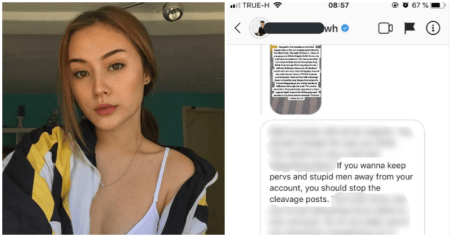