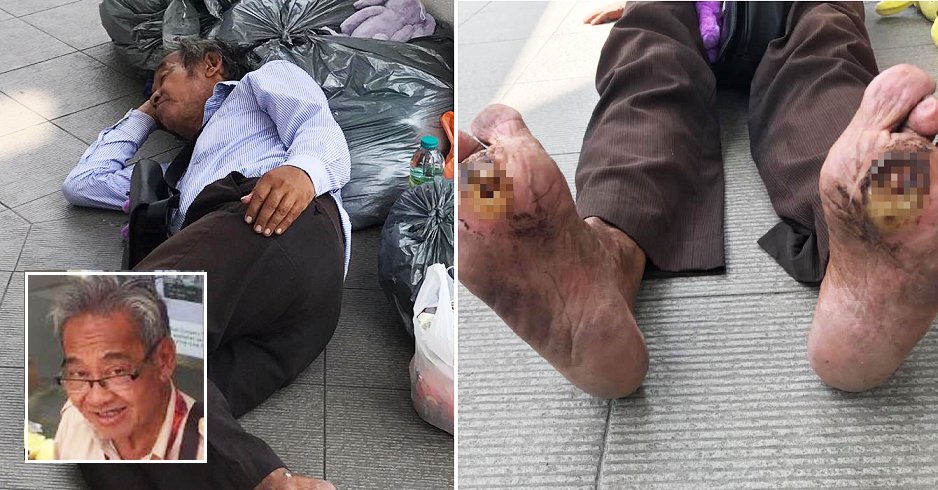 Do you remember Uncle David, the “Soft Toy” uncle who became super viral on social media about two years ago and then again, last year?

I’m sure you remember him – he was the one selling all those extremely cute plushies outside the HSBC branch in Damansara Uptown. He even had those cuddly Pokémon soft toys when the Pokémon Go craze was all the rage! 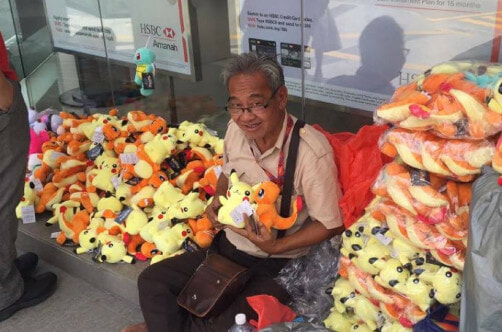 His backstory was a heartbreaking one, but he persevered through life’s hardships to raise his son single-handedly, after his Filipino wife absconded with his money and he was diagnosed with cancer. While there hasn’t been much news about him, a recent post by a concerned netizen has provided us with some updates about the resilient man.

Kyan Ng wrote that he went to the HSBC branch in Uptown Damansara and saw Uncle David there, but there was something different about him.

He said, “Today, I realised something different than usual. It was Uncle David’s legs. I saw him using his hands to support his movements and I asked him why he was doing that. That was when he showed me his legs. He can’t even walk properly and needs people to support him when he wants to go to the toilet. The moment I saw this, I can’t imagine how tough it must be for him to go back and forth while still promoting the dolls to support his living.”

Kyan tried to persuade Uncle David to visit the hospital but he refused to do so. Thus, the caring young man promised to bring a friend over to visit him tomorrow to clean his wounds and avoid further infection. 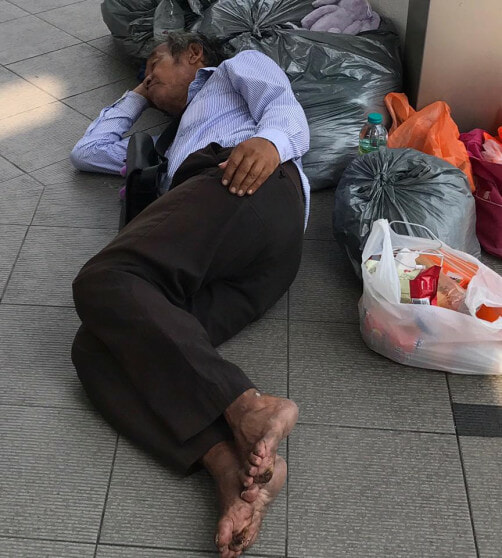 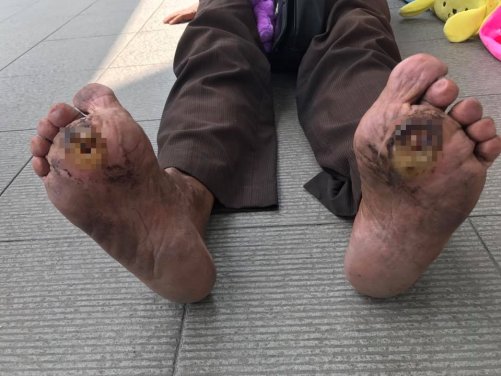 Other netizens also voiced out their concerns and wanted to help him. They speculated that his wounds may be caused by diabetes and that he was afraid that the doctors would force him to amputate his legs.

But just a few hours ago, Justin Cheah, the project director of Kechara Soup Kitchen posted an update about Uncle David.

“Uncle David actually has a house in Pandan Indah which he bought with his EPF money and rented out a room. He wishes to be independent so he sells toys. He was diagnosed with leukemia and his check-up is next month at a hospital in Pandan Mewah. His health stats are currently unknown.” 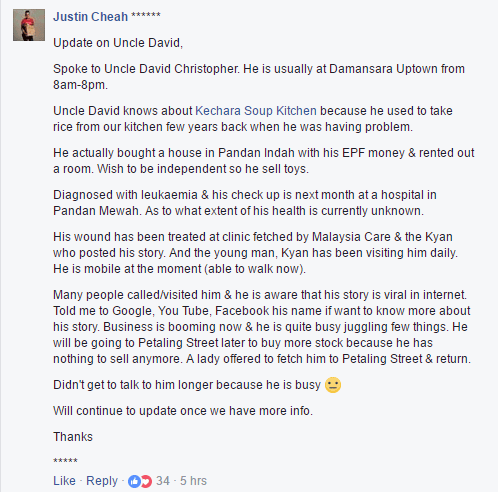 “His wounds have been treated at a clinic thanks to Malaysia Care and Kyan, who posted his story. And the young man, Kyan has been visiting him daily. He is mobile at the moment (able to walk now). Many people called or visited him and he is aware that his story is viral on the internet. Told me to Google, YouTube and Facebook his name if (I) want to know more about his story. (His) business is booming now and he is quite busy juggling a few things. He will be going to Petaling Street later to buy more stock because he has nothing to sell anymore. A lady offered to fetch him to and from Petaling Street.”

It’s almost heartbreaking to see how an elderly man like him would put through all the hardships to earn an honest living. We hope he recovers soon.

If you guys wish to help him out, he often sells his toys in Uptown Damansara, outside HSBC bank starting from 11am.

Also read: Soft Toy Uncle Shares His Life’s Story and It Will Absolutely Break Your Heart 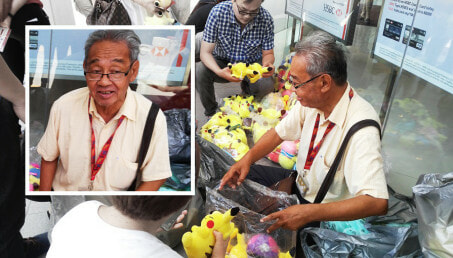