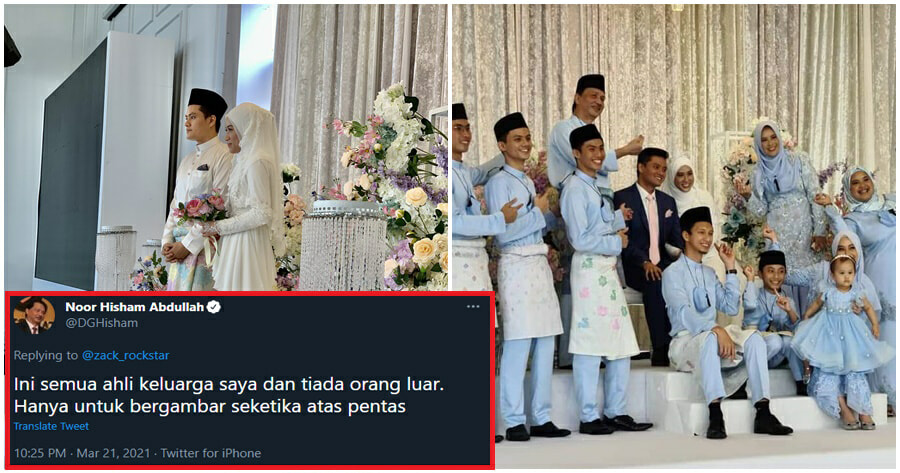 Many politicians and public figures have been scrutinised by netizens for not abiding by the SOPs lately, especially since these leaders are supposedly meant to enforce the SOPs themselves. The latest suspect in question is Health Director-General, Dr Noor Hisham who was recently pictured with a group of people at what appears to be his daughter’s wedding reception in Putrajaya.

In the pictures that have since gone viral on social media, a few netizens pointed out how it seemed as though SOPs were not enforced during the wedding reception as the guests pictured did not appear to be wearing masks or adhering to the one-metre physical distancing rule.

One Twitter user by the name of, Zack (@zack_rockstar), congratulated the Health-Director General on Twitter and took the opportunity to tag Dr Noor Hisham and ask why it looked like no SOPs were being practiced.

Soon enough, the Health Director-General replied in the thread to clarify the situation saying that, “it’s just my family members and there are no outsiders. This was just for a photo that was taken for a short while onstage.” 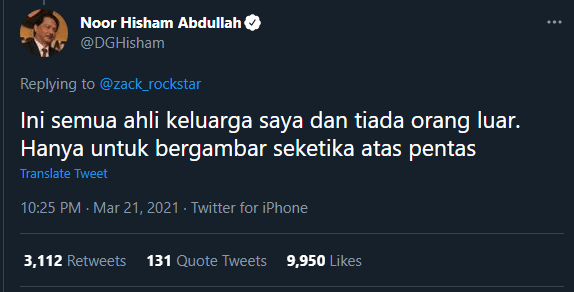 A few netizens pointed out how SOPs needed to be followed regardless:

“That is unfair, even families also need to follow the SOPs because DG is the country’s icon. Many don’t know that this is your family, DG. It gives a negative perception to others who want to get married as well.”

“Have you guys read his explanation or not? Or you just chose to only look at the picture? Typical Malaysians are like that. But that’s the majority of Malaysians’ mentality so we have to change this way of thinking. If you want to post photos, post them of you all following the SOPs. He’s a national icon. It’s not like he doesn’t know what that means.” 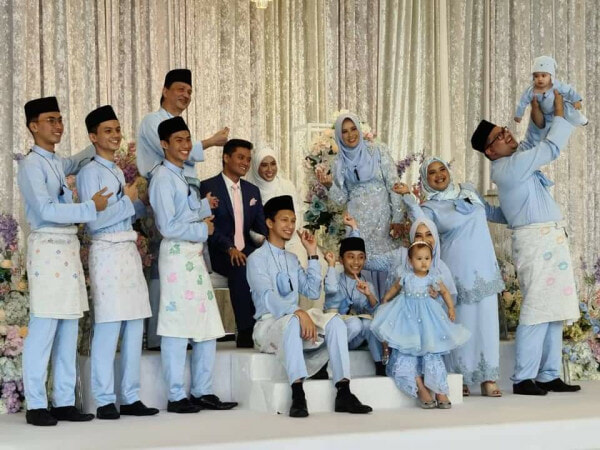 However, a large majority of netizens defended the Health DG:

“It can’t be that every wedding photo kept in the album will just show all of you wearing masks. Of course, there needs to be at least one photo to show everyone smiling. It only happens once in a lifetime!”

TV personality, Fedtri Yahya, who was a host at the wedding also replied to the pictures and confirmed that the reception was only attended by relatives who abided by the SOPs. “They didn’t even invite all of their family members. Just 90% of the family were invited.”

Speaking with the Twitter user, Zack, who posed the question to Dr Noor Hisham, he told WORLD OF BUZZ that he wanted the DG’s reply to be used as an example case that normal members of the public who wanted to organise weddings could refer to.

As many of us know, the issue of double standards when it comes to ministers, MPs, or national leaders and their adherence to SOPs has been a common theme throughout the MCO. Previously, a 17-year-old was issued an RM10,000 fine when he forgot to scan the QR code for MySejahtera as he was rushing to buy medicine and get home to attend to his sick mother.

Earlier last year, Dr Noor Hisham said that “there are only three things which must be done which are social distancing, wearing masks and cleaning the hands often with soap or sanitiser,” adding that wearing masks can reduce the infectivity rate of Covid-19 buy up to 60%. 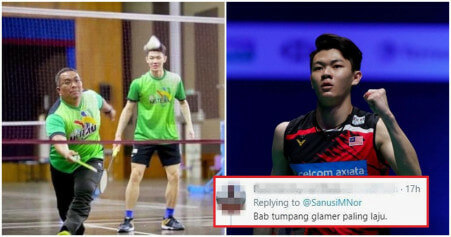