An Air China plane that departed from Hong Kong for Dalian yesterday night (10 July) reportedly dropped 25,000 feet in 10 minutes due to a loss of cabin pressure, The Star reported.

Based on the tracking website FlightRadar24, 30 minutes after taking off from Hong Kong International Airport, the Boeing 737 started descending at 7.40pm between Shantou and Xiamen.

Aviation company Flight Aware confirmed similar findings, which indicated that the plane had an initial drop of 14,100 feet in four and a half minutes, from 35,000 feet to about 10,000 feet, before climbing to cruising altitude.

According to South China Morning Post, the sudden drop in altitude triggered the release of oxygen masks from the cabin ceiling.

One post on Weibo said: “The announcement from the cockpit said the ability to increase oxygen in the cabin malfunctioned so the plane lost pressure.”

The Weibo user even posted a picture of himself wearing an oxygen mask and posing with a thumbs-up sign, assuring netizens not to worry as he said the issue was resolved while the plane approached Xiamen.

The plane then continued to Dalian successfully with no reports of injuries. What a relief!

A professional pilot with more than 25 years of experience explained that any decrease in cabin pressure would prompt the pilots to descend to 10,000 feet.

“That is what is considered a safe, breathable atmosphere for the passengers, and then the captain has to make a decision.”

“I would say in just about every case, you would want to land as soon as possible. But it depends on what happens in the plane and what the pilots’ checklist says.”

Phew, what an experience! We are so glad that everyone on board is safe. Have you ever had any scary experiences while flying? Share with us in the comments below!

Also read: AirAsia Passengers Thought They Were About to Die When Plane Plunged 20,000 Feet 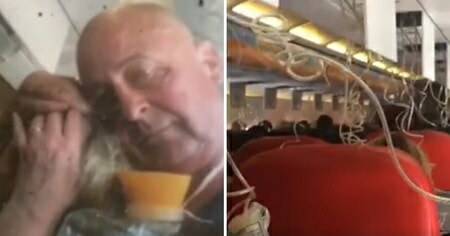