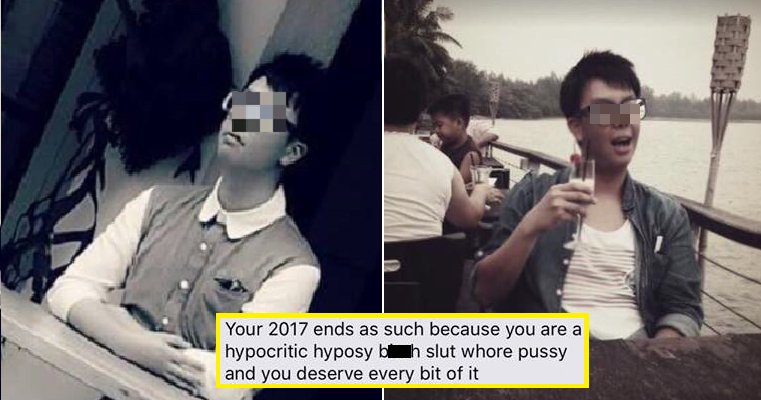 Meeting new people and setting up potential dates have never been easier in this day and age, but not everyone you meet online is a cool person so, better be careful! 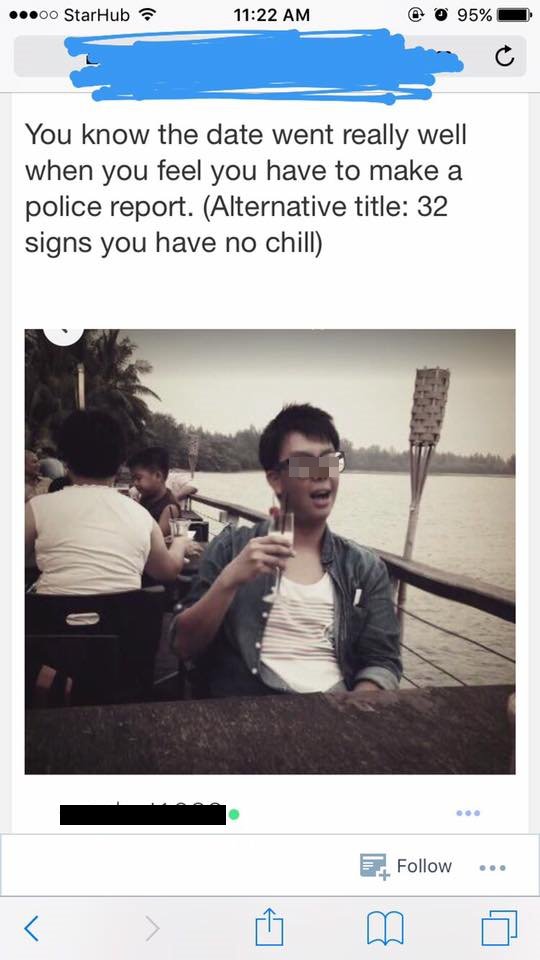 This Singaporean girl recently shared on Facebook about a guy she called a “psychotic creep” and warned other girls not to befriend him. She said that her girlfriend had met him on Tinder and went on one lunch date on December 30, 2017 but as they did not click, her friend had civilly and politely rejected him. Seems fine right?

Well, apparently he did not take the rejection well and started going all crazy on her by insulting her and her family. In fact, the girl said that he even threatened to go to her friend’s workplace to lodge a complaint about her. Didn’t know that you could lodge a complaint for rejection! The girl involved then blocked him on WhatsApp but he didn’t give up and continued to harass her via SMS.

Here are some screenshots of their conversation: 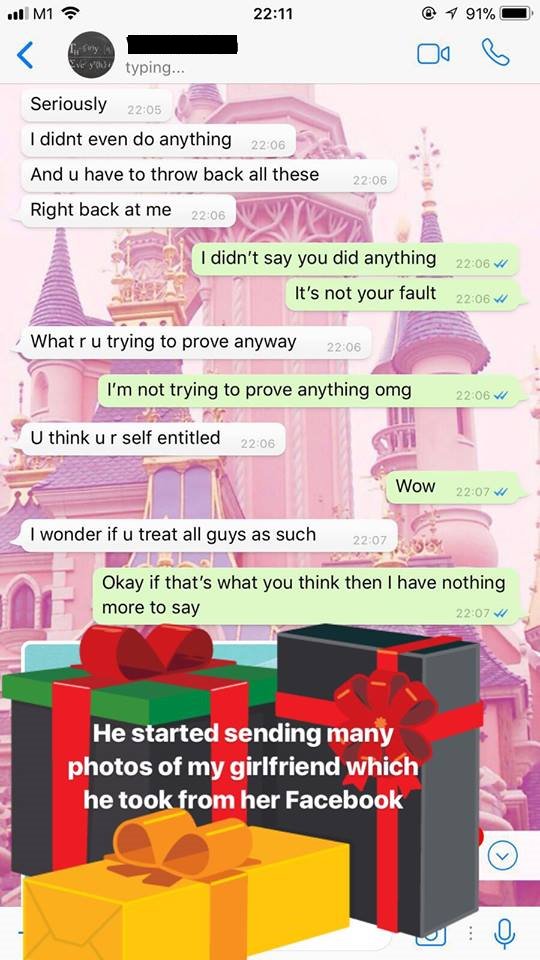 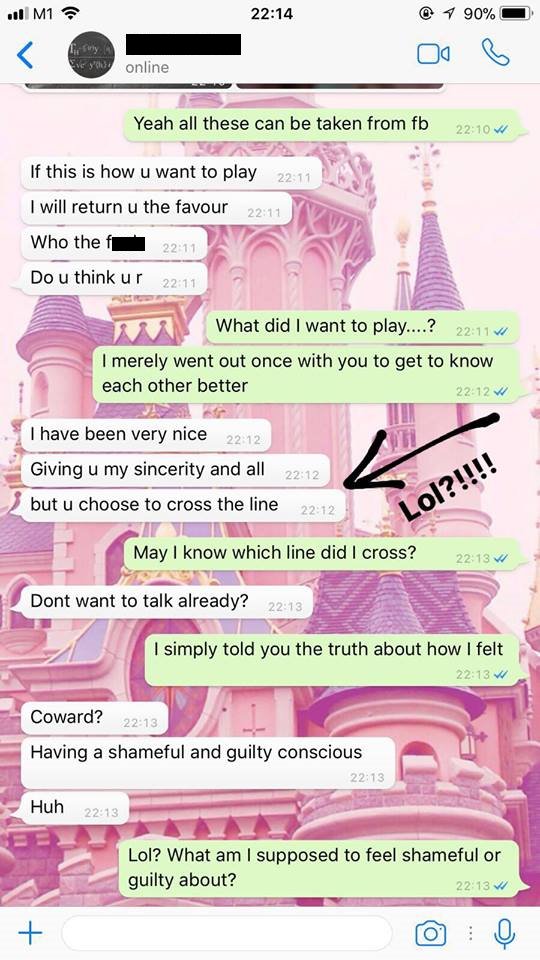 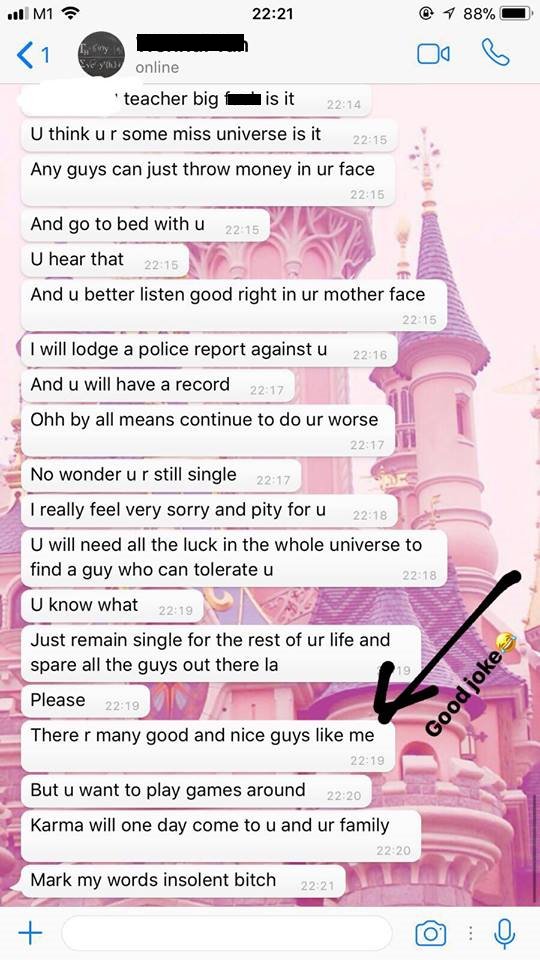 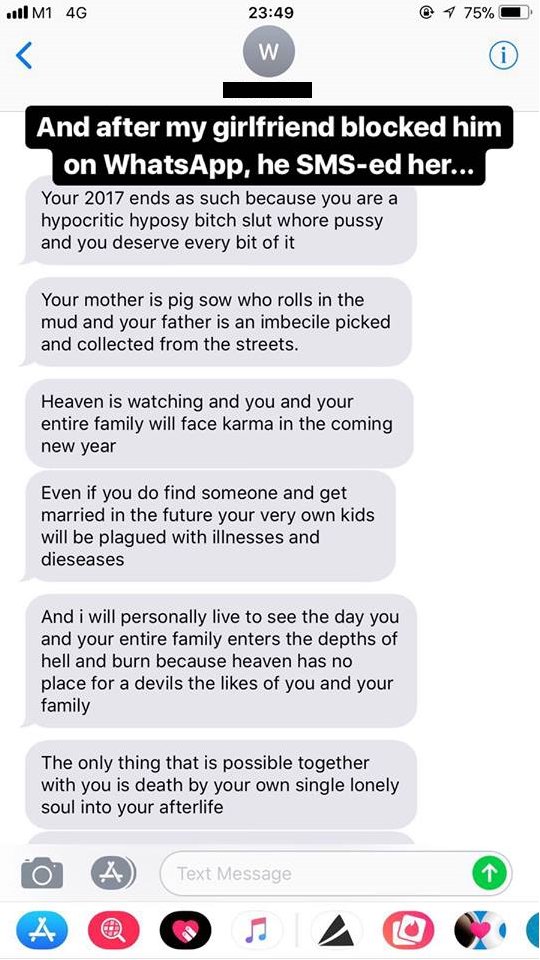 She said, “A police report has been made against him, with their WhatsApp conversation submitted as evidence of harassment. While the police aren’t taking action at the moment, what concerns me is that my girlfriend isn’t the only victim. After I shared this incident on my Instagram, to my horror, so many girls came forward and called him out by sharing their horrible experiences with him. They were mostly similar; that he couldn’t handle the rejection and started insulting and threatening women.”

The other screenshots shared by many other women who came forward painted a rather disturbing picture of a guy who wouldn’t take ‘no’ for an answer, even when the women had politely rejected him. He took it very personally and started to threaten them, even saying that he would shame them by posting their photos online. Although he did not have any compromising photos of them!

A few examples of what he said to other girls: 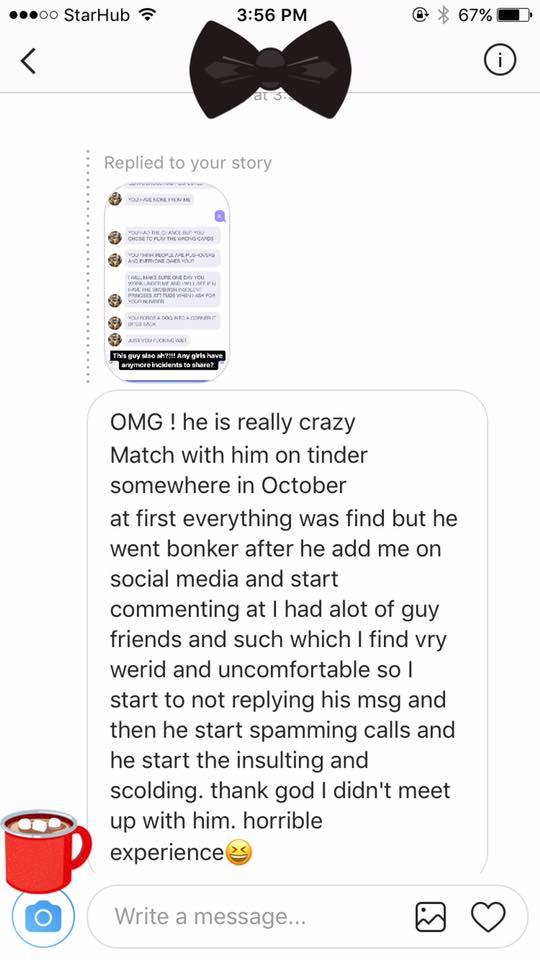 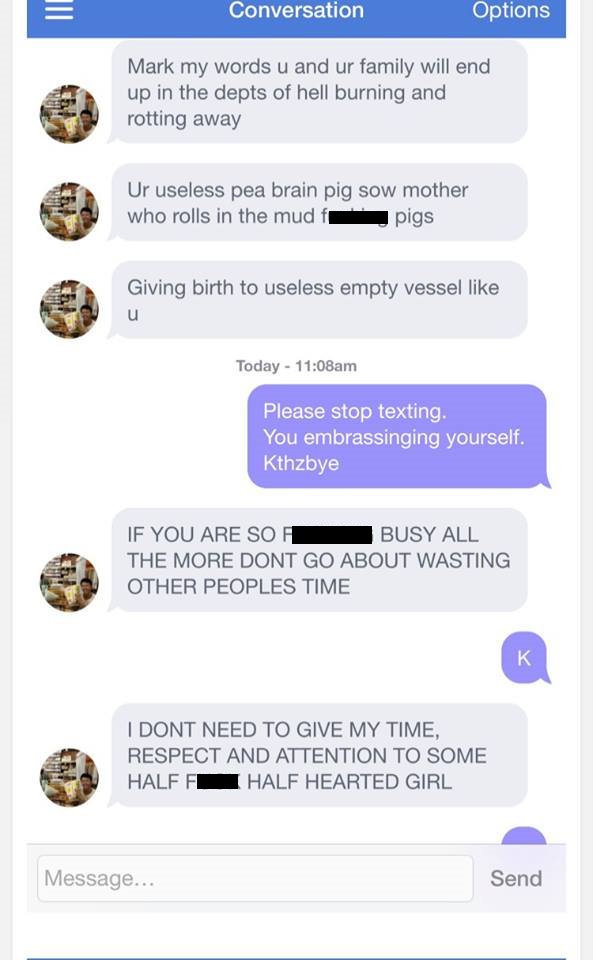 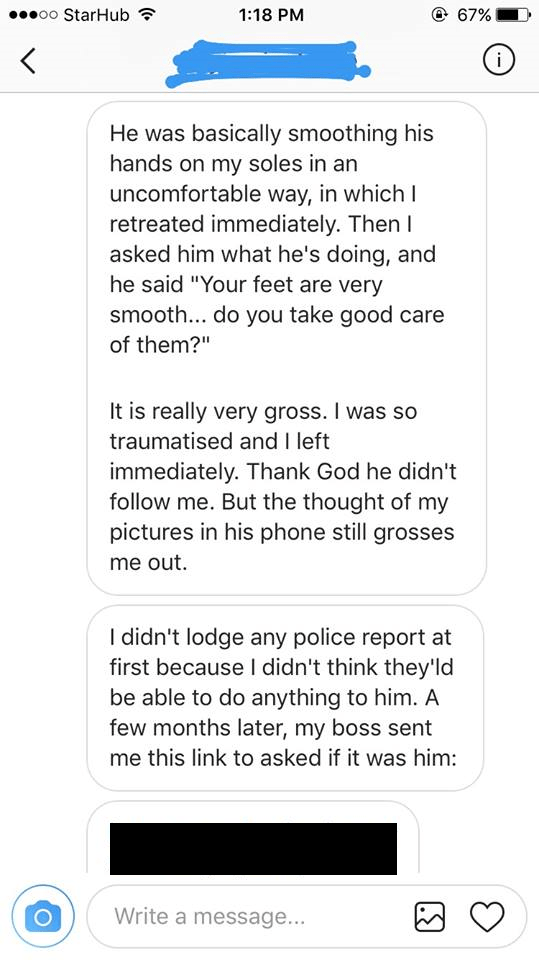 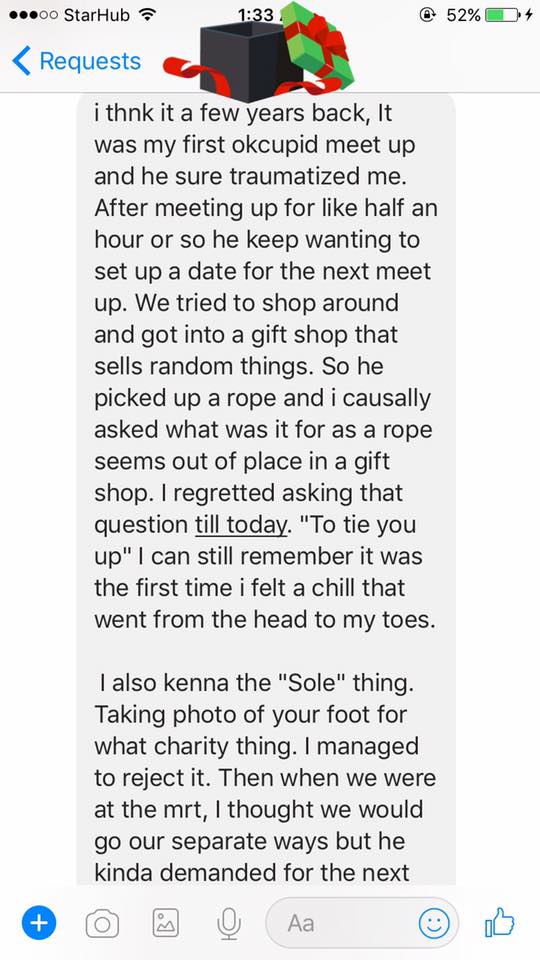 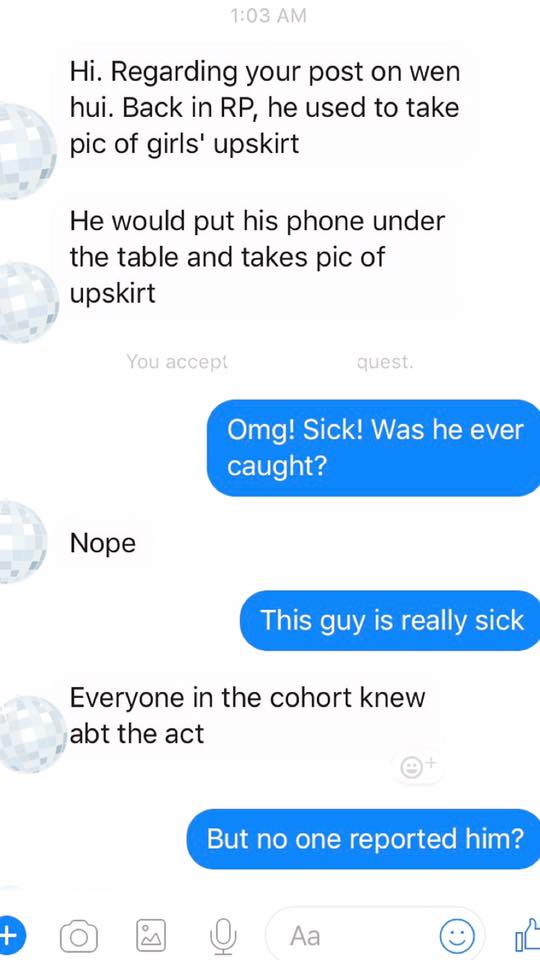 Some of them said they were so scared that they actually feared for their life. There were also a few instances when he made the girls really uncomfortable by persistently asking them to show their feet. He said that he was part of a voluntary initiative called “Bare Your Feet” and “needed to make a collage of people’s soles”. When the girl refused, he caressed her feet and left her feeling very disgusted.

She added, “I want all of you, men and women alike, to know that no one needs to cower to such bullying. Men may view women as sexual objects but we have our pride and we deserve the same respect as a person. Not all men are like that, though. Believe that there are good men out there and if one man doesn’t appreciate you, move on. Do not settle.” Wise words!

Remember girls, do not tolerate such awful behaviour and always be careful when you meet someone online! If you want to know the guy’s name, click here.

Also read: Man Exposed for 5-Timing a Girl With 3 Other Women and 1 Man 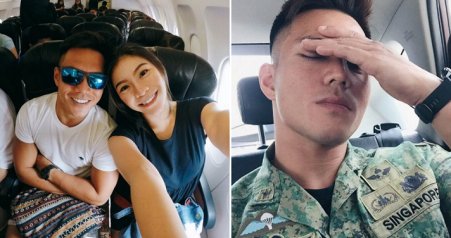