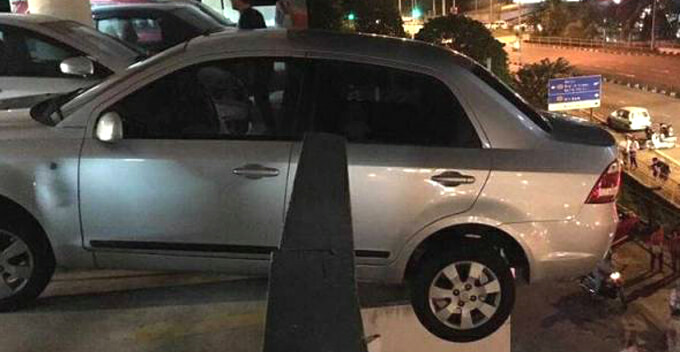 Reccently, a woman had a near-death experience when she accidentally engaged the wrong gear as this caused her car to get stuck on a ledge. This incident happened in Georgetown, Penang at around 7.30pm. 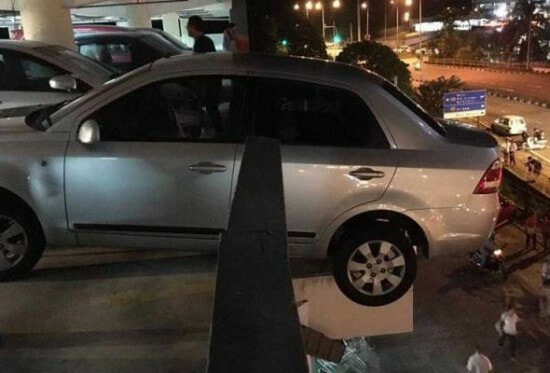 According to Sinchew and Astro Awani, the woman had just finished her grocery shopping at the Econsave hypermarket and got into her silver Proton Saga. It was believed that she had accidentally shifted the gear into reverse, which resulted in the car ramming through the wall on the second floor of the multi-level car park.

Luckily, the sedan was stuck on the ledge, though the rear half of the car was hanging in the air. The crumbled wall had fallen onto the road hitting two motorcycles that were parked down there, shocking many passersby.

When the fire department arrived at the scene 15 minutes later, they found a shaken woman in her 30s sitting in the driver seat. She wasn’t physically injured but was traumatised nonetheless. Who wouldn’t?!

The firemen attached two straps to the front of the Proton to their truck to prevent it from falling backwards. Despite the truck giving its full power, the sedan wasn’t moving much as the body weight of the car was lying on the ledge. After 15 minutes and several firemen putting their back into it, the car was finally pulled up at 8.30pm. The woman was sent to the Penang Hospital due to breathing difficulty as a result of the trauma.

We’re glad that no one was injured in this incident and that the operation went smoothly. So guys, pay attention when you’re shifting gears! 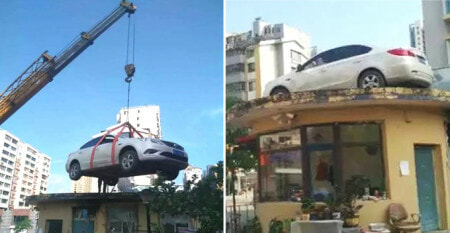