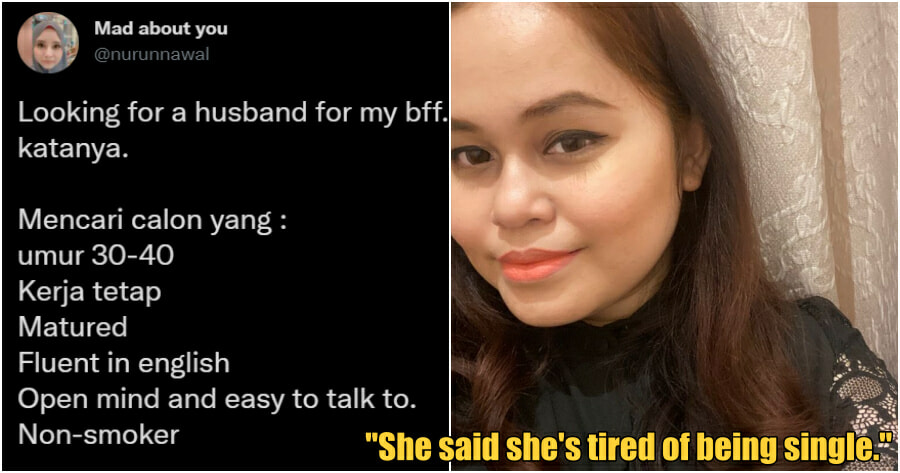 Probably the best wing woman we’ve ever heard of…

The pandemic has undoubtedly put a wrench in the dating scene leading to many singles being unable to meet and connect with other singles.

However, one Malaysian woman, Nurul Baiti decided to buck the trend by asking her best friend to advertise herself on Twitter after not having much luck on dating applications.

Her best friend, Nurunnawal Yem then took to Twitter to begin the search via a post that listed the qualities that Baiti was seeking.

Looking for a husband for my bff. Dah penat single katanya.

The main criteria include: aged between 30 to 40, full-time work, matured, fluent in English, open-minded and easy to talk to, a non-smoker and must not be an anti-vaxxer.

Nawal then went on to list some of the qualities that Baiti possessed, mainly: that she is 35-years-old, loves to travel, is fun and easy-going, is the youngest of three siblings, is a big fan of Manchester United and Formula1 and was born and currently resides in Shah Alam.

As her post had gained quite a bit of attention, Nawal said that she was amazed by the huge number of positive responses that she had received from netizens with many potential suitors messaging Nawal wanting to get to know Baiti.

According to Nawal, the reason why she chose to ‘advertise’ Baiti on Twitter was due to the fact that people on Twitter are much more honest compared to other social media and dating applications.

Speaking to WORLD OF BUZZ, Baiti said that she was inspired by Nawal’s love story. She had gotten to know her partner via Twitter many years ago and is now happily married with four kids.

“I trust my best friend and I think she know what’s the best for me. She filters the candidates before she shares my personal details with them.”

Baiti also said that the progress so far is good and that her Twitter DMs have been flooded with messages, “which has never happened before,” she said jokingly. 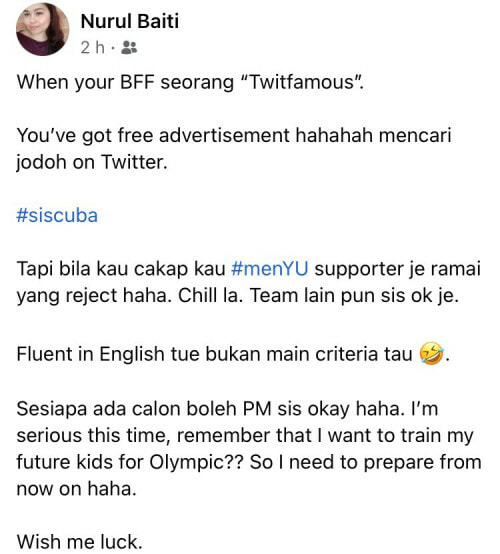 She further explained that dating in the midst of a pandemic is a challenge, especially for someone like her who is not too active on social media and prefers face to face interactions.

“I find it a little challenging to find someone new. But where there’s a will, there will surely be a way.”

“In my case, I let my best friend do it for me. But I think in most cases, going online is the most practical way to get socially connected and to meet new people,” she added.

On whether or not more Malaysians should follow what she’s done, Baiti says, “Of course, go for it. If you don’t give it a try you will never know. Especially during the pandemic with limits on our social lives, we need to be creative!”

Nawal’s post currently sits on 750 likes and over 300 shares along with a number of comments from netizens. Some touched upon her list of criteria whilst others tagged their friends or even themselves.

One user asked if they could screenshot the list of criteria to give to their friend.

This user asked if the ability to speak Mandarin is considered an add-on. To which Nawal replied, “that’s a bonus.” 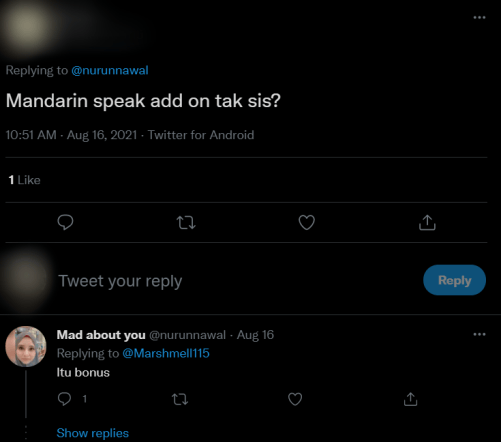 Another user said that they have a friend to recommend who is an expat, Muslim, and adventurous. “How do we introduce them? How to even start,” to which Nawal replied to asking for the user to DM her. 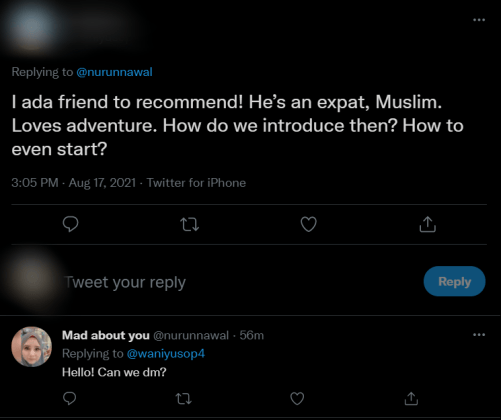 Her tweet was even retweeted by Kangar MP, Noor Amin Ahmad who said, ‘Today I don’t want to talk politics, instead I want to forward this”.

We are wishing and rooting for Baiti to find her soulmate. To anyone who is searching for a partner, maybe give Twitter a go?

Also read: Indonesian Man Gets Rejected After Travelling 236km For Woman He Met On Mobile Legends 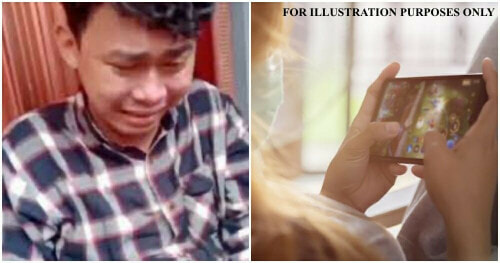