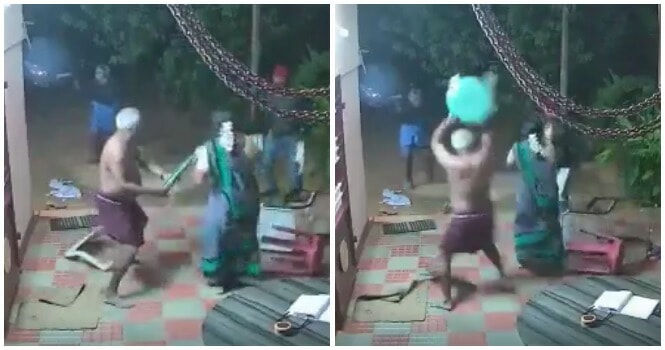 Usually when thieves plan to steal from somebody’s house, they expect the victims to cower in fear. But not this uncle and aunty.

Two thieves tried to rob this elderly couples’ house in Tirunelveli, Tamil Nadu, India on 12th August (Monday). According to NDTV, the uncle is 70 years old while his wife is 65 years old. The whole incident was recorded by the CCTV that was installed in their house.

In the video, a masked thief slowly sneaked out from the bushes behind the uncle while he was resting on a chair at the porch of his house.

Suddenly, the thief tried to choke the uncle by pulling a cloth around his neck. The uncle’s wife came out of the house at the same moment to check what was happening.

Immediately, she threw a slipper at the first robber while another masked robber approached them. The uncle managed to kick one of the robbers.

The uncle and aunty continued to throw chairs and a pail at the thieves. Then, the thieves tried to scare the couple away with their parang, but it didn’t work.

In true Kollywood fashion, the uncle hit one of the thieves with a plastic chair and the chair smashed into absolute pieces.

Finally, the uncle and aunty succeeded in chasing the thieves away with their sheer bravery.

According to NDTV, the thieves managed to snatch the aunty’s gold chain in the incident and a police report was made.

Sometimes, people are able to defend themselves in dangerous situations like this. Unfortunately, these types of situations could go really badly too. Luckily, the uncle and aunty were not seriously hurt in this incident.

Also read: Snatch Thief Brutally Kicked and Hit with Chairs by the Public In Sarawak Before Police Arrive 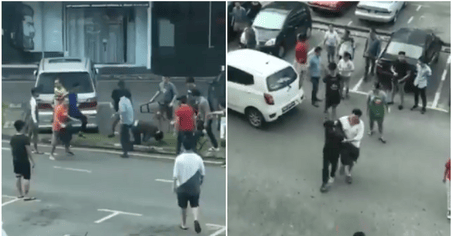