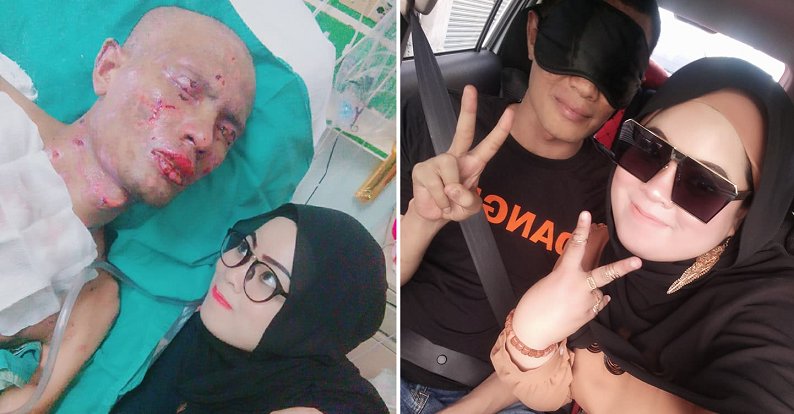 Typically, people look forward to a sweet and happy married life. However, for Hamdan Hashim, 30, and Nurr Hidayah Hassan, 29, their 3 years of marriage has been met with some pretty tough times.

It all began in early 2017 when Hamdan worked in a clothing factory warehouse in Malacca. Hidayah detailed the painful journey which Hamdan went through to the press. 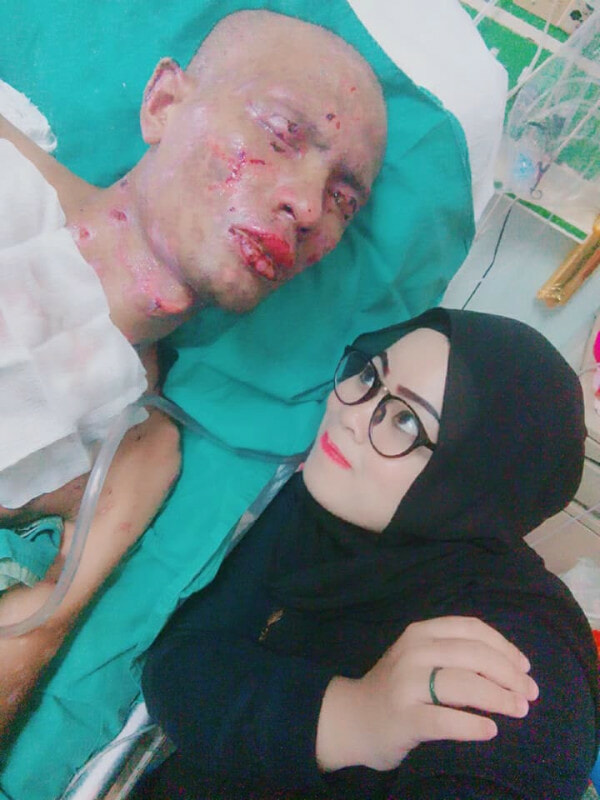 “In the beginning, when he started working at the clothing factory warehouse, my husband’s eye started to hurt. He went to the clinic to get treatment. The doctor gave an eye medication and pills to relieve my husband’s pain. However, less than 24 hours pass and my husband’s mouth and eyes swelled up.

“I brought him to the Melaka hospital to receive treatment.” 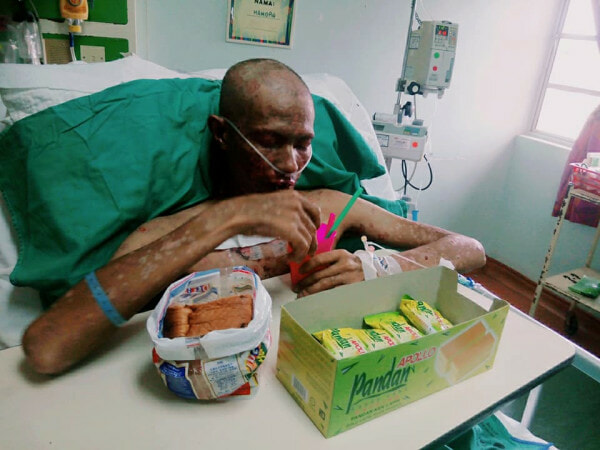 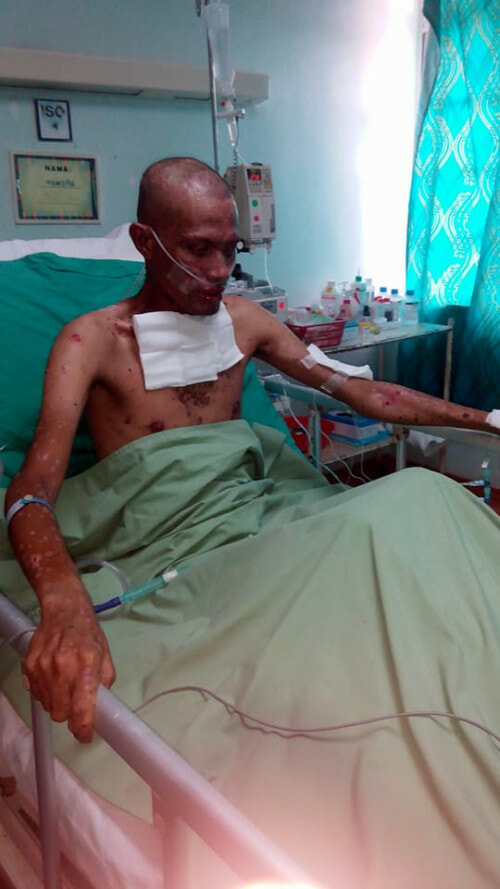 Doctors believed he was suffering from chicken pox and so they prescribed him with antibiotics. Unfortunately, that made things much worse.

“After eating the antibiotics, his condition worsened as his skin started blistering and seemed to be bleeding terribly.

“He went into the ICU for about a month. It saddened me to see him in that condition but as his wife, I must be strong.” 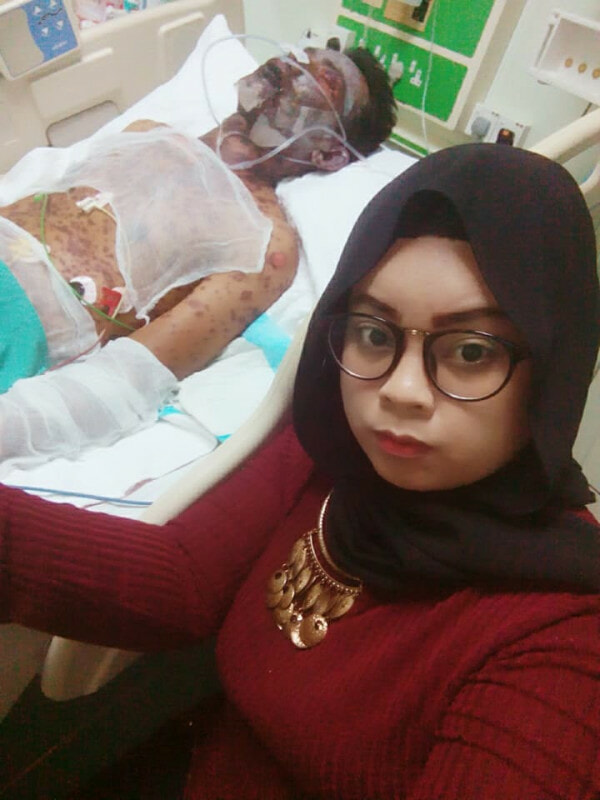 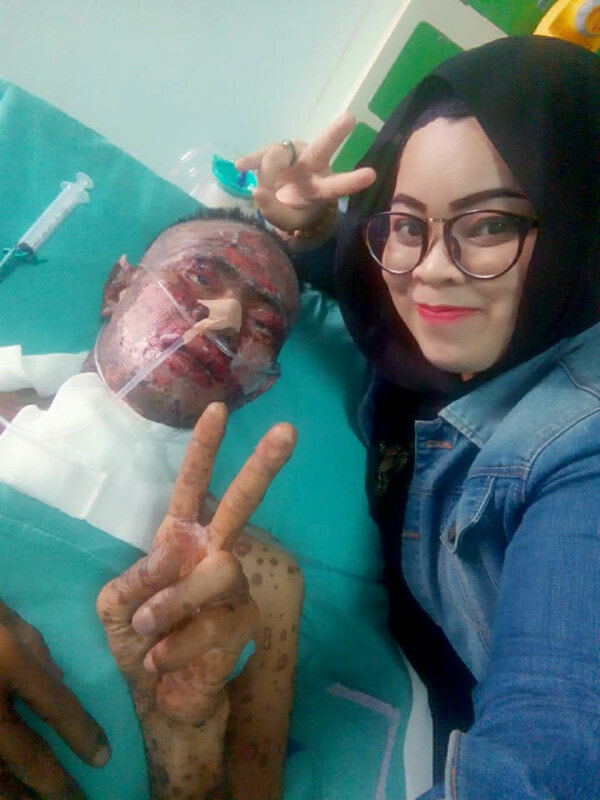 The couple who lived with the wife’s grandmother in Kampung Morten worked part-time online just to earn some income while her poor husband was in the hospital.

“The doctors tell me that my husband can no longer see life before as his eyes are affected. He can only hear. My husband’s right eye couldn’t be saved as a layer of membrane grew over it, blocking his vision.

Eventually, doctors realised what was wrong with him. Turns out, poor Hamdan has the very rare but serious disorder called the Johnson Steven Syndrome. This skin disorder is usually a reaction to medication or infection. 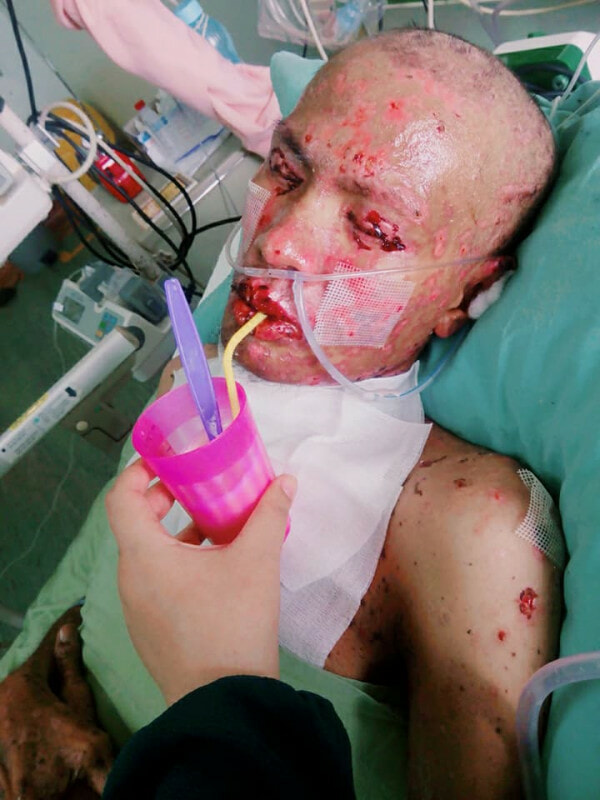 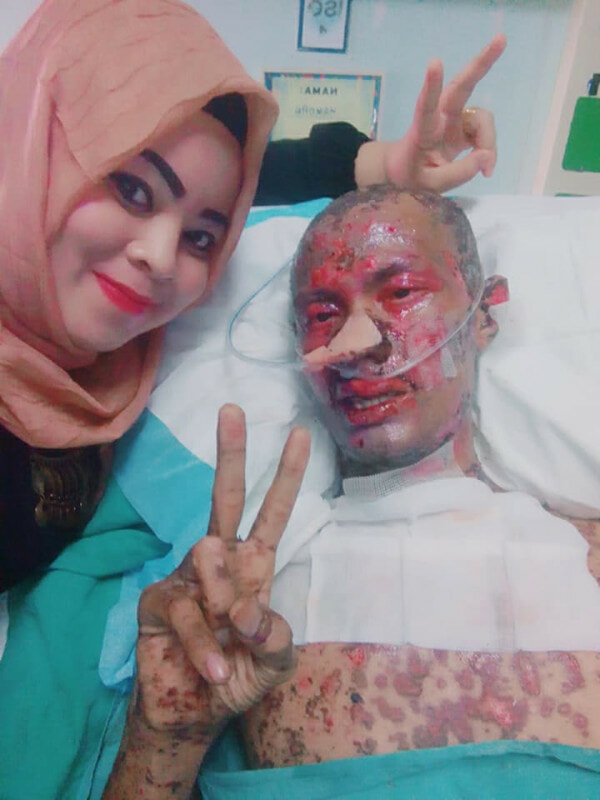 Usually, it starts with flu-like symptoms but then turns into excruciating red or purplish rash that spreads over the body and blisters.

As if the physical and emotional suffering that this couple is going through isn’t painful enough, heartless netizens just had to add salt to the wound.

When pictures of Hamdan went viral on Facebook, netizens commented horribly mean things about Hamdan’s condition and appearance, and even told Hidayah to just leave the man and marry someone else.

Of course, the loving wife was adamant about staying by her husband’s side.

“There were people who told me to just get a divorce and all sorts. I love my husband and I will take care of him for the rest of my life. I will be with him through thick and thin.

“And I will do my best to find a way to cure him.”

Thankfully, Hamdan’s condition has improved and he has been at home for a while now. There were many kind people too whom offered to help by channeling some funds to the couple. 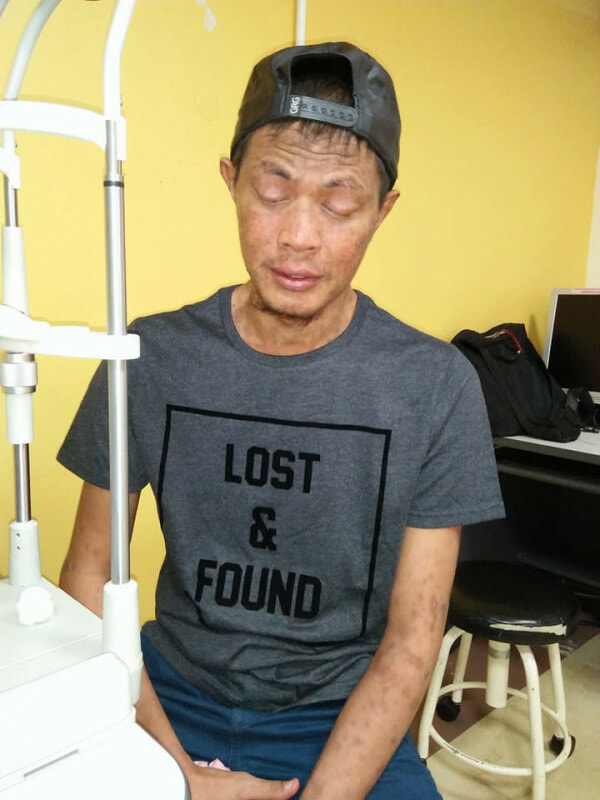 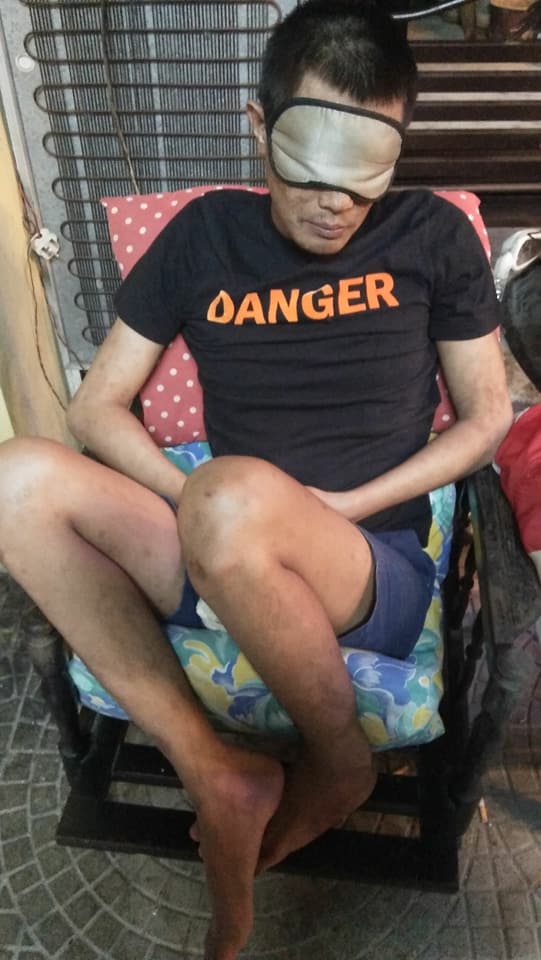 If anyone is interested in giving a bit of financial aid to this lovely husband and wife, you can transfer the money into Hamdan’s account.

Details as per below:

Hopefully Hamdan’s condition improves more and may Hidayah stay strong throughout this ordeal. 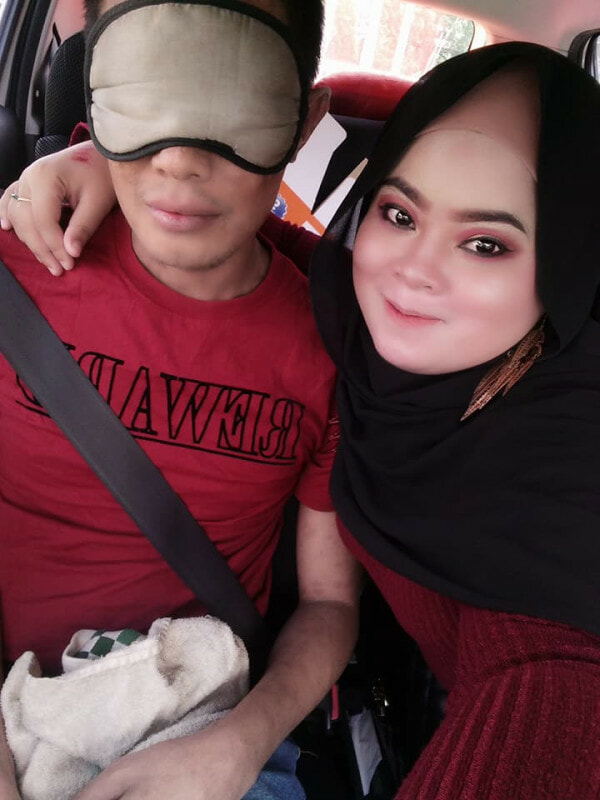 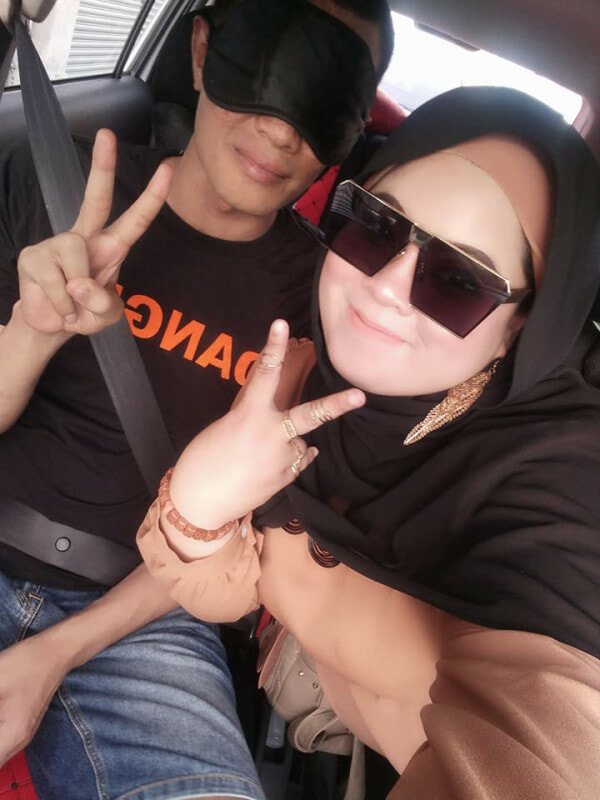 If this couple’s story isn’t true love, I don’t know what is. Tag your bae in the comment section and share the love with them.