While Malaysia is a developing country, unfortunately some of our countrymen still possess the third world mentality.

When taking trains, rush hour is one of the most hectic times with many commuters rushing to board their respective rides. Yet, female commuters have another thing they need to be aware of, the fear of sexual harassment. Yes, men might get harassed too but the majority are women!

Sometimes, most of us females might choose to keep silent when we are faced with such situations but this shouldn’t be the way. You’re letting the perpetrator go free! A Malaysian girl, Elycia Sang who recently experienced sexual harassment on board one of Prasarana’s transport shared her experience and encouraged other females to lodge a report, just like she did. What in inspiration.

She lodged a report with Prasarana and the Royal Malaysian Police, and urged other people to come forth should they ever have the misfortune of falling prey to such situations. You may think that it doesn’t help much but Elycia said that Prasarana takes these complaints so seriously that they even have a Special Action Team (SAT) to handle any crime that happens in their transport system.

These are a few tips she learnt when she lodged a report. So if you or your friend is ever in such a situation, this is what you should do:

2. Take note of some key information before lodging a report so that the SAT can catch the perpetrator easily. Capture photos, videos and things such as train/bus number, time and the location of the harassment.

However, Elycia also notes that we tend to keep silent as a society even though we could have done something. She criticises our society for encouraging rape culture.

She explains, “The ugly truth is our society is just as flawed and guilty of embracing rape culture.You don’t have to be a rapist to embrace rape culture.

You perpetuate rape culture when you victim blame and impose the weight of the consequences on the victim. If you are guilty of victim blaming, you are missing the whole point.”

“You embrace rape culture when you invalidate and discredit a victim’s experience. Sexual harassments can be as explicit as verbal and physical. It can also be as subtle as winking, leering and showing facial expressions. Either way, it is an outward projection of the perpetrators’ offensive sexual intentions and should be equally condemned regardless the form of harassment.”

She encourages bystanders to do something and says, “We can all do this by not letting the bystander effect get the better of us. We need to practice empathy and stop outsourcing the problem to somebody else. I broke my silence. You have a voice, and you can use it too. It’s time we take ownership of our voice, our confidence and our right to feel safe.”

In December 2017, Prasarana has actually caught 21 out of 22 suspects that were reported to them.

She’s right, you know! Don’t accept injustice like that in silence. Report or help someone if you happen to see any incidents!

Share it to a friend to spread the message!

Also read: Pervert Who Said “Can I Hisap You?” To Female LRT Passenger Successfully Apprehended 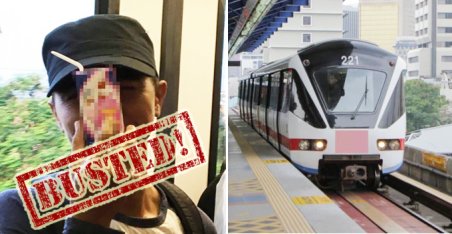