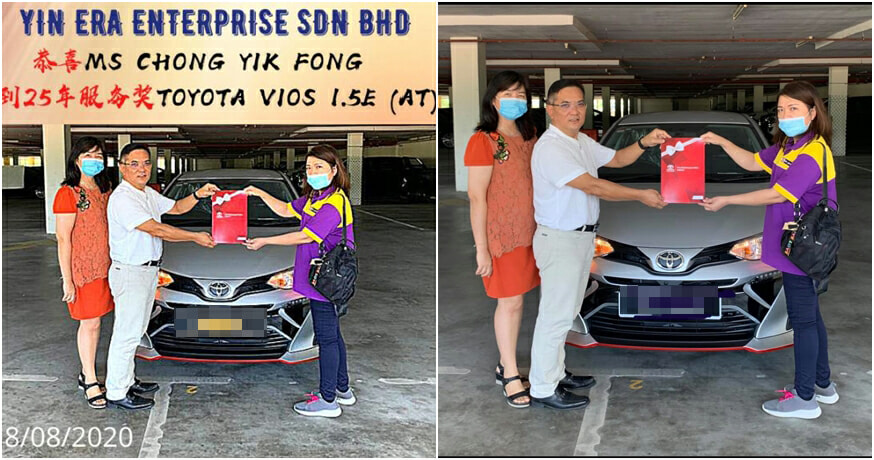 Loyalty benefits are perks offered by a company to employees who are willing to stay with them through thick and thin, seeing their business through both the good and the bad. Often times, these loyalty rewards come in the form of a lump-sum cash payout, or in some cases, it can be something incredibly meaningful and pretty expensive, like a commemorative watch.

But the bar for loyalty benefits has now officially been raised a few notches higher, after a local Malaysian company went viral over social media when they shared how they had bought a loyal employee a brand new car as a reward for her efforts! Damn jealous man.

The company, Yin Era Enterprise Sdn Bhd, which sells office supplies to corporate clients, gifted the lucky female employee a new Toyota Vios E Automatic, which retails at over RM80,074, for her hard work and dedication to their business for over 25 years. Having been with the company since 1995, the owners of Yin Era said that they were eternally grateful for her continued dedication in helping their business grow over the decades.

In their Facebook post, the owners of the company thanked Ms Chong Yik Fong for her contributions, and said they had wanted to gift her what they feel she had rightfully deserved after all these years.

The owners also added that they hope that Ms Chong will continue to strive to greater heights with them in the years ahead, and build upon their successes together in their business.

We would like to take this opportunity to congratulate Ms Chong on her incredible achievement, and hope that her new car will serve her well! But also brb, we’re going to email this story to our boss also ah.

M’sia Could Reach 5,000 Cases Daily By End Of May If Infectivity Rate Doesn’t Go Down

The Ministry of Health (KKM) has predicted that Malaysia could hit 5,000 Covid-19 cases daily if there continues to be...