Since the presence of UBER and GRAB in Malaysia, taxi drivers had their reputation tarnished by thuggish cabbies who tried to terrorize the e-hailing apps from entering the Malaysian transportation industry.

However, many forget that one rotten apple does not actually spoil the whole lot and there are many other decent and humble cab drivers out there.

Recently, Jason Ling from Miri shared his story on Facebook, explaining how his taxi experience was probably the best one he ever had. It wasn’t because the ride was particularly pleasing, but the character of the taxi driver himself!

“I just want to give a great acknowledgement to this awesome and honest taxi driver.” Jason starts his post.

He tells how he had carelessly left his phone in the taxi, but unlike most cases where your phone can be considered gone forever, Jason was able to retrieve his smartphone back!

“I mistakenly left my iPhone 6 in his cab after he sent me to my home from airport… Less than an hour later, he personally came back and sent it back to me at my doorstep!!”

Understandably ecstatic about his experience, he continues, “Praise God for such honest people in Miri!! 100 cheers to uncle!!” 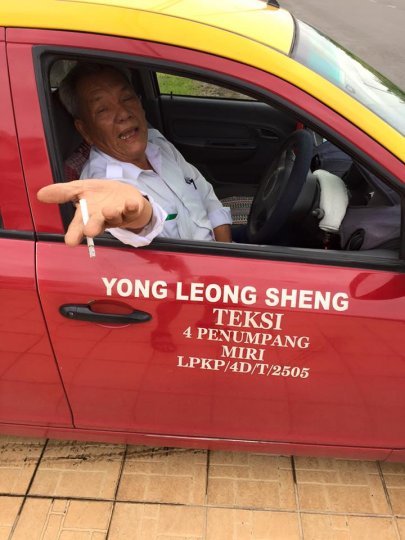 Netizens cannot help but feel the same way as well, as everyone poured their awe for the truthful man.

“We need posts like this and not some rubbish complaints here and there. Positivity makes d world a better place.” another Facebook user wrote.

“He also skip his time from work and the fee of travel as well.. Must be appreciated!” wrote another.

Subsequently, there are many others who requested the Uncle’s number from Jason, so they could take his taxi ride next time! I suppose what goes around really does come back around huh? Karma at its best!

Of course, not forgetting a token of gratitude, Jason tipped the taxi driver RM20 for his honesty. It’s safe to say that the two just made each others’ day. Faith in humanity restored.

Have a story to suggest or share? Drop us a message on Facebook or email us at [email protected] and if we like it, your suggestion/story will be featured in our next article!