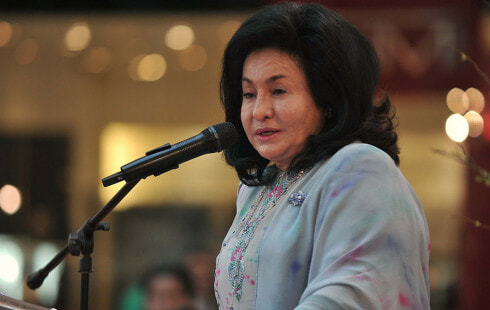 However, during the reign of PM Najib, Rosmah has gathered a reputation as a serial shopper and spender but that’s not even the biggest issue. As Rosmah had not held a steady income job in decades, her only source of income would then be her husband. But how much does he actually earn to afford her taste for luxurious goods?

“She is the only child of school teachers, hasn’t had a regular paying job in years and her husband, Prime Minister Najib Abdul Razak, is a longtime bureaucrat with an annual salary of US$100,000,” reported a source from the Wall Street Journal (WSJ) via Malaysiakini.

Then again, the ever so noble Rosmah did say that she had to give up her career after marrying Najib.

Now, in a recent and rather embarrassing YouTube video, a Korean broadcaster can be seen reporting our first lady using the Malaysian public’s funds for shopping.

The video has since been viewed over 300,000 times and garnered over 500 comments. We’re guessing by many shame-faced Malaysians.

According to a recent claim from the WSJ, Rosmah has allegedly cranked up a whopping USD $6 million (approx. RM24.8 million) on her credit card bills. It was reported that the ungodly sum of cash was spent on clothes, shoes, and jewellery over the period 2008 – 2015. That’s about RM3.5 mil splurged on shopping!

“Newly revealed documents show (Rosmah) has racked up at least US$6 million in credit card charges in recent years – despite having no known source of income beyond her husband’s salary,”

With the recent accusations and the video ridiculing our first lady, many netizens did not hesitate and didn’t hold back their comments.

One wrote, “I’m not ashamed to be Malaysian. Not at all. But to have Najib and his gang as Malaysian ministers, that’s a huge embarrassment.”

Another bluntly commented, “This is the exact example of a leader who’s making the people struggle. Not only Najib but his wife too. Useless!”

With international coverage from the US and South Korea, a Malaysian said that ‘we don’t know where to put our faces anymore’.

You can read here to get an idea about how much the items our fashionable first lady wears cost.

Also read: Rosmah Had To Give Up On Her Dream and Ambition After Marrying Najib