They say you never really know a person. In this case, for 37-year old Grace, it couldn’t be any more true.

In recent reports from the Daily Mail, German man Horst Koenig, 57, has confessed to killing Grace, his Filipino wife of 10 years (both pictured above). But Koenig had not killed his wife in an act of passion, impulse, or an accident. He had actually planned the murder and for a shitty excuse.

Koenig, a computer expert who also conveniently works as a chemical lab assistant revealed to the Augsburg State Court in Bavaria that he had done extensive research prior to carrying out the deed saying, “I had check lists made, I worked it all out.” 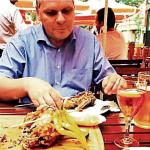 Prosecutors told the court that the victim’s marriage had been nothing but a lie as Koenig has not been faithful throughout those 10 years. And this time, he wanted a sex-fueled holiday uninhibited by his wife, so she would “have to be out of the way”, reported The Sun.

Investigators found that Koenig had leased a warehouse in November last year; where he carried out his research for the impending murder. Koenig struck the victim on the head with a hammer while she was asleep and placed a plastic bag over her head to suffocate her. He then secured the house with industrial strength rubbish sacks and construction foam to seal the windows and doorframes.

Once it was done, Koenig happily skipped to the travel agent offices to purchase his tickets for his sex holiday in Pattaya, Thailand. He then came home, sliced his wife body in 8 parts with a reciprocating saw (you know, the one Dexter uses) and dumped her remains at the warehouse.

Koenig made sure to cover his tracks before he left by sending out an email to friends and family, claiming that Grace has left him and returned to the Philippines ‘but that I will win her back.’ Koenig had also cleared Grace’s bank account for his trip. Meaning to say, she was paying for his fun.

He stayed in Thailand for 3 weeks till his visa ended and his money used up. In Pattaya, he met up with a woman which he met over the internet. He told the court, “What she promised, seemed exciting, and many of my secret desires seemed to come true. I wanted to be with this woman.” Sounds like a sleazy douche bag to me.

He painted the story that his married life was dull to both him and Grace, and that he was just putting an end to their misery.

“This was a person with whom I got distracted with on the Internet from my gloomy daily life. My wife increasingly lived on her mobile phone to the extent that she once burned a pot on the stove,” he told the court. 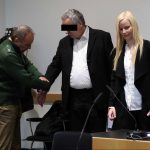 Koenig said he intended to kill himself but couldn’t go through with it.

He was arrested on his return after the police were contacted by Grace’s family. Authorities also found pictures of him and the Asian girl. He currently awaits a sentencing for premeditated murder.

Sadly, this isn’t the first time we hear of a creep. Remember the time a German tourist pretended to be a beggar?

Read more: Scumbag German Begs For Money in Bali Indonesia, But Wait Till You See Him At Night