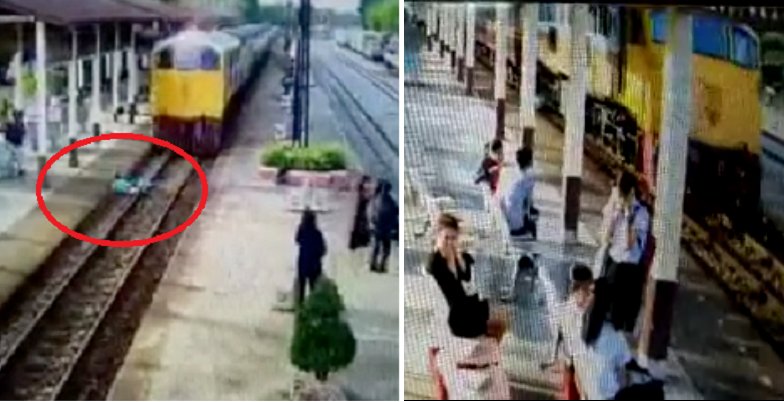 A couple videos recently went super viral with over 32,000 shares as it captured the moment a man from Thailand dove onto the train tracks in a desperate bid for suicide.

The incident happened at Bangkok’s Phetchaburi station yesterday where CCTV footage showed that a man later identified as Wirachai Nisairam, from Buriram, ran out to the train tracks when he saw the train approaching the station.

In the first video, the 23-year-old Wirachai Nisairam who is clad in a green shirt and jeans runs out and lays down on the train tracks as soon as he saw the Thonburi to Prajuab train arriving.

When the people around him realised what he was trying to do, they quickly moved away while other shielded their faces in horror from the seemingly inevitable bloody and gory scene. OMG!

You’d think jumping on the train tracks with an approaching train seems like a surefire way to end one’s life. But miraculously for this Thai man with a suicidal wish, he lived with barely any major injuries.

But here’s the twist!

There is even a comment in Thai from someone watching the clip exclaiming, “That’s incredible!” Police and medics arrived on the scene and found him sitting nearby. Wirachai Nisairam was incoherent and rambling. 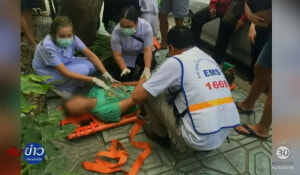 He was sent to the Phra Jorm Klao Hospital for a thorough check and physically, he only had a slight abrasion on his leg and no internal injuries. Instead, the doctors assessed that he is suffering from depression.

Some of the locals said that they had noticed him wandering around a few days ago and had attempted to harm himself. He was often heard muttering that he couldn’t find a job and was stressed out. 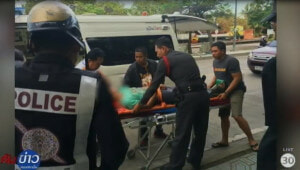 This is nothing short of miraculous as the first video looks like he was clearly run over by the train.

It’s a shame how much expectation people have to live up to in the society these days – so much so that there has been numerous cases of suicide.

We hope at his extraordinary given second chance at life, he’d successfully recover from his depression.