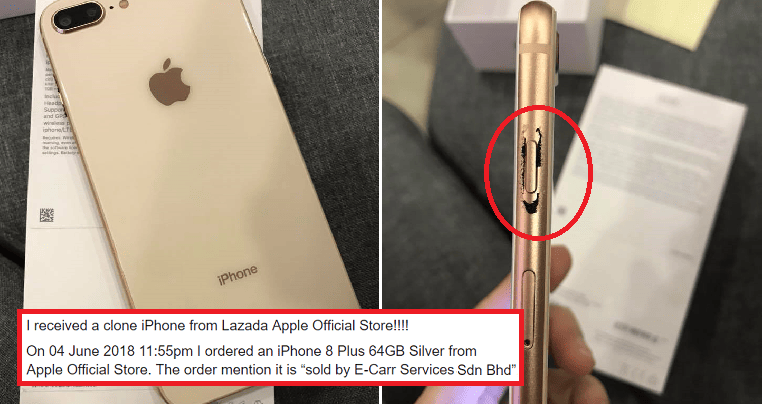 Buying things online is very much a part of our lives these days thanks to the convenience and often, we can get even cheaper prices than retail too.

However, sometimes we may be unlucky and receive something that isn’t quite exactly what we ordered just like this Malaysian lady who bought an iPhone 8 Plus. 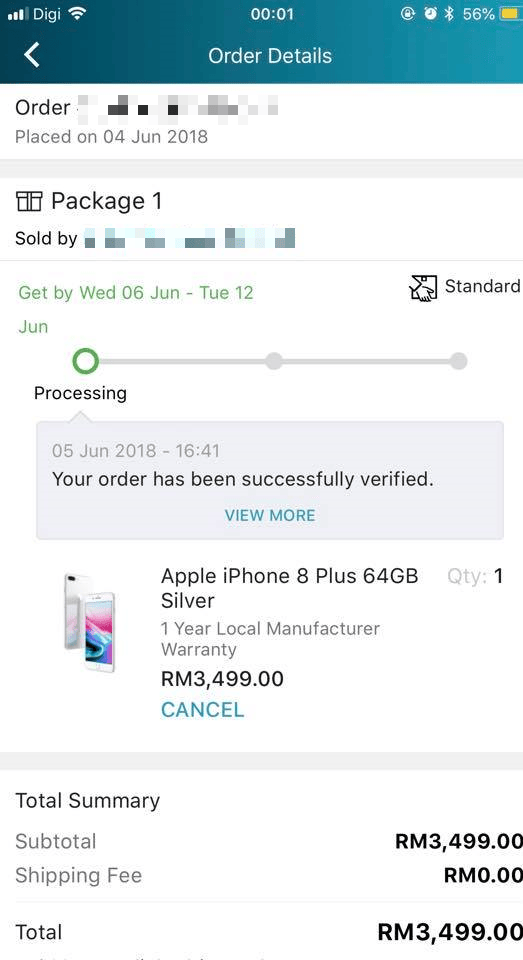 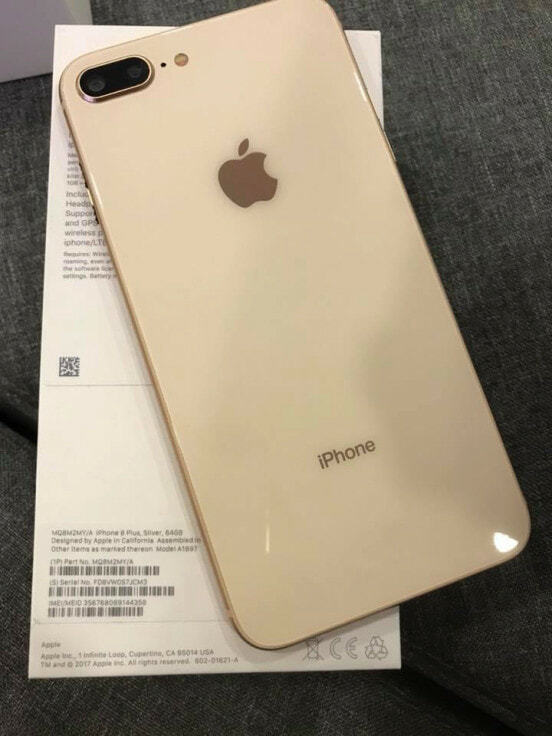 In a viral post on Facebook, she shared that she purchased the phone from a popular online marketplace on June 4 to replace her old phone but was shocked to find that she received a clone iPhone from the official store on the marketplace. Uh oh!

Upon unboxing it, the first thing she realised was that the phone was not silver as per her order but gold. She got even more suspicious when she found that it did not really resemble an authentic iPhone 8 Plus but looked more like a clever clone.

The girl cheekily wrote, “Being an iPhone super fan for so many years and so many generations, I believe that this is one of my talents to check if an iPhone is legitimate or fake.” 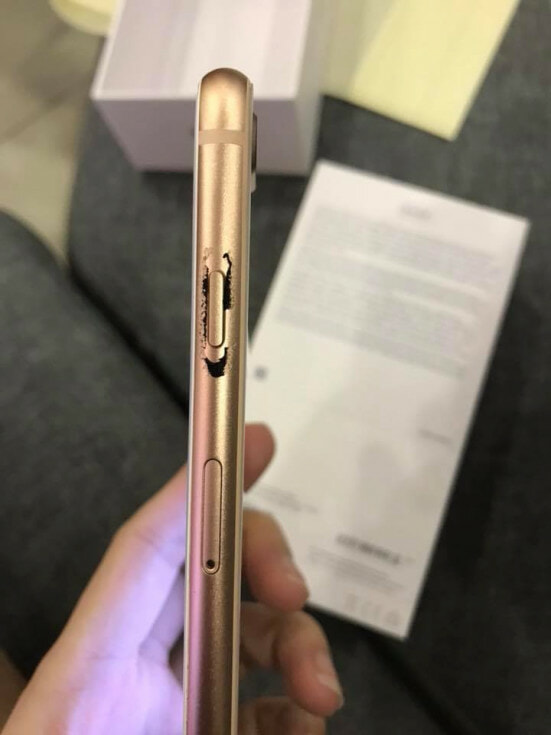 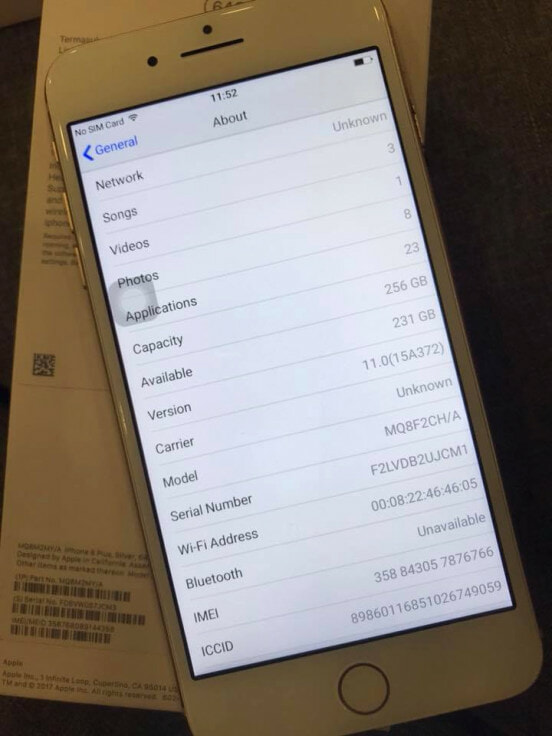 One of the red flags she discovered was the OS in the phone. It resembled the original iOS but there were minor differences. “My suspicions were further verified by checking the ‘About’ section in the phone! The capacity of the phone is 256GB, but I ordered 64GB. Plus, the Serial Number, Model, IMEI number inside is not same with the one displayed on the iPhone box.”

In addition, when she needed to update her WhatsApp, it directed her to the Google Play store instead! Everyone knows that for Apple devices, it should be the App Store! She also said that the accessories included in the box looked old and fake, while the phone looked rather bare which made her suspected that the phone was actually a clone model from China. 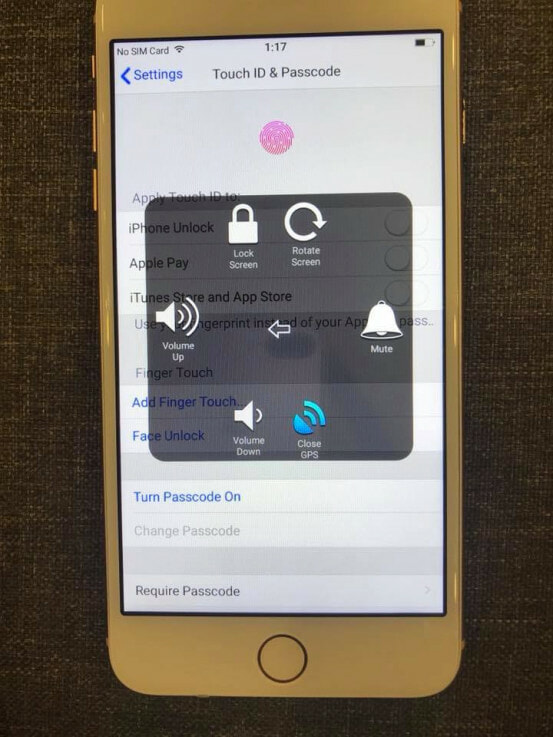 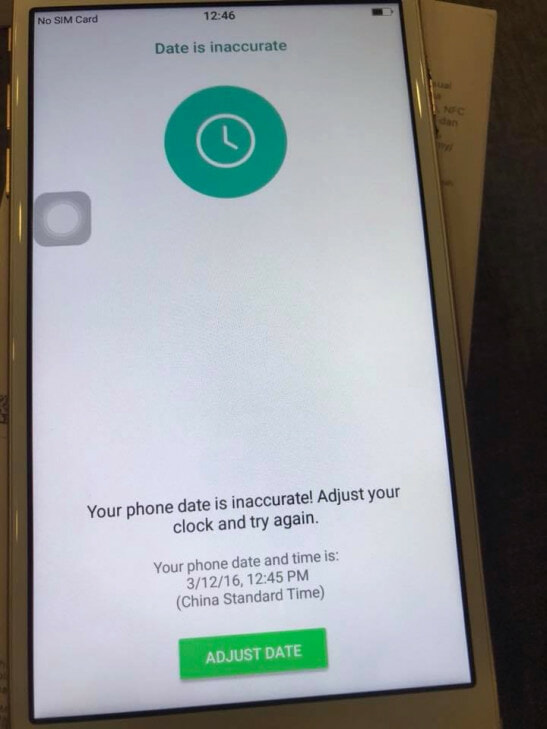 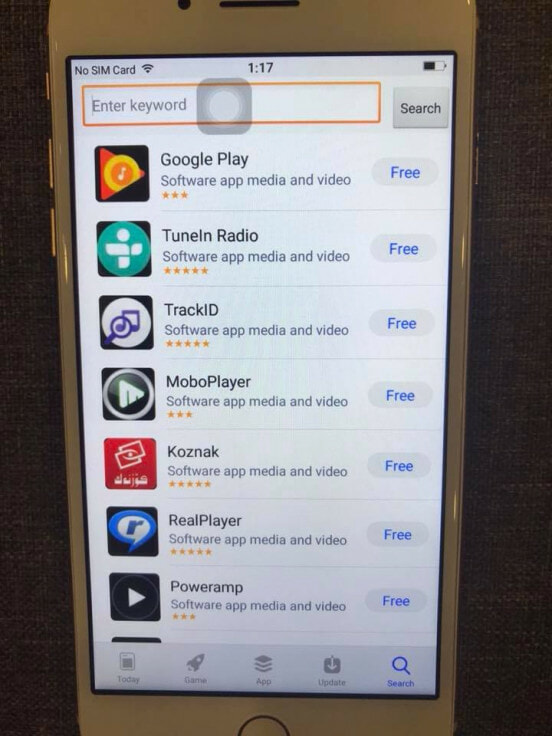 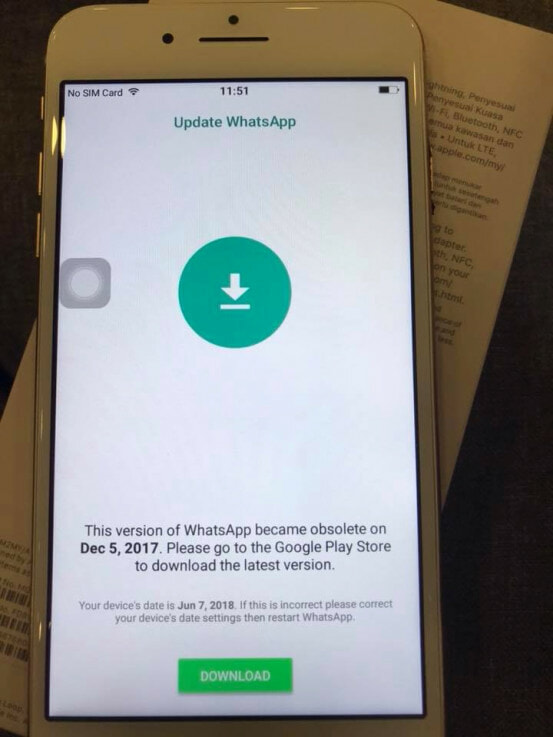 She reached out to the online marketplace to voice her concerns and they tried their best to resolve the issue.

In the midst of these negotiations, they said that they had noticed her Facebook post complaining about her purchase and requested her to delete the post. “They called back later offering me some other options such as replacement of a new genuine iPhone; or refund with extra RM100 Voucher code. At the same time, they noticed my Facebook post and requested that I delete this post when things have been settled.” 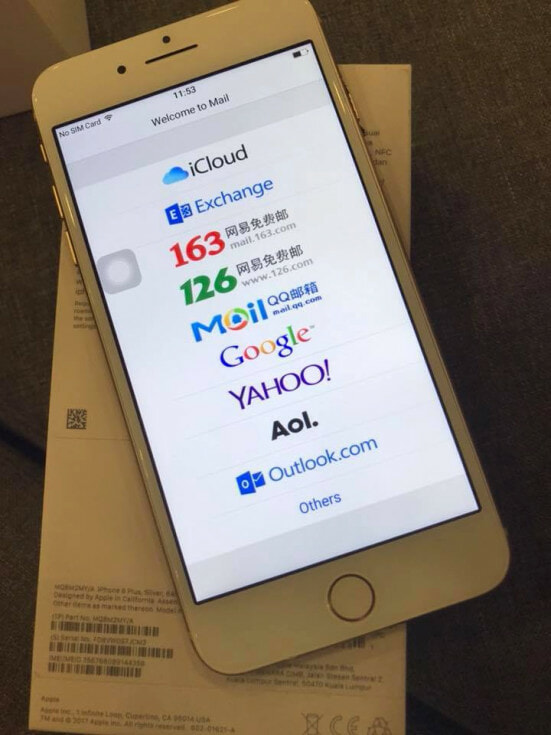 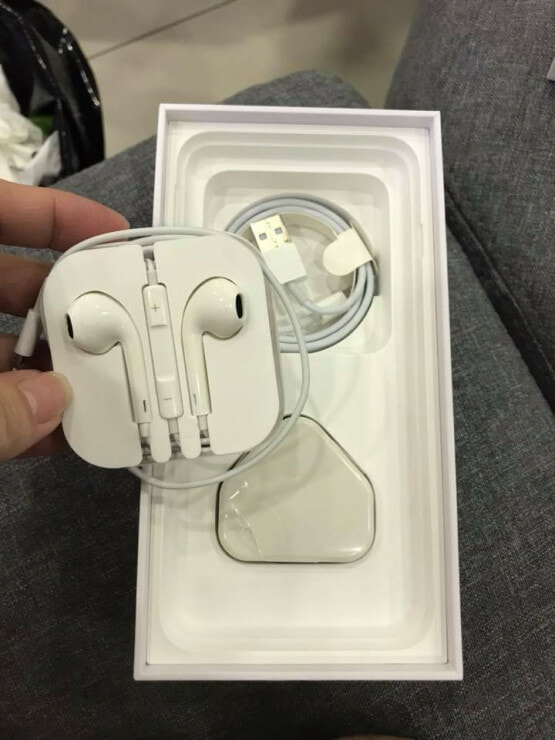 The disgruntled customer also lodged a police report and later, the online marketplace said that they would personally deliver the genuine iPhone to her while picking up the fake iPhone in return. Fast work eh! Just a few hours later, the new and genuine iPhone 8 Plus Silver 64GB was delivered to her and she has confirmed that she received it.

She said that she was impressed with the speed they handled the issue and managed to rectify her problem quickly. She is happy that she has gotten the item she purchased but she explained that she wanted people to be aware and check their purchases online. 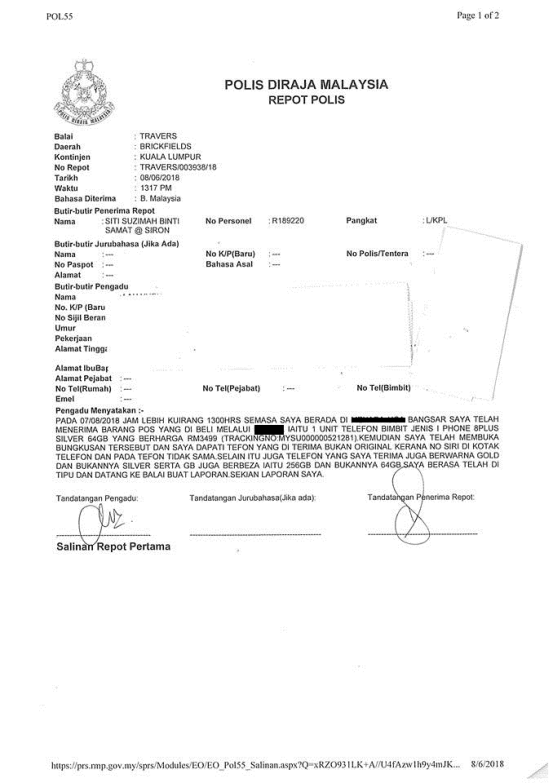 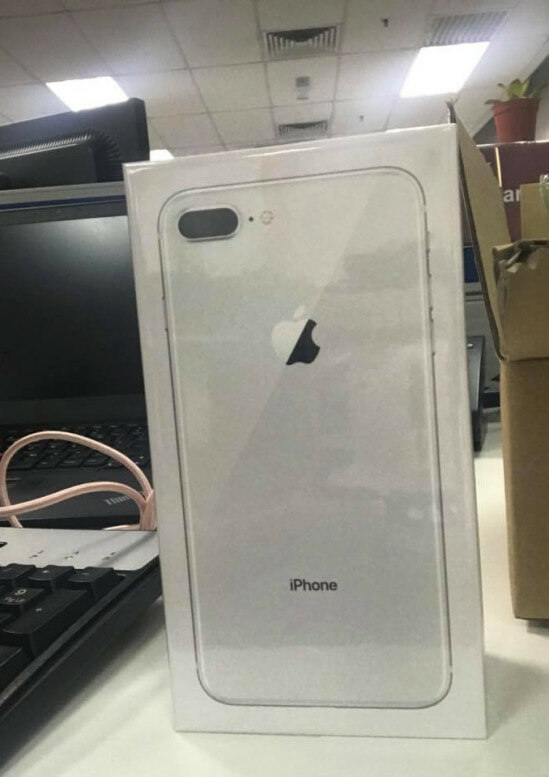 “I am not worried about the refund as I know I will get it back due to their refund policy. I posted in Facebook just to let people know that there may be clone iPhones from the online marketplace, ” she added.

Luckily the marketplace took action fast to rectify their mistake and the girl did not suffer any losses! Remember to check your online purchases next time! 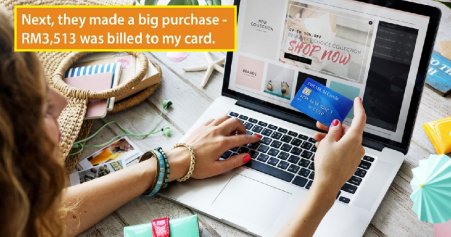